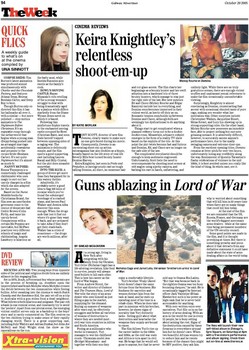 Th W e e ek QUICK FLICS
A weekly guide to what's on at the cinema compiled by UNA SINNOTT
CORPSE BRIDE: Tim Burton's latest animation was produced almost simultaneously with Charlie and the Chocolate Factory, and features Johnny Depp, Helena Bonham Carter, and Deep Roy to boot. Though Burton only codirected this film it has his hallmarks all over it, with a similar -- but more polished -- stop motion animation to The Nightmare Before Christmas. It's an enjoyable romp through the netherworld that begins when a young man (Depp) being pushed into an arranged marriage accidentally reawakens and proposes to the corpse bride (Bonham Carter). It's not quite Nightmare but it's almost as much fu .NANNY MCPHEE: Emma Thompson is a cosmetically challenged childminder who uses magic to sort out her unruly charges in a film which she also adapted for the screen. Based on the Nurse Matilda books by Christianna Brand, the film sees an unorthodox governess come to the rescue of desperate dad Cedric Brown (Colin Firth), and tame his unruly brood. Comparisons with a certain Ms Poppins are inevitable, but McPhee practices very different schools of magic and childminding. Angela Lansbury is hilarious as the batty aunt, while Imelda Staunton also excels as the family's cook. HOWL'S MOVING CASTLE: Hayao Miyazaki's rich retelling of the a young woman's struggle to deal with being dramatically aged by a jealous witch differs markedly from the Diane Wynne Jones novel on which it is based. Following this misfortune Sophie travels to the enchanted moving castle occupied by Howl (Christian Bale), and soon finds herself trapped between opposing sides of a raging war. The animation is deliciously simple, and the film sports a good supporting cast including Lauren Bacall and Billy Crystal, but the plot does meander somewhat. INTO THE BLUE: A group of divers get more than they bargained for in this watery thriller. Admittedly, it's probably never a good idea to bag 200 kilos of cocaine which you've found the submerged wreckage of a crashed plane, and heroes Paul Walker and Jessica Alba discover this soon enough. When the drugs mob that lost it find out where it's gone they want it back, and are prepared to take Alba if they don't get their stash back. Walker has a crisis of conscience -- the drugs are worth millions, after all.

and cut-glass accent. The film charts her beginnings as a bounty hunter and her swift adoption into a hardened trio of three bounty hunters, which manage to stay just the right side of the law. Her new mentors Ed and Choco (Mickey Rourke and Edgar Ramirez) include her in everything, and Domino soon becomes immersed in their violent world, as hectic off-duty as on. Romantic tension soon builds up between Domino and Choco, although both are seemingly too dysfunctional to do anything about it. Things start to get complicated when a planned robbery turns out to be a doubledouble cross. Meanwhile, a bizarre subplot emerges in the form of a reality TV show based on the exploits of the trio. At this point the plot twists become fast and furious and Domino, Ed, and Choco are no longer on the safe side of the law. The complicated storyline(s) should be enough to keep audiences engrossed. Unfortunately, Scott feels the need to overcompensate by shooting most scenes at odd angles using a jerky camera, and bathing his cast in harsh, unflattering, and

unlikely light. While there are no truly gratuitous scenes, there are enough violent scuffles and unpleasant sexual references to make the film occasionally uncomfortable viewing. Surprisingly, Knightley is almost convincing as Domino, counteracting that accent with occasional shouted rants of pure rage, making you wonder what her motivation was. Other surprises include Christopher Walken, Jacqueline Bisset, Mena Suvari, and Lucy Liu showing up in strong supporting roles. On the other hand, Mickey Rourke now possesses an immobile face, able to project nothing but one-note grinning menace. It is admittedly difficult, however, to accurately assess anyone's performance here, due to the madly swinging camera and extreme close-ups. From the excellent opening titles, Domino remains at fever pitch for over two hours, unfortunately losing any credibility along the way. Reminiscent of Quentin Tarantino's flashy celebrations of violence in the mid 1990s, it is best avoided unless you really like the kind of thing. In which case, see it.

Guns ablazing in Lord of War
why is worried about something that will kill him in 10 years time when there are so many things that could kill him today. At the end of the film we are reminded that the US, Russia, France, and Germany are the world's biggest mercenary arms dealers - while at the same time being permanent members of the UN security council. Some good points are made in the film, and it is thought provoking at times. But there is something preachy and pious about it that detracts from any definitive statement it could have made about the state of arms dealing affairs in the world today.

DVD REVIEW
MICKYBO AND ME: Two young boys from opposite sides of the political and religious divide form an unlikely alliance in this engaging film. Set in 1970, JonJo, a Protestant boy whose parents are in the process of breaking up, stumbles upon the impoverished and brash Mickybo when Mickybo crosses the divide between the two communities while fleeing bullies. After sneaking into the cinema to watch Butch Cassidy and the Sundance Kid, the pair set off on a trip to Australia with a gun stolen from a dead neighbour. What follows is both hilarious and poignant. The pair rob a bank in one comical scene, and constantly try to avoid the `peelers'. Apart from one pivotal scene, the emerging violent conflict serves only as a backdrop to the boys' story and is rarely commented on. The film centres on the two children trying to make sense of their rapidly changing world. There is a great supporting cast, including Julie Walters and Adrian Dunbar, but John Joe McNeill and Niall Wright steal the show as the rapscallions on the run.

t a young age, living in New York after emigrating with his family from the Ukraine, Yuri Orlov (Nicholas Cage) has a life-altering revelation. Like food Nicholas Cage and Jared Leto, Ukrainian `brothers in arms' in Lord to survive, people will always of War. need bullets to kill each other. sold any to Osama Bin Laden; enjoy a comfortable lifestyle. This is how his career as the "But that was because back in Yuri's brother Vitaly (Jared Lord of War began. the eighties Osama was too busy Leto) doesn't share the same From Andrew Niccol, the bouncing cheques," he said. He is fortune from the business. His writer and director of Gattaca occasionally tagged by Interpol fondness for narcotics and and The Truman Show, Lord of officer Jack Valentine (Ethan women distract him from the War tells the story of an arms Hawke) but such is his power at task at hand, and he ends up dealer who sees himself as just high rank that he is never held spending most of his time in a filling a gap in the market, accountable for anything. rehab clinic. When he does take supplying for the demand. With over-written voice-over part in missions with his brother, Buying up masses of weapons narratives, Yuri fills us in on the however, he shows signs of after wars end, he effectively history of arms-dealing. With an smuggles and bribes all varieties morality that Yuri distinctly arm in the world for one in every lacks - feeling guilt about what of weaons of destruction to 12 people, he is busy setting destruction and heartache the where they are needed most about arming the rest. Signs of civil war torn countries in Africa weapons they supply are bound the destruction caused by these to cause. and South America. firearms is everywhere around The film follows Yuri's rise up Posing as a millionaire who him but he doesn't care. When the career ladder in the 1980s works in transport, Yuri two beautiful African women try and 1990s, as the cold war ends manages to woo his childhood to seduce him and he resists and Africa is torn apart in civil crush - Ukrainian model Ava because of the chance they might war. He brags that he would sell (Bridget Moynahan) - and guns to anyone, but that he never be HIV positive, they ask him together with their son they

The Revs will launch their new self-titled album in Zhivago's, Eyre Square, on Saturday at 4pm with a free instore performance and album signing. Check them out on-line at www.therevs.ie