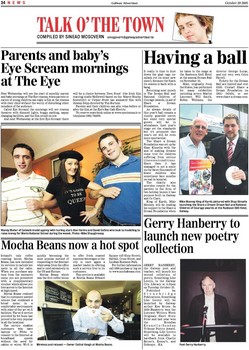 Parents and baby's Eye Scream mornings at The Eye
Next Wednesday will see the start of monthly parent and baby mornings at The Eye cinema, when parents or carers of young children can enjoy a film at the cinema with their child without the worry of disturbing other members of the audience. Called Eye Scream! the mornings will see cinema theatres with dimmed lights, buggy parking, nappy changing facilities, and the film sound on low. And next Wednesday at the first Eye Scream! there will be a choice between Tara Road (the Irish film starring Andie McDowell based on the Maeve Binchy bestseller) or Corpse Bride (an animated film with Johnny Depp directed by Tim Burton). Parents and their children can also relax before or after the film at the Eye's Bar Cafe Electric. To reserve seats book online at www.eyecinema.ie or telephone (091) 780078.

Having a ball
It really is time to dust down the glad rags (or splash out on some new ones!), because the black tie season is back with a bang. Returning next month is The Dream Ball and National Children of Courage Awards, in aid of Share a Dream Foundation. As always details of this year's ball remain a closely guarded secret but some very special guests will be in attendance. Last year's stage set the standards but it's promised this year's set will be even more spectacular. The Share a Dream Foundation was set up by Shay Kinsella with the aim of making dreams come true for children suffering from serious illnesses/conditions. Since then it has managed to put a smile on the faces thousands of brave children who sometimes face months on end in hospital. The charity also provides respite for the parents in the form of two holiday homes it has purpose built in Galway and Co Clare. King of Kards, Mike Mooney, will be lending his support to the Share a Dream Foundation when he takes to the stage at the Radisson SAS Hotel at the annual Dream Ball on November 12. Mike, originally from the States, has performed for many celebrities including actors Martin Laurence, Will Smith, Robin Williams, the director George Lucas, and our very own Colin Farrell. Tickets for the Dream Ball are limited and cost 100. Contact Share a Dream Foundation on (061) 343434, or see www.share-a-dream.com.

Ireland's only coffee roasting house, Mocha Beans, has now extended its services to include hot spots in all the cafes. When you purchase any item from the extensive menu you are presented with a complimentary voucher which allows you free access to the Internet at high speed. Mocha Beans realised that its customers needed venues that combined a broad menu in a comfortable environment with state-of-the art wi-fi facilities. The wi-fi service provided by bit buzz has proved to be very popular in all the locations. The service enables customers who have laptops or PDAs to connect to the Internet at broadband speeds without the need for cables or wires. Wi-fi is

quickly becoming the most popular method of connecting to the Internet while away from the office and is used extensively in the US and Europe. Mocha Beans which was the first coffee house

to offer fresh roasted espresso beverages to the city is once again a market leader in offering such a service free to its customers. This service is available at Mocha Beans Edward