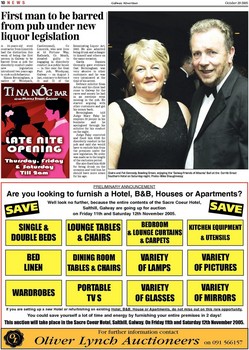 First man to be barred from pub under new liquor legislation
A 34-years-old steel contractor from Limerick had the distinction this week of being the first person in Galway to be barred from a pub for disorderly conduct under new legislation introduced two years ago to curb such behaviour. Simon Bermingham, a native of Woodpark, Castleconnell, Co Limerick, who now lives at 10 Fortune Way, Rathoath, Co Meath, pleaded guilty to engaging in disorderly conduct in a public house -- in this case the Goal Post pub, Woodquay, Galway -- on August 1 last, contrary to Section 8 (1 and 3) of the Intoxicating Liquor Act, 2003. He also admitted being drunk and a danger to himself and others on the same occasion. Garda Damien Gormally gave evidence that Bermingham was very abusive to other customers and he was very intoxicated at the time of his arrest. Defence solicitor Sean Acton said his client had come to Galway for the races and money he had in an envelope went missing in the pub. He started arguing with other customers and got his money back. Bermingham told Judge Mary Fahy he employs 30 people in his business and he apologised through his solicitor for his conduct on the night. Judge Fahy convicted and fined him 200 for disorderly conduct in the pub and said she would have to exclude him from the premises under the new legislation. No order was made as to the length of the exclusion period. She also fined him 100 for being drunk on the occasion and told him he should have more sense for his age.

Are you looking to furnish a Hotel, B&B, Houses or Apartments?

Well look no further, because the entire contents of the Sacre Coeur Hotel, Salthill, Galway are going up for auction on Friday 11th and Saturday 12th November 2005.

If you are setting up a new Hotel or refurbishing an existing Hotel, B&B, House or Apartments, do not miss out on this rare opportunity.

You could save yourself a lot of time and energy by furnishing your entire premises in 2 days!

This auction will take place in the Sacre Coeur Hotel, Salthill, Galway. On Friday 11th and Saturday 12th November 2005.