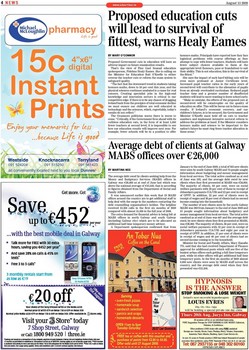 BY MARY O'CONNOR Proposed Government cuts in education will have an adverse impact on future examination results. That's the view of Fine Gael Seanad education spokesperson, Fidelma Healy Eames. She is calling on the Minister for Education Batt O'Keeffe to either reverse the teacher cuts or reform the exam system to safeguard quality. "The fact that the downward trend in students taking honours maths, down to 16 per cent this year, and the physical sciences continues unabated is a cause for real concern. Creating specialist jobs in the high-end knowledge and innovation sectors is critical to our competitive edge. If there is to be any chance of dragging Ireland back from the precipice of total economic decline we must ensure our children are well educated in technology and the sciences, which, regrettably, today's results do not reflect." The Oranmore politician warns there is worse to come. "Critically, if the Government fires ahead with its ruthless education cuts, in the form of at least 1,000 fewer teachers at second level, it is impossible to see how our education results will improve next year. For example, fewer schools will be in a position to offer

honours maths. Principals have reported how they face logistical problems with course offerings as they attempt to cope with fewer teachers. Students will have fewer subject choices available to them at the appropriate level (honours, pass or foundation) to suit their ability. This is not education; this is the survival of the fittest." She says the impact of such hard hitting cuts will be even more profound at Junior Certificate level. Increased pupil teacher ratios in the early years of second-level will contribute to the alienation of pupils from an already overloaded curriculum. Reduced pupil teacher time and a greater number of disaffected students will lead to more wanting to leave school early. "Make no mistake, the effects of the proposed cuts at second-level will be catastrophic on the quality of education on offer. This will be borne out in future exam results. If Ireland's economic recovery, and our children's futures, is to be secured, the Government and Minister O'Keeffe must hold off on cuts to teacher numbers and implement intensive sectoral reform to address the problems at hand. If the Minister considers honours maths and science to be important to the nation's future he must ring fence teacher allocation in these areas."

all conveniently located next to you local Dunnes!

will be holding a special private one day clinic