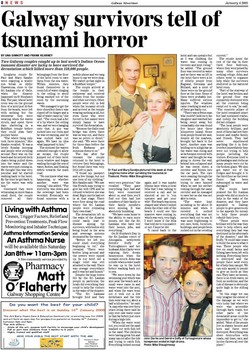 Two Galway couples caught up in last week's Indian Ocean tsunami disaster are lucky to have survived the devastation which killed more than 150,000 people.
Loughrea couple Dr Paul and Mary Sandys were enjoying a winter sun break in idyllic Unawatuna, close to the Sri Lankan city of Galle, when the disaster happened on St Stephen's Day. The pair, whose hotel room was on the ground floor of a hotel just 10 feet from the beach, were left with nothing but the swimwear they were wearing when the waves struck, and spent three days sheltering in a Buddhist temple before they could plan their journey home. "The whole thing only took three minutes," Mrs Sandys recalled. "It was a lovely Sunday morning and people were strolling around. Paul was on the beach and he noticed deck chairs being pulled down into the water and the waves were just coming in. He thought this was very peculiar and he started walking back to the hotel. By the time he got back to me the water was with him." Convinced they were witnessing no more than a small flood, the couple removed all their belongings from the floor of the hotel room to save them from the sea water. Within minutes, they found themselves in a room full of water clinging to the ceiling to avoid being washed out of the room by the oncoming waves. "We managed to get the door closed but then it was ripped off its hinges and a wall of water came in," she said. "The room had a bit of a lip where the ceiling was, and we were hanging onto that. A guy was sucked into our room and he was screaming, and he was sucked back out again. We have no idea what happened to him." The moment the waters subsided enough to allow an escape, the couple jumped out of their hotel room window and began wading through the sea of water, bodies, and floating debris towards the main road. "No-one knew what was happening, or whether another wave was coming," she added. "The electricity was down and the sewerage had been wrecked. Eventually we found someone with a mobile phone and we rang home to say we were okay. We ended up that night in a Buddhist temple." The couple arrived at the temple in their swimwear and received clothes from the monks and other survivors. Other people were still in bed when the tsunami struck and arrived at the temple wearing nothing at all, but even those who were forced to flee naked were simply happy to have survived the devastation. "Because the Galle road bridge was down there was no way out, and there was no petrol or diesel," she said. "We were there for three days before the Irish Embassy got someone down to us." The day after the tsunami the couple returned to the hotel to retrieve their belongings, but found there was very little left to pack. "I found my passport and a few things, but not one item of my clothing," Mrs Sandys said. "We saw this French man trying to give his wife CPR and he refused to believe she was dead. Rigor mortis had set in at that stage. There were fires along the road where the Sri Lankan people were cremating their own dead." The devastation left in the wake of the disaster could easily lead to disease among the survivors, with bodies still being found in the area and sewerage systems decimated by the waves. "Before we left you could smell everything beginning to rot," she revealed. "There were bodies lying around and the sewers were ripped up. In our hotel not a single toilet was still attached to the wall. There was sewage everywhere and it was hot and humid." Despite the huge losses felt by the Sri Lankan people in particular, the locals did everything they could to help the visitors in the wake of the disaster. "The Sri Lankans brought food and they

Dr Paul and Mary Sandys pictured this week at their Loughrea home after surviving the tsunamis in Thailand. Photo:-Mike Shaughnessy

Do you want the best for your child?
Discover what the best is on Sunday 16th January 2005
The Ark Early Years Care & Education Centres Ltd. is enrolling now for 2005 and will hold an open day for prospective parents on Sunday 16 th January between 3pm and 5pm. The Ark offers:
State of the art, purpose built facility to encourage your child's development Full or part time childcare from 3 months to 8 years Highly trained and qualified staff

were very generous," she recalled. "They gave everything they had and they were concerned about us, and then you'd find out they had lost members of their family or their family members were missing. It was absolutely humbling. "We have come home to the ability to earn more money, not like the Sri Lankans who have lost their homes, jobs, and everything." On St Stephen's Day in the Sri Lankan resort of Ahungalla, newlyweds Deirdre Duffy of Turloughmore and her husband John Clarke were enjoying their dream honeymoon when the tsunami struck. John was outside when a wave made its way up to the hotel before washing back out to sea. "We were down by the swimming pool which was also near the beach and a small wave came in and water went into the pool, and when the wave went out it took out a few deckchairs and the tide then went way out, about a half a kilometre," he said. "A man who was over forty years living there said he only ever saw water come in that far before just once during a high tide. "When the water went out, you could see the sand washed out with fish left in the sand. The children were having great fun and many ran out after the tide and trying to catch fish. Everything looked normal

again and it was maybe 15mins later when a local fella that I was talking to received a call and he shouted at me to 'run upstairs and get your wife'. The beach was moon shaped and when I looked down the other side of the beach I could see this massive wave coming in, which was very, very high. I don't know if the fella that told me to run made it or not. I hope he did. "I raced back to the

hotel and ran upstairs but as I was climbing the water was coming in torrents and kept rising," he added. "The ground floor was covered in water and as there was no lift in the hotel there were a lot of elderly people from England, Germany and Holland, and a most of those were on the ground floor at the time. Some of them were probably lost. Many suffered serious injuries. The windows came crashing in and a lot of them got badly cut. "There was a Swiss man who couldn't hold on to his daughter and watched her being swept away, but remarkably she was found five hours later three kilometres inland. Some local people found her and, despite all the mayhem, brought her back to the hotel. Another man was holding on to a high bar as the water was rising and as he became covered with water and thought he was going to drown the wall behind him collapsed and he was swept down a corridor and blown into the car park. The cars were swaying through the currents and he was trying to save himself when he saw his mother coming through the same corridor and he managed to save her as she was not able to swim. "The water kept pounding in for about 15 minutes and when it receded it sucked everything that was not secure back out to sea. It was most frightening to see cars, beds, furniture, buildings, and people been sucked out in the receding

current." The couple spent the rest of the day in their third floor bedroom, where they were joined by many other survivors seeking refuge. John and others went to organise help while the survivors sheltered in the battered hotel room. "Part of the stairway of the hotel was broken and the ground floor was completely destroyed with all the contents being swept out to sea," he said. "The concrete pillars of the hotel remained intact but had sustained cracks, and luckily the building did not collapse. "The local people were absolutely brilliant, and most of them had lost their homes and maybe family and friends. They had never experienced anything like it in their lives but immediately they were out trying to help people including the visitors. Everyone tried to get bandages and cloths as many people were cut by the broken glass. We also got water out of the fridges and brought it to the third floor as the lower floors had been submerged in water and damaged." The couple have praised the Sri Lankan people who did so much to help in the wake of the disaster, and they have appealed to Galway people to give generously to the appeals for money to help these people rebuild their lives. "These people were brilliant with the way they went to help others, and everything they had was destroyed in the aftermath of the disaster," said Ms Duffy. "It could take years to build the area to what it was. These people who live on small farms and fishing have been left with nothing. Everything there is destroyed and the people there need every bit of help they can get. We can only appeal to people to give as much as they can. They have no homes, there is no fresh water, no food, no medicine, and the risk of disease is obviously quite high in the stifling heat. "At this stage we can only imagine the extent of the damage as we were very lucky that where we were was accessible through back roads, but other parts of the devastated areas could be impossible to get to," she added. "Most of the people live in shanty houses and huts and these were destroyed. Everything was sheer destruction with roads, rail lines, cars, and lorries thrown all over the place."