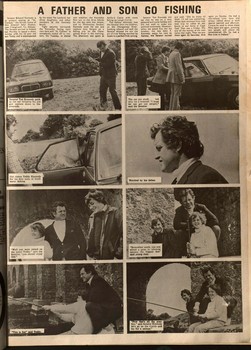 A FATHER AND SON GO FISHING
Senator Edward Kenned/ is at present staying at "St. Clerans," the former home of film director John Huston, near Craughwell, Co. Galway. The Senator arrived in Ireland last Monday to spend a short holiday with his 12 year old ton Teddy and is accompanied by his sister Pat Lawford, her three daughters, and other members of the Kennedy family. Tight security surrounds the Kennedys during their visit here and "St. Clerans" is completely sealed off to visi tors. On Tuesday, in dismal wet weather, the Kennedys flew out to the Aran Islands for the day with Aer Arann, and on Wednesday Senator Kennedy took his son and nephew Joey Gargan on a fishing trip on the Claregalway River in the morning. The afternoon was spent at Ashford Castle with more, fishing on Lough Corrib. The Galway Advertiser met the Senator with the children, on the Claregalway River. Looking relaxed and well the Senator showed his son the art of river fishing watched by locals in a perfect Irish setting. Senator Ted Kennedy did say that he was on a very personal and quite holiday and did not wish to make any political statements. However, when we asked him did his brother, the late John F. Kennedy, enjoy his visit to Galway, the Senator turned

and said: "Did he enjoy it! Well, I'll tell you something. When Jack returned from that Irish trip he called all the family to our home at Cape Cod. That was a Friday. We saw all the movies of his visit twice that night. Then we saw them again on Saturday. And

again on Sunday. He had a marvellous time here and always talked about it with special warmth and affection. I know he used to show those films again and again, pointing out people and places he remembered. Oh, he had a fine time in Ireland."