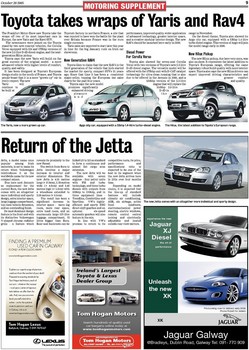 Toyota takes wraps of Yaris and Rav4
The Frankfurt Motor Show saw Toyota take the wraps off two of its most important cars in Europe, the new Yaris and the Rav4 SUV. The newcomers were joined on the Toyota stand by two new concept vehicles, the Corolla Verso equipped with 134 and 175bhp versions of the new 2.2-litre D-4D diesel engine, and the nextgeneration Hilux pickup. Toyota says the new Yaris will build on the great success of the original model - a more advanced vehicle with higher levels of comfort, quality, and safety. It has been designed at Toyota's European design studio in the south of France, and Toyota people boast that it is a more "grown up" car in every respect. The new Yaris will continue to be built at Toyota's factory in northern France, a site that was reputed to have won the battle for the plant over Britain because France was in the euro single currency. Yaris sales are expected to start later this year in time for the big January rush on Irish car showroom. performance, improved quality, wider application of advanced technology, greater interior space, and a creative modular interior design. The new RAV4 should be launched here early in 2006. range in November. On the diesel theme, Toyota also showed its Aygo city car, equipped with a 53bhp 1.4-litre turbo-diesel engine. This version of Aygo will join the model range early in 2006.

New Generation RAV4
Toyota likes to claim that the new RAV4 is the third generation of the vehicle that kick-started the market for sporty, compact SUVs 11 years ago. Since that time it has been a consistent major-seller, topping the European 4x4 sales charts for the past four years. Toyota says the new model promises significantly enhanced driving pleasure a n d

Diesel Power For Corolla Verso
Toyota also showed the seven-seat Corolla Verso with two versions of Toyota's new 2.2-litre D-4D diesel engine. The versatile model will be offered with the 175bhp unit with D-CAT catalyst technology for ultra-clean running that is also due to be offered in the Avensis in 2006, and a 134bhp version of the 2.2-litre engine that will replace the 114bhp 2.0-litre D-4D in the

The Yaris, now a more grown up car.

The Hilux, the latest addition to Toyota's European range.

Return of the Jetta
Jetta, a model name once popular among Irish motorists, is set to make its return when Volkswagen reintroduces it as the worldwide name for its new compact saloon. Due here next January as replacement for the current Bora, the new Jetta comes with an altogether more individual and sporty design, extra interior space, large luggage compartment, top class vehicle dynamics, and an outstanding finish. Its most dominant design feature is the front end with its distinctive Volkswagen V-shaped chrome radiator grille - a feature which reveals its proximity to the new Passat. The switch from Bora to Jetta involves a major increase in interior and exterior dimensions. The new Jetta is 4.55 metres long (+ 17.8cm), 1.78 metres wide (+ 4.6cm) and 1.46 metres high (+ 1.3cm) with a wheelbase extended to 2.58 metres (+ 6.5cm). The result has been a significant increase in interior space - more leg room, more rear space, extra head room, and an enormously large 527-litre luggage compartment, 72 litres bigger than Bora. Rear seat backrests can be folded 1/3 to 2/3 as standard to form a continuous and almost flat cargo area extension. The new Jetta will be available with seven engines - four petrol units with FSI and turbo technology, and three turbo diesels with outputs from 102bhp to 170bhp, and in three equipment lines Trendline, Comfortline and Sportline. VW's highlyefficient and sporty DSG direct-shift gearbox and an optional six-speed automatic gearbox will also feature in the mix. In line with VW's promise to return to its competitive roots, its price, performance and specifications ratio is expected to be one of the best in its segment when the new Jetta arrives here in little over four months time. Depending on model choice, it is expected that the line-up of standard features will include climatic air conditioning, ASR, six airbags, active front headrests, electromechanical power steering, electric windows, remote control central locking and electrically adjustable and heated outside rear-view mirrors. The new Jetta comes with an altogether more individual and sporty design.