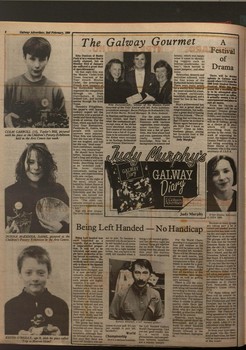 The Galway Gourmet
botany, which was handy when it came to identify ing v e g g i e s such as boletus (mushrooms, no less!), black berries in sauce(junipers), and other items. Relaxation, desserts and festivities followed, with the fine wines of the Rothschild family flowing. There were many prizes for a worthy Rita, cases of the most wonderful wines, a framed certificate, beautifully designed, and a meal for two in the Grey Door. Rita's achievement has Rita Dunican(left), winner of the Mouton Cadet Gourmet of the Year Award with MS. Polly Addelsee, won her a great deal of promotions manager. Baron Philippe de Rothschild LTD, congratulations, but sadly, also a great deal of teasing and Robin Bums, Brand Manager, B. Daly, Ireland. in Russian and Scandina vian cuisine, and that's what the contestants got, except none of the dishes were identified. After the first course of two starters there was a list of 10 ques tions to be answered Later the dishes were revealed to be Scallops Rothschild and Pelmini Siberienne! For the main course there were Medallions of Venision with various vegetables, some strange, some f a m i l i a r . A g a i n there was a list of ques tions, this time about food and wine, questions which really tested the knowledge. Rita has a background in science and from her friends. "The on ly thing that terrifies me is that I'll never be invited to dinner again because peo ple think that I know so much!" Come on folks, kindness please, among her favourite food is the humble boiled egg!

Rita Dunican of Bushy Park is'nt a woman that is easily stunned, but on Monday 23rd of January she suffered a great dose of speechlessness! On that night Rita won the Mouton Cadet/Irish Times Gourmet of the Y e a r A w a r d . Mouton Cadet, the prestigious French wine company of the Rothschild family organised the competition through its Irish Distributors, B . D a l y Ireland Ltd., and invited entries through the Irish Times. Theodora Fitzgibbon, the paper's well known cookery expert set the questions over a period of weeks and there were hun dreds of entries. For the final, which was held in the Grey Door Restaurant, Pembroke St., Dublin, ten correct COLM CARROLL (13), Taylor's Hill, pictured people with selected. answers were with his piece at the Children's Pottery Exhibition Rita was informed When held in the Arts Centre last week. that she was one of these, her son laughed, and told her she was "dead meat". Such confidence, needless to say, was reassuring! He should have known better, because Rita has had a long and abiding in terest in cookery and cook books, describing herself as an "armchair cook". She loves visiting restaurants, tasting new dishes, and experimenting with new recipes. However on the night of the m e a l , which w a s hosted by Robert Burns of B. Daly, and which had representatives of the Rotschilds and the Irish Times she herself felt more than a bit apprehen sive. "The other con testants seemed so much more knowledgeable than I felt." Was she ever wrong! The Grey Door specialises

Festival of Drama
There will be drama aplenty in Galway next month when UCG hosts the 1989 Irish Student Drama Festival While this may. sound like a mouthful, on ly to be attempted after beverages such as coffee. It actually means a lot of entertainment and plays to suit all tastes. F r o m the 7th-llth of March there will be no escape! D r a m a groups from all the Universities, N I H E s and teacher train ing colleges in the country will be in Galway, giving us a choice of 25 plays which will cover everything from the serious to the comic. The work of organising the event, the biggest Student D r a m a Festival yet, is in full swing according to E m e r Sloyne of UCG's Dramsoc who is this years secretary of I.S.D.A..

Being Left H a n d e d -- N o Handicap
DONNA McKENNA, Saltfall, pictured at the Being Left handed was Children's Pottery Exhibition in the Arts Centre. once r e g a r d e d as a
tragedy, and as deviance of unparallelled propor tion. It w a s not to be tolerated, and many peo ple have memories of be ing forced to conform, in deed sometimes the methods used were second only to those of the Spanish Inquisition. However things have changed, and it is now perfectly permissable, indeed almost a virtue to be left handed, such people are highly creative, it is said. What a change - now left handers are a force to be reckoned with, and most formidable of all left hand ed groups is the Left Hand ed Golfers Association. Members see themselves as being unusual and are happy to be so. Vive La Difference, you will hear them say as they swing their clubs wildly and left handedly around any and every golf courflfc The group has been in Ireland since 1963 and has branches all over. Here in G a l w a y there a r e 45 members, although Ron nie Attwooll of the Associa called tion says that there are some left handers who opt
s

not to join. To become a member you do not have to be left handed in all areas of your life, for instance you can be a right handed writer, but you have to be 100% left handed when it

being a left handed golfer, and last Monday night the Galway Gang got together for its A G M . What an ex citing time lies ahead, for this year the G a l w a y Association is organising

left handed golfer!
the Left Handed Golfers World Championship. I kid you not, good reader, this Jfcjs. a world wide phenomenon, and competi tions between members are a regular feature.

comes to your golf. It's not just enough to putt left handedly!

KEVIN O'REILLY, age 8, with his piece 'Trip to Mutton Island'.

World Championship
So it's a serious business

For the World Cham pionship it is expected that four golf courses in the area will be taken over by the dreaded left handers. There will be 100 such peo ple on each course, and when you add spouses and companions to this, it pro If you feel like having a mises to make for a pret feast of drama it might be ty exciting event. Even a good idea to avail of the more so when you consider that all members of this all inclusive ticket which organisation take enjoy , will allow you special rates to the different plays. You ment as well as golfing can contact the Committee very seriously! members at 21 Cherry There is still the occa Park, Newcastle, or the sional problem associated Student's Union Office, with being left handed and UCG. according to Ronnie, even For those taking part normally happy left hand there will be awards for ed golfers do have the odd Best Actor, Best Actress, cross to bear. For instance Best Production and Best when it comes to getting Director, but for the au quality clubs there just diences it promises to be is'nt the same choice for five days and nights of en those who are not right handed, a situation which joyment. The Festival is being sponsored for the se needs to be altered. cond consecutive year by However, such minor Maxwell House, a com problems cannot daunt the pany which takes it's in determined, and if you volvement with things ar want to meet kindred tistic quite seriously! spirits and golfers, contact So keep your eyes open, Ronnie Attwooll at the Great Outdoors, Eglington all people who like these kind of festivities, for there St.. will be more news to come of this event!

Because so many groups are taking part a lot of venues are needed, and the committee has been work ing day and night to ensure that there is no shortage! The groups will be using the Aula and the German Common Room on Cam pus, the old I.M.I, building and the Art's Centre in Nun's Island, and the old Grammar School in Col lege Road. It's definitely a case of D r a m a all around.