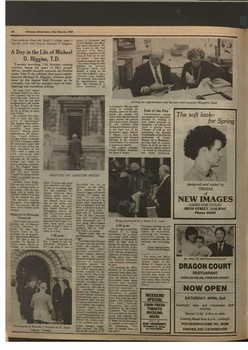 A Day in the Life of Michael D. Higgins, T.D.
Tuesday morning, 7.45, Station, raining (variety being the spice of life), people shiver, shuffle sleepily towards the Dublin train. This is.the tableau that meets multifaceted Michael D. Higgins, Galway glad iator in the famed Dail Eireann, as he stoically sets off for another bout of tidefighting and socialism selling.
He looks tired. Shakes my hand. Points out, like a true comrade, that we are not in first class. Takes out a fag. Yes, be has bad acupuncture, tbe works in fact. Stayed off them for six months but assures me he is giving up again next Friday. He consults the diary. Life is hard and then you've an appointment! The Higgins tome suffers, if today's agenda claims normality, from acute obesity. Being party spokesperson for Educa t i o n , Y o u t h Affairs, Foreign Affairs, Gaeltacht and Irish Language, might the uninitiated might well do so. On top of that the other two-thirds of the T.D.s work is taken up w i t h c o n s t i t u a l and legislatory functions. Rhyming off the various settings and dates of clinics, meetings, speeches, etc., Mr. Higgins' mindbogglingly demonstrates that the man labled 'Yuppie' for toting a fearful Fubfax is probably just an ordinary T.D. Socialists never forget. This one also writes for H. Press, a national tablet to the young - this, he says, keeps him in touch. He confides, believe it or not, that he compiles the odd 1,800 characters required fortnightly while making this very jour.iey. We sit there quite stunned at his energies.

bunch of Economic and Social sidekicks who talk to him about Education. We have lunch in the Dail canteen with Betty Dow ling, a member of the Gang of Four (as he told me earlier). 'I have four women to organise my life' - the others being his wife Sabina, his secretary Margaret S h e i l and Maire, a being of the same class as Betty - party volunteer, twice weekly). She modestly titles herself his 'appointments secre tary'. But Michael D. is more flaithiul - he

Sorting out appointments and the post with secretary Margaret Sheil.
is prominent. His eyes half closed, he twiddles his thumbs, gazes at his biro, stands up, speaks, sits down, looks like the boss all right, repeats the process half a dozen times. Michael D. sits between Dick Spring and Maureen Quill, in the front row of the horseshoe's apex. Deputy N. Blaney, T.D., is most conciliatory and forward thinking in his sensitive contribution. It is resolved to resolve to resolve. The subject changes. Social Welfare. Suddenly the place is empty.

End of the Day
Circumstances dictate our departure at this point. Michael D . wishing us luck, rather overruns our timetable - at 7.00 he will m e e t a g r o u p from Tallaght, at 8.00 he will accompany the Russian Ambassador to the Peacock production of Gogols 'Diary of a Madman', arriving back at Leinster house at 10.30 on time to vote on the 'matter in hand' - to which he contributed two weeks previously.

inniu. "A great man, great poet, a humble, wise man", he says to us looking back over his shoulder. St. Agnes' Church. M e n outside speak Irish in chiming happy rhythms, and quaintly touch their caps as the public man passes, enters the quiet grey chapel. Michael D. sympathises nearer the altar. We sit in an alcove. The coffin is simple, sparsely adorned. A harpist plays sad Gaelic balm. You sense some spirit, some simple wisdom is here, or has just left, a word, a voice, or a soul.

describes her as an 'adviser'. In his office, Betty introduces me to Emmett Stagg, with whom Michael D. shares the room. "Ye can take my
chair but not my Seat", he

designed and styled by TREASA

quips, after enquiring if I'm a "millitant" from the West. I tell him I'm on the payroll at yours truly good old G. Advertiser.
"One of those giveaway rags, heh?' I assure him

most strenuously not. A loud 'gong', like a broken Angelus, comes over the speakers, like* in '1984'. Tbe Dail is in session. Please read this in parliamentary lang uage: One looks down through the glass into the pit from where the country is governed. One subse quently perceives a distinct hiataus between the quota of seating apparatii available and the amount of political posteriors present. On resuming one's composure and ruffled cogency one is visually accosted by the 'shape 'em up' side of the Lenihan broods "shape 'em up and ship 'em out" Cabinet condoned cam paign. Mary O'Rourke in the make-up. She talks at the assembled throng (numbering Michael D . , the other parties' education spokespersons, and a few beleagured waifs who got lost going somewhere eke) in an angelic tone reading prepared replies. To a deputy who became agitated (something about a school disintegrating) she lightly admonishes that it's daffodil day, which it isn't in her motherly way. The subject changes. AngloIrish relations. The place fills up like a cistern. C. H.

4.30 p.m.
On the steps of the Dail, Michael D . is being interviewed by a Swiss television crew about emigration. A businesslike affair, he looks used to having the glaring camera shoved into the face. Later, in the visitors' bar (Coffee, Club, Biscuit, compulsory cigarette), he admits to not having eaten since 7.00 a.m. Anorexic tendencies came in handy, sometimes, he says. On entering the office, Michael D. is promptly presented with more post. Included in the forty odd items are notices from a Guatemalan trade union (buued) and Swedish Peace Commission (Scoldonovich postoal), a M o s c o w acquaintance (discursive), a granny cribbing about loud music (irate) and a myriad other 'causes'. His question on Eisc T e o . , informs M a r g a r e t , has been disallowed by the Ceann Comhairle. The workers have just been on the radio saying that nobody has helped them at all. Michael D. looks, for the first time a bit choked on the ropes of this bureaucracy. "You can't sit around here, so you can't".

The writer and photog rapher would like to tend their sincerest thanks to Mr. Michael D. Higgins for his gracious toleration of them for one whole day, and for the more than generous treatment accorded them during that period. Greetings also to his kind helper, Betty Dowling, and everyone who knows us. Howya.