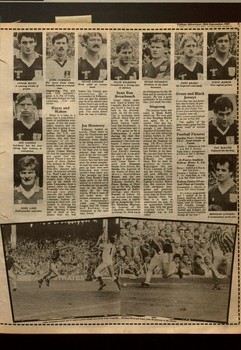 SYLVIE LINNANE Rock solid at corner back. before Joe Cooney gets possession. H e is surrounded by Kilkennymen yet gets his palmed pass in to be missed once before Noel Lane with an innocent enough looking shot steals the winning goal. You could almost near the roar in Galway.

PETER FINNERTY Brilliant in the final moments. the Philippines for the '80 final and he savoured the success. H e was a great midfielder in his student days. Just made the train.

Hayes and Mhn ao
There is a time in a game that is even when a spark of inspiration wins a game. It sets the scene alight, inspires and the team that is going to win takes over. J o h n D o n n e l l a n the T . D . and former football captain believes this and first brought it t o my attention. Last Sunday's spark that set the game alight came from the captain C o n o r H a y e s . H e beat his opponent fair and square then was fouled. Placed it into the hands of Steve M a h o n who pointed in brilliant fashion. This was it. Fifty-five minutes had gone. Mclnerney still the star. N o e l L a n e on and he makes an impression straight away. T h e n the save of the match by J o h n C o m m i n s from a palmed effort by L i a m F e n n e l l y who was clean through (our photo captures this superbly). Another good save by Commins. Galway are coming at them now. Joe Cooney is showing his class u p front. E a n n a R y a n showing a clean pair of heels at last, almost loses the ball

Joe Hennessy
Kilkenny battled on bravely. None more so than the Hendersons and that superb hurler Joe Hennessy whose display in the dying minutes is a rich memory. For Galway no one was better in the final ever so long minutes than our top back of the last two years Peter Finnerty. The Galway fans had now cast aside the defeat complex. So had the team and the pent u p fears were now banished and wires couldn't keep them .out. Thev invaded the field after Tony Keady's long range point in the 69th minute in a foolish act of unbridled joy but quickly went to the line and waited for the lone whistle. When it came all hell broke loose. All Ireland champions again in the championship's 100th year. National League and All Ireland and Railway C u p champions at the same time. Sweet.

Conor Hayes spoke It was there they had hurlers well. Hard to follow Joe Now they're nearly all gone Connolly. But he did well May their fame live forever and found it hard to get Like the great Father Tom back to the dressingIn their green and black jerseys T h e journey home was room. As did the team. I remember them still super as S e a n Kelly This is becoming more Here's a toast to you Claddagh would say. W e were glad difficult. Many hugs and At the fool of Fair Hill. to hear S t e p h e n R o c h e kisses on the ground. won again. H e is a T h e quality of the Broad Galway smiles. winner. Nice guy too. game wasn't great but the Sean Ban Breathnach - a T h e singing started early sweet smell of success great Galwayman said it enough. I saw Mairtin was . . . all: " I t ' s g r e a t t o b e a Standun of Spiddal there. G a l w a y m a n . I cried I first saw him following d u r i n g t h e l a s t few Galway hurlers in 1951. minutes of m y com Loyal to the core. As we Sunday Next - Galway m e n t a r y " . His voice was crossed t h e Shannon we SJ'.C. Semi-Finals at hoarse. I waited outside sang The West's Awake Tuam. the dressingroom to meet and believed it. At last we Corofin v. Milltown at 2.45 the team and officials. had proved we were the p.m. Ref. P. Ferriter. Cyril Farrell's beaming best hurlers in the land. Tuam Stars v. Annaghdown face told it all. It was after We can now hurl the best at 4.00 p.m. Ref. S. McMansix o'clock before they of them, Cork, Tipperary, amon. emerged. A shake hands Kilkenny, you name with Conor Hayes. A At Pearse Stadium them. But we must be word with Eamonn Galway Minor F. Ch. gracious in victory. D o y l e (Eyre House), S r . Final. B e g r u d g e r s like o n e S h e i l a (the Superior of Bama v. Salthill at 2.30 p.m. Kevin Cashman of Cork the Sisters of Jesus and Ref. Des Joyce. and the Sunday Tribune Mary), Geraldine Carraroe v. Killanin - Inter will have difficulty in R u a n e and her son F. Ch. Semi-final at 3.45 finding words even Brian, a sister of the two p.m. Ref. Denis Ryder. poltogs to explain away Kilkenny brothers, F r . Galway's success. Before Galway Junior A Foot P e t e r Q u i n n , ex Mayo this, this creature from ball Final at Corofin. star of the 50's, P a d d y Cork castigated, deni Glenamaddy v. Mervue at F i t z p a t r i c k of Ballingrated and positively 6 p.m. Ref. Gerry Guinan. skelligs and G e r r y insulted Galway's hurlers P e n d e r of Arklow. All It's a busy programme every time he found time the neutrals were happy and I expect to be in to mention them. But Galway won. A speedy Pearse Stadium and in then it is hard to lift to Kingsbridge from Corofin with a chance of a understand the man. As Fr. Nicholas Murray, short visit to T u a m as we approached Galway the Superior of the well. Corofin, Annagh that man with the good down, Glenamaddy, Columban Missionaries singing voice T o m Salthill and Killanin are in Navan. F r . Nick was in Gallagher was in full favoured to win. Could be voice. wrong all the way !