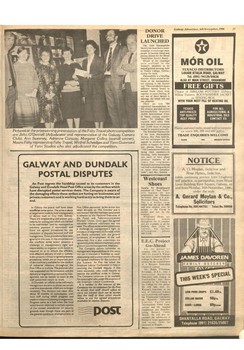 DONOR DRIVE LAUNCHED
The Irish Haemophilia Society has launched a major campaign to encourage more people to become blood and plasma donors for the Blood Transfusion Service Board. Details of the campaign were outlined to the Society's members at its annual general meeting, held in Trinity College, Dublin, during the week. Haemophilia is a bleeding disorder which results in the blood of the haemophiliac not clotting in the normal way. There are about a dozen different factors found in normal blood which work together to cause clotting. If any one of these factors is missing, the blood will not clot properly. There are over 300 registered haemophiliacs in this country and each severe haemophiliac requires 24,000 International Units of blood clotting concen trates. T o produce the required units solely from Irish plasma it was estimated that 12,000 litres of plasma would be required annually. The National Chairperson of the Irish Haemophilia Society, Mrs. Pam Aldrich, told this newspaper that she appeals to members of the public to support the blood and plasma donor drive. "The fundamental difficulty facing their members--is bleeding. Irish haemophil iacs need to have glood products available at all times for t r e a t m e n t . Repeated untreated bleeding can lead to disabling arthritis or cause other complica tions", said Mrs. Aldrich.

at the prizewinning O'Donnell Ann Sweeney, Fahy of Yann

of the Fahy Travel photo of the Galway Collins (overall and Yann competition. Margaret the

GALWAY A N D DUNDALK POSTAL DISPUTES
A n P o s t r e g r e t s t h e h a r d s h i p caused t o its c u s t o m e r s in t h e G a l w a y and D u n d a l k H e a d P o s t Office areas by t h e strikes w h i c h h a v e d i s r u p t e d postal services t h e r e . T h e C o m p a n y is a w a r e o f t h e d a m a g i n g effects t h e s e strikes a r e h a v i n g o n businesses a n d p r i v a t e c u s t o m e r s and is w o r k i n g hard t o t r y t o b r i n g t h e m t o an end. In Galway the postal staff have taken unofficial strike action. The strike is about arrangements made by local management to deliver mail to City Hall, Galway. There are longstanding and proven pro cedures for testing jobs which are claimed to be overloaded (and for retrospective overtime payment if warranted) and there are agreed procedures for the resolution of disputes between staff and management. These procedures have been ignored in this case. In the circumstances the unofficial strike action presents a challenge to management's right and responsibility to organise work duties as required so as to ensure the efficient, cost-effective delivery of mail in Galway. It also presents a threat to agreed grievance procedures which are an important part of the machinery available for the conduct of industrial relations throughout the Post Office as a whole. The postman who was suspended can be reinstated, and the delivery arrangements proposed by man agement can be tested, as soon as the staff concerned return to work. In Dundalk, an official strike followed a management decision to phase out certain overtime attendances which are no longer necessary. This decision was taken after about 18 months of consultation with local staff during which progress was made inrelationto phasing arrangements. Progress came to a halt when the local union branch objected to certain aspects of the revised attendances on security grounds even though these are part of the general conditions of employment of Post Office personnel. Strike action was taken abruptly on 19th October and it was learned that this had been sanctioned in advance by the National Executive of the Postal and Telecommunications Workers' Union. Once again the agreed industrial relations machinery was not used. The official strike action constitutes a challenge to management's right to introduce arrangements in Dundalk which are clearly consistent with the general conditions of employment of the staff concerned. And it also undermines the agreed industrialrelationsmachinery which governs union/management relations. The Company cannot surrender its management responsibilities to the union nor can it maintain a 'business as usual' relationship with a union which is flouting the agreed machinery for the conduct of that business. An Post has asked the Employer Labour Conference to help in resolving the Dundalk dispute. If this were successful, talks could resume to resolve the unofficial strike in Galway. The Company continues to be available for meaningful talks under the auspices of the Employer Labour Conference. ft is neither IN THE interest OF THE
COMPANY NOR ITS CUSTOMERS FOR AN POST TO ACCEPT that STAFF SHOULD REFUSE to

Nuala N i D o m h n a i l l presenter of "Suil Thart" will feature on her programme on Monday, November 10th at 8 p.m. Westcoast Shoes, Westport. This is a workers co-op which was set up in 1983 and now employ over 50 people -- the Co-op is owned and run by the workers. Westcoast Shoes are distributed widely throughout the 32 counties and are available in all the leading shoe shops in ( i a l w a y . For further information phone 098-25320.

E . E . C . Project Go-Ahead
For the period 1st October, 1986, to 1st July, 1987, Dr. Joseph A. Watson has been seconded from the College to direct an E.E.C. project on the establishment of a Business Innovation Centre in Galway. Mr. Ralph O'Gorman, B.Comm., M.B.A., who is Industrial Marketing Executive with Udaras na Gaeltachta, has been seconded by the Udaras to the College for this period. He will take over Dr. Watson's functions in the area of Industrial Liaison and in particular w ill support the Presidential Corcmittee on Research, Industrial L i a i s o n , Patent and Development Fund Com mittees and the Applied Geophysics and Manufac turing Research Centre Boards. He will also co ordinate the submission of Research Grant applications and accept items for inclusion in Nuacht.

carry out NORMAL WORK NOR to accept

that the staff or their union SHOULD
REFUSE to use the AGREED PROCEDURES AVAILABLE to RESOLVE DISPUTES.