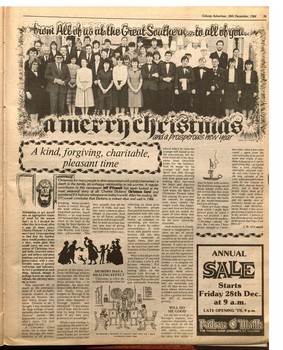 ma prosperous mwlfear
school where he views his younger self seated in the old schoolroom, left be hind while all of his class mates head cheerfully home for the holidays. And he weeps for his younger self. And the Spirit leas him through successive years, showing him how greed and selfseeking have narrowed his heart and deprived him of love and family. And when the Spirit of Christmas Present takes him among the poor and the outcast, he realises even more clearly the simple truth that happi ness and love are beyond price and yet within the reach of even those that the world would judge to be the most outwardly miserable. And memory is closely related to imagination. It takes an act of moral imagination to picture ourselves as we were, and to see ourselves as we have become. It takes an even greater act of imagination to see ourselves as others see us, and the experience is often a painful one. And Dickens asks us togoeven further -- to imagine the world as it is seen and experienced by others, especially those others who arc not as fortunate as we are. And that en compasses not only those who are materially less well off than we are, but those whose deprivation is hidden and inward, and is often a greater hell than any hell of material poverty. mas time, when it has come round - apart from the veneration due to its sacred name and origin, if any thing belonging to it can be apart from that -as a good time: a kind, forgiving, charitable, pleasant time: the only time I know of, in the long calendar of the year, whenmenandwomen seem by one consent to open their shut-up hearts freely, and to think of people below them as if they really were fellowpassengers to the grave, and not anothe race of creatures bound on other journeys. And therefore, uncle, though it has never put a scrap of gold or silver in my pocket, I believe it has done me good, and will do me good; and I say, God bless it!" J. W. O'Connell

Christmas for many people is often associated with painful memories - a death in the family, an unhappy relationship or job worries. A regular contributor to this newspaper Jeff O'Connell has again looked at the most seasonal story of all: Charles Dickens' Christmas Carol and wondered if it had any relevance on today's world. After his reading, Mr. O'Connell concludes that Dickens is indeed alive and well in 1984. grasping, mean-minded, cynics, is visited, through the kind offices of his Attempting to get myself long-dead partner, Jacob into an appropriate frame Marley -- an even worse of mind for the season old buzzard than Scrooge that's in it, I decided the when in the land of the other day to re-read, after living, by three Spirits: of a gap of many years, Christmas Past, Christ Charles Dickens' A Christ mas Present, and Christ mas Carol. I wasexpecting mas yet-to-come. The to find that the familiar story would produce in me a nice, warm glow that would carry me over the season of Christmas trees and holly, over-rich mince pies and turkeys and plum puddings and marzipanned porter-cakes, with a com fortable sense of general well-being and tolerance. In fact it produced no such purpose of the visits is to thing. Instead, though it show old Scrooge what he perhaps leaves me open to has become, the effect his ridicule, the old story move unpleasant self has on those around him -- in me to tears. This surprised me as particular, his poor but much as the announce honest clerk, Bob Cratchit, ment of it will probably and, finally, what will surprise readers. It sur happen to Scrooge if he prised me because, like continues as he is? We all very many people who know what happens -- know Dickens at all, I Scrooge repents, and thought I was immune to afterwards "it was always the large dollops of senti said of him, that he knew mentality that run through how to keep Christmas Dickens' novels. But well, if any man alive apparently I am not. And possessed the knowledge." what's more, I'm now While I was reading it, very glad I'm not. something the poet Cole A Christmas Carol ridge once wrote popped works on a very basic into my head. He said that level. Scrooge, the repre some Truths are so often sentative of all gloomy. considered as so true, that they actually lose all the power of truth, and turn into mere common-place adages or proverbs. And as we all know, nothing can be as dull as a proverb. But he went on to say that one sure way of giving back freshness to a wornout truth is to reflect on it. reflecting on times gone by. Sometimes people find painful memories are associated with this time of year -- a death in the family, an unhappy re lationship, job worries. But it would be rather extraordinary if even those with painful recol lections did not also preserve memories of happy times, that are often mysteriously evoked by the activities and cele brations of the Christmas season. What's this all got to do with Dickens? If you read A Christmas Carol it will become obvious. For Dickens, memory has a healing effect on the MEMORY HAS A human soul. Scrooge is HEALING EFFECT conducted by the Spirit of Christmas is often de Christmas Post tothecold scribed as being a time for and unfriendly boarding

who've been with us since the world as young, one of those simple truths that are so true that they must be continually re-stated lest we fall into the ranks of the world-bemoaners and lose all hope: '' There are many things from which I might have derived good, by which I have not profited, I dare say," returned the nephew: "Christmas among the rest. But I am sure I have always thought of Christ

WILL D O ME G O O D
Let the last word go to Scrooge's nephew, who expresses elogucntly, and in the teeth of all the gloomy old cynics -- you will surely encounter examples of the type over the next few weeks --