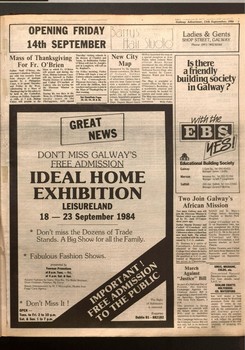 OPENING FRIDAY 14th SEPTEMBER
Mass of Thanksgiving For Fr. O'Brien
Father Niall O'Brien, the returned Columban Mission ary who was recently freed from charges of multiple murder by a Philippines Court, is to spend Thursday and Friday in the West, culminating in a Mass of Thanksgiving for his safety to be held in the Cathedral, Galway on Friday, Septemb er 14th, at 7 p.m. Bishop Casey will preside at the Mass at which Fr. O'Brien will preach and during the Mass, Bishop Eamonn Casey will say farewell to Father Martin Downey of Ardrahan and Cathal O'Conchuir of Galway who are leaving for the Diocesan Mission to Malawi. During his two days in the West, Fr. O'Brien, who spent twenty years in the Philippines, will spend Thursday visiting schools in the diocese of Clonfert and Tuam. In Ballinasloe Father O'Brien will visit St. Joseph's and in Loughrea, will call on St. Raphael's. On Friday morning, Father O'Brien will begin a tour of Galway schools conducted by Fr. Pat Connaughton, Diocesan Secretary, when he will invite the children, their teachers and parents to join in the Mass of Thanksgiving on that evening. See Classifieds Pages 22, 23, 24, 25 & 26.

New City Map
Sponsored by the Quincentennial committee, the Bank of I r e l a n d , G a l w a y Corporation and a number of advertisers Galway has a new city map. Easier to read with a wonderful index of places and streets, a synopsis of places to visit, churches, colleges, historic buildings, parks, etc. all outlined in colour, beautifully prepared by the Ordnance Survey Dept. Deputy Mayor Gerry

Molloy launched the map at a special reception at Aras Failte, when Ireland West official Brian N o l a n introduced the city officials present and those from the Ordnance Survey Dept. who were headed by Comm. Maurice Walsh and Kevin Toolan. The Map is available at tourist offices for 50p or at O'Gorman's Bookshop, its a worthwhile creation and will certainly be lauded by tourists and locals alike -- The Map was commissioned by the Quincentennial committee Willy Fahy.

Is there a friendly building society in Galway ?

Two Join Galway's African Mission
Two more Galway men will join the Diocesan Mission in Malawi which was establish ed by Fr. Jack O'Connor three years ago. Salthill and St. Mary's College before becoming Chaplain in Merlin Park Hospital. Cathal O'Conchuir will be Father Martin Downey and 21 on September 14th, has Cathal O'Conchuir will just completed his H.Dip continue missionary work at and was educated at the Bish Chikwawa where a school has and U.C.G. He is the son of now been built. The school Garda Inspector Denis was furnished with the money O'Conchuir and Mrs. Bairbre Ui Conchuir, a well raised by U.C.G. students. known teacher at Scoil Fr. Downey is a native of Fhursa. Carrabane, Ardrahan, educated at Our Lady's Father Downey and Cathal College Gort where he had a will leave from Shannon for distinguished sports career. Nairoibi and then to He qualified at U.C.G. and Lilongwe on September trained at Maynooth and 19th. has served in Clarenbridge,

March Against "Justice" Bill
As part of a National Day of Protest, the G a l w a y Campaign Against the Criminal Justice Bill is organising a march and rally on Saturday, September 15th from Eyre Square, 3 p.m. The protest is being organised to coincide with the Senate debate on the Bill, and to mobilise opposition to its enactment. The Campaign believes that the Criminal Justice Bill will not only fail in its declared aim of combatting crime.

The Right of Admission is reserved.

but will make a bad situation worse by diverting attention from the real causes of cnme in our society. Saturday's march will be the culmination of the G a l w a y g r o u p ' s activities over the summer months, and it is hoped that it will reflect the growing public awareness of the vital necessity of stopping this Bill.