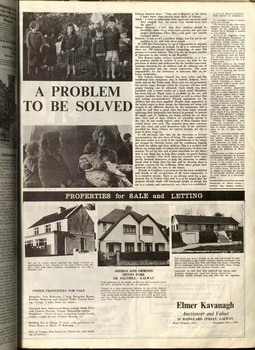 A PROBLEM TO BE SOLVED

Galway business man : "They are a disgrace to the town. I don't know what tourists must think of Galway. Adult: I tried to understand their particular situation until they camped near our house. You should have seen the mess ! School Mistress : I feel that their children should be forcefully taken away from their parents and put into proper institutions where they could grow into socially accepted adults . . . . Student: I can see it's a problem alright, but I'm not in any position to try and help these people . . . . In 1963 the Government set up a Commission to examine the itinerant situation in Ireland. In all it is estimated that there are 150 itinerant families comprising of some 850 persons in County Galway. This is by far the largest number of itinerants in any county in the Republic. This Report makes various recommendations as to how the problem should be tackled. It stresses the need for the provision of shelter and settlement for the families concerned, constant education for all children with the ultimate aim of their integration into the settled community. The main responsibility for the settlement of itinerants falls on the Local Authorities. The Galway County Council has been active and has established four temporary sites in Salthill, Rahoon, New castle and on the Tuam road. These sites are not permanent but merely stages through which the itinerant will pass until proper housing can be allocated. Each family has been provided with a motor trailer on a hard stand. Electricity has been laid on. Piped water is available on the site, and sanitary facilities have been provided as well as refuse bins and seating accommodation. Playing equipment for the children has also been supplied. Despite some opposition in the initial stages to these camps, the itinerants are being well treated in the different districts by the community and it could be said that a good start has been made towards achieving their integration into Society in general. At present 33 adults and 71 children are being catered for on these sites. Over half of these children are attending schools in the city. As one would expect, some of these families have settled down very well. The majority keep their caravans and sites clean and avail themselves fully of the amenities provided for them. Others, for various reasons, are not so good in these respects. It will obviously take time for the itinerants to become accustomed to this new form of living. The main complaints that have arisen as a result of the establishment of the camps are trespass by itinerant horses and the continuous begging by both the adults and their children. This is a problem and efforts are being made to reduce the annoyance of these two matters. To set up sites and to plan materially for the itiner ants is one thing but to help these people on purely human terms is another. Our local Itinerant Council have com pletely devoted themselves to help the itinerants to under stand what is being done for him and by showing there is genuine concern for his wellbeing. What these people have achieved will only be seen in the future. Already in Loughrea, a permanent site has been established and thanks to the co-operation of the local community, it is a complete success. There is an obvious need for a per manent site in Galway City and it is to be hoped that the progress already made will encourage people to accept this site in a realistic and constructive way when it is established.

CALL-UP REGULATIONS FOR IRISH IN AMERICA Is a foreigner living in America liable for call-up? The answer to this often-asked question depends, among other things, on his nationality and whether he is officially a resident or non-resident. If he is an Argentine, Costa Rican, Honduran, Paraguyan or a national of eleven other nations --Aurt.ia, China, Estonia, Ire land, Italy, Latvia, Liberia, Nor way, Spain, Switzerland and Yugoslnvi.-.--with which the United States has certain treaties, and if he is a non-resident, he is exempt from registration with the Selec tive Se:-vice System and from training and service in the U.S. a med forces. Resident aliens in the United States, however, are normally sub ject to selective service registra tion and to training and service in the armed forces. A resident alien is one who has indicated that he intends to live in the United States permanently without becoming a citizen; a non-resident alien is in the coun try for a limited period. Selective service regulations state that every male, 18 or older, born on or after September 15th, 1925, must register with a selec tive service board within six months after he enters the coun try. The rules also say he may be subject to military service "under applicable laws and regulations." Under present law, however, those over 26 are not subject to serve except if in a medical, den tal or "allied specialist" category. In such cases they may be subject to military duty until they are 35. Treaties of "friendship, com merce and navigation" make it possible for nationals of 15 coun tries to obtain exemptions from some, or all, of these require ments. Even a permanent resident may apply for exemption from mili tary service, although he must still register. After he has regis tered, however, or when he is called for military service, he may apply for exemption from duty through his Embassy in Wash ington. If, however, an alien is granted exemption in this way, he becomes permanently ineligible to become a U.S. citizen. He could, however, remain in the country as a per manent resident. He would lose that status if he subsequently left the United States. He would not be eligible to re-enter the country for permanent residence, although he could return as a non-immi grant.
Photograph courtesy for Trikon Shanley feature -- Studios."

PROPERTIES for SALE and

For sale by private treaty, detached two storey residence on approximately J acre. Situated on the main Galway road, one and a half miles from Carraroe, overlooking the bay with a beautiful view.

AHERLO AND ORMOND DEVON PARK LR. SALTHILL - GALWAY
I am instructed by the owner, to offer for sale by private treaty the above porperties in one lot, or separately. Situated in a most convenient location, in one of the choicest residential areas of the City. The houses contain in each: Three large bedrooms, bathroom and separate toilet, large dining-room, large sitting-room, kitchen and entrance hall, lovely gardens front and rear. There is place in attics for two further bedrooms, in each house. Garage, etc.

GARAGE. At split level with railed-off sun terrace over. Architect designed and supervised during construction. Freehold, outside borough area and with full rate remission.