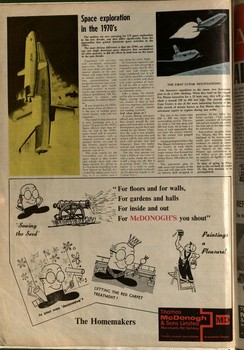 Experience will continue with automated, unmanned space-craft. Some of these will move deep into space to observe planets or the sun. Others will enter earth orbit to extend weather observa tion, communications and navigation services and. even tually, provide such "earth resources services" as watch ing for and reporting on agri cultural production, fish dis tribution in oceans, and indications of mineral depos its. If any target for the 1970's does tower above all others, it is the goal of making space travel simpler, safer and less expensive. The trend in that direction is now beginning and is a major US goal for the 1970's. Space officials hope that be fore the end of the 1970's, space travel will be possible for non-astronauts, such as research scientists; and that perhaps before the end of this century, almost anyone who wishes to go on such a journey can do so. The main reason for the tremendous cost of present space travel is that rocket and vehicle serve only one single mission. It's almost as if a bus driver travelling from Eyre Square to Salthill. dis carded his vehicle after every trip, or if an airline used a

new plane for every flight. So American engineers and scientists are now designing a re-usuable space shuttle. Sev eral sizes and shapes are being considered, but it will very likely resemble a combi nation of a rocket and plane with some qualities of each. It will be able to carry, sev eral passengers in addition to its astronaut crew. Like a plane, the shuttle will be able to complete many flights, cutting the cost of one mission to that of fuel and crew expenses, and main tenance of vehicle, launch and landing facilities. And what about us ? A senior Boeing aerospace official said recently that the first shuttle should fly into space and back after a shorter development period than was needed for the Saturn 5 boo ster. He said it was possible that within 15 years men and women will fly into orbit and back with greater ease and frequency than the highly trained and superbly condi tioned astronauts do today. The day that anyone can book a flight to the moon or take a jaunt round the earth is still a long way off. But it is getting closer. The fore runner of a craft to make such a trip possible is already on the drawing boards in the United States.

THE FIRST LUNAR MOUNTAINEERS On America's expedition to the moon, two Astronauts plan to do a little climbing. When they land on the nigged Fra Mauro formation for a 3 3 hour stay, they will possibly climb a mound 250 to 400 feet high. The mound, called Cone Crater, is one of the more interesting features of the hilly stretch of terrain known as Fra Mauro that the two astronauts expect to explore during two walks. The rim of the crater rises 250 to 400 feet above the surrounding terrain. T h e cra ter itself is 150 feet deep and 900 feet wide. At its base is a layer of rock apparently dug out from the moon's interior by the meteor that gouged out the crater. Lunar geologists believe the Fra Mauro formation is itself an overlay of rock debris thrown out by an earlier, larger meteor that formed the large area known as the Imbrium Basin, 500 miles to the north. The astronauts plan to take some core samples of the area and will take with them an electric drill designed to penetrate 10 feet belcw the lunar surface. This should permit recovery of valuable sub-surface samples on ^vhich the true age of the moc:i may be calculated. Sub-surface samples from Fra Mauro, the first lunar highland to be investigated, could give scientists better evidence on which to deter mine the age and evolution ary history of the moon. Present age calculations at 4.6 billion years are based on analysis of Apollo-11 and 12 samples.
At t i m e o f g o i n g t o Press,
m