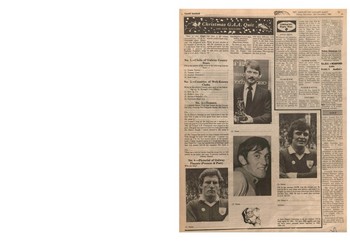 This is our Eight successive G.A.A. Christmas Quiz. Every year I'm delighted with the number of entries. As I wrote lasta week we are g i v i n g 3 p r i z e s of Padhraic Puirseal's book The G.A.A. in Its Time to

the first 3 all correct entries pulled from a hat.

Write in your answer to all the questions in the Or leave in your entry spaces provided. Cut out p e r s o n a l l y t o t h e this Quiz section and send Advertiser Office. Entries in one entry per person close on Friday, 31st to: December. Youngsters

who have difficulty with some of the questions are urged to ask their Dads for the answers, or some of the older members of their G.A.A. Club. It isn't too difficult. Just the odd little teaser. Have a go and the best of luck.

No. 3.--Teasers.
(1)1 played Minor, U-21 and Senior for my County this year, winning One Connacht Medal. My name is (Co ) (2) In Kerry's attempt to win 5-in-a-row I was the only One to play in every game from start to finish. My name is (3) I wasn't long on the field but yet I managed to score the goal in a Provincial Final that made sure the 1981 All Ireland S.H. Champions were pipped at the post. The goal was controversial but I was glad to take the chance though I nearly missed it. My name is (4) My County has never yet won a Senior Provincial Title though we went close this year. I suppose you could say I'm the best known player of the present team. I hadn' as good a game as I would have liked in that Final but I had the satisfaction of scoring a goal that will always live in my memory. My name is (Co ) These are a wee bit harder than the usual, but we will return to an easier one now. A picture confined to Galway Players.

FINAL TRIAL We extend our congratulations to Connachts second row Mick Moylett on being chosen for the Whites in the final Irish trial on Saturday. Mick who was a product of Connachts under 20 team two years ago has "being playing well for the Connachts Senior side this year and was capped for the Irish B side two weeks ago. We wish him and our other three players in the Trial Robbie McGrath, John O'Driscoll and Kieran Fitzgerald who captain's the Whites side the best of luck. CLUB SCENE Saturday Corinthians e n t e r t a i n N o r t h of Ireland visitors Collegians who are one of the better teams in the North and we should have a good open game of rugby with victory possibly going to Corinthians. Galwegians travel to Limerick to play Bohemians. Wegians who are not getting the

results this year will be Galwegians Bohemians (J.F.) hoping for a win to set Creggs V Corinthians (.IF.) them in up for the cup. Ballyhaunis Sligo (J.F.) on Shannon v Sunday U.C.G. make the Carrick Connemara v Ballina (J.F.) Tuam trip to Sligo for their (J.F.) Monivea v Galwegians Senior League game, (J.F.) Loughrea v Ballinasloe College who appear to be (J.L.) Thomond v O.L.B.C. League running into form should (J.F.) Finalv Junior B (J.B.F.) Ballinasloe Loughrea take the points from this B a l l i n r o b e v G a l w e g i a n s game. Ballinasloe are (J.B.F.) Longford v Creggs home to Athlone and this (J.B.F.) Tuam v Gort (J.B.F.) Westport Ballinrobe (J.B.F.) should be a game worth Saturday V 18th: Under 20 watching as both sides League Final. have very strong packs, but Athlone after holding Corinthians to a draw in Galway Bohemians F.G. Athlone will be looking Mass for deceased members, for full points from this Saturday night, December 18, game. at 7.30 p.m., in Augustinian JUNIOR SCENE There are seven Junior friendlies listed for Sunday. Galwegians are home to Limerick's Bohemians. Creggs are home to Corinthians. Tuam make the trip to Connemara for their game. Loughrea are home to Ballinasloe for their Junior League game.
Church. All members, past and present, welcome.

On Sunday last O.L.B.C. had a resounding win over Headford in the Jesuit Pitch at 12 o ' c l o c k . The conditions were fairly heavy and both teams arc to be congratulated for serving up some excellent football. The half time score was 1-1 JUNIOR B SCENE There are five Junior B with the club goal coming from Eddie Fallon, Club's fixtures listed for Sunday. superior fitness told in the Plus the Junior B final. second half and they added further goals from M. Kelly FIXTURES (2) one penalty and a Saturday I8ih: Corinthians v magnificently headed goal Collegians (S.F.) Bohemians v from Robert Healy. Galwegians (S.F.). Sunday Ntte: Parents Night Tonight 19lh: Sligo v U.C.G. (S.L.) Ballinasloe v Athlone (S.L.) (Thursday) at 8 o'ctock. Everybody welcome.

GOLF
Ladies: Sunday Dec. 5 9 holes stableford. Class A: C. Burke (13)21 pts.B: J. K a v a n a g h (20) 19. Tuesday Dec. 7: Class A K. Ward (12) 17. J. Carroll (17) 16. B: P. McDermott (22) 14. M. Swan (26) 14. C: E. Kenehan (33) 16. E. Holland (36) 16. Sunday next Dec. 19 14 holes blitz, hampers. Men: Saturday next T e a m s of 3 B l i t z hampers. There was an overflow attendance at the dinner in honour of the Lady Captain (Juliette McHugh) on Sunday last in the Clubhouse, a fitting tribute to the affection and esteem in which she is held and a tribute to the work done by her for the ladies. Connacht West senior alliance Hamper outing on Sunday next at Connemara Golf Club, sponsored by the Bank of Ireland. Presentation of hampers and prizes for (4) Name previous outings at 5 p.m. Fill in the answers NOW. Cut the section out. Be The annual general sure to fill in your name and address and send it on meeting of the mens tonight (or leave it in to your Advertiser) on or before section will be held on January 31st, 1982. Be sure to mark your envelope Tuesday Dec 28 at 8 p.m. G.A.A. QUIZ. in t h e c l u b h o u s e . Nominations for officerships and committee My Name is membership close on Dec. 20 at 12 noon. Good Address news on the accounts side lor year ended Oct. 31. proposed increase on membership fees amounts to roughly 15*?^. no change in levy. Presentation of hampA Very Happy Christmas to all jny readers. I'll be ers and other prizes on back again in 1983. 'Til then SiSn agaibh and xnay Wednesday Dec. 22 at 10 we have many pleasant hours together in 1983. p.m. Slui arts.

No. 4.--Pictorial of Galway Players (Present & Past)
Who are they?