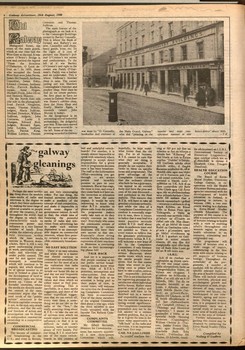 Commins and Thomas Sullivan. The main feature of the photograph as we look at it is the Connaught Buildings owned by Bartley Connolly. This is where the Bank of Ireland and Raftery's are now. Connollys sold china, fancy goods, wine, etc. To the right of it (out of picture) was Heavey's pub and O'Connor's tea rooms and confectioners. To the left of it was Bartley O'Connor's and right in the corner was Paddy O'Gor man's. Paddy was a barber and an undertaker. This is where Oolleran's butcher shop is now. The corner jutting out was Matthew Cunningham's butcher and poultry shop. Next door he had an ice cream parlour, the first place to have ice cream in Galway. Next door was Hoare's cobbler shop, then the News Shop and finally Martin Egan, a tinsmith (where John Murray is today). In the foreground is an interesting relic of industrial archaeology, the delightful post box. It has since moved off the corner several fer o the left. Some of the ear. printing recorded in Galway
r

was done by "G. Connolly, bookseller and stationer at

the Main Guard, Galway" who did "printing in the

neatest and most con spicuous manner at one

are not very encouraging either. For one thing, the limited airwaves available make a mockery of the concept of real competition, and make it impossible to avoid some degree of government control. As well as that, the whole idea of financing the powerful media of radio and tele vision from advertising has to make such stations dependent to an unaccept able degree on commercial interests, whose first prior ity certainly is not respon sible community broadcast ing. NO EASY SOLUTION There is no easy solution and while this is a matter that should continue to command our attention, the central fact for most of us is the realisation that radio and television continue to invade our home life day in and day out and frequently bring with them messages, values and ideas which we either reject or find posi tively revolting. This is inevitable, in a mass media suggestion, and short of the rather superficial sugges tion that we can switch off, every time there is some thing we do not like on the radio or the "box," the really annoying thing about R.T.E.--to take the one set of services over which we would expect to have some influence--is that it is so difficult to make one's COMMERCIAL opinions, tastes or counter BROADCASTING points of view known. For The lessons of commer- one thing, R.T.E. must have . cial broadcasting in the one of the worst switch 1 U.S., and even in Britain, boards in this country of

Perhaps the most terrifymg thing about the modern mass-media of radio and television is the degree to which they force uniformity by making the same range of material available to people all over the country, if not throughout the world. And the degree to which this characteristic tends to concentrate power and influence in a very limited number of hands. Even within the relatively plural istic structures within which the mass media operate in Western demo cracies, there is still a very great uniformising process at work, particularly where radio and television are under public control. The case for and against state monopoly is something which will continue to be argued, and which should be of special interest to us here in Ireland as plans for the development of local or community radio are being drawn up. Critics of the Socialist countries, where the media are directly under the control of the state, sometimes argue that the total result of the "public service" structures in the Western capitalist countries is not, in the end, very much different, and that the only real freedom of action and investigation can be found in independent commercial ownership in a competitive situation.

bad and unhelpful switch boards! For another, it is usually almost impossible to speak with somebody who is prepared to accept direct responsibility for a given item or programme decision once it has been broadcast. The staff in the Information Office--assuming you get through -- are always patient and invaribly promise to pass on your comments. But at that stage, the issue is over, and even if they come back to it later on, the correction or refutation does not have the same impact. It would be very interesting to know what value R.T.E. attaches to phone calls from the public. Do programme makers really take note or do they simply continue on their way?. Everybody who notes the continuous stream of programming in certain directions will have their own answer to that one. Especially those living outside Dublin who find the expression of their reactions to Montrose a continuing drain on their increasingly big phone bill! TALK BACK And yet it is important that people continue to let our public service broad casting system know what they think of R.T.E.'s priorities, assumptions and value-systems. And those who feel that little or no attention is being paid to their points of view, in recent times, will welcome the news that the Broadcast ing Complaints Committee has been re-constituted. Two of the three members of the original Committee died about a year ago, while the third member is now busily occupied with the Income Tax Reform Com mission. COMPLAINTS COMMITTEE Mr. Albert Reynolds, Minister for Communica tions, has recently appoint ed a new three-person Committee which will,

hopefully, be kept some what busier than the old one. For in all fairness, R.T.E. cannot be sure that what they are doing is generally acceptable, if people do not express their views to them on specific items and programmes. The great advantage of the Complaints Committee is that the ordinary citizen who feels he has a grievance, can appeal to an outside body and have the pros and cons of his case discussed-- and published in the final analysis. This ensures that R.T.E. will have to take all genuine criticisms seriously, and while the idea of a Complaints Committee proceedure is essentially nega tive in tone, there is reason to belive that it may lead to a more positive attitude within R.T.E. itself about what its audiences want and are entitled to. There is every reason to believe that the genuinely professional broadcasters within R.T.E. will welcome a new lease of life by the Complaints Committee, if only because it will, hopefully, stimulate serious discussion about media issues which worry the media people them selves. And for that reason those who resort to pur suing cases or points will have to take a sober, serious and responsible attitude too. This is not a mechanism for registering personal dis satisfaction about individual hobby-horses. Rather more general areas of policy and approach will have to be threshed out in a mature and responsible manner so that the outcome can have a lasting overall significance. The Complaints Committee proceedure may not be the full answer to a serious modern problem. But in so far as it gives the man in the street some opportunity to "talk back" to the radio and television, it is an important and basic first step. CAIL NA GAILLIMHE Ta cruthifreasunta fair-

far ollchruinniu an I.S.H.L. (International Society of Historical Linguistics), agus cuirfear cnoch leis an gCornhdhail le raiteas 6 Elizabeth Closs Traugott (Stanford). HEALTH EDUCATION COURSE The Board of ExtraMural Studies, University College Galway, in co operation with the Health Education Bureau and other agencies concerned with the development of health education in Ireland, is proposing to initiate, in autumn 1980, a two year course leading to a diploma in Extra-Mural Studies (Health Education). The purpose of this course is to offer a comprehensive series of lectures relating to health with a view to enabling adults throughout the western region to obtain health education in an intensive, stimulating and enlighteded way. The programme will consist of lectures over a wide range of topics, commencing in the first term with course relating to all aspects of human biology. Throughout the remainder of the pro gramme, a number of modules will be offered on specific relevant topics in the area of health education. These will include courses on nutrition, physical and psychological growth and development of man, drugs, diseases of man, exercise, recreation and leisure, the handicapped in our com munity, ageing and retire ment. During the course, also, it is proposed to have participants carry out a special study or survey on some area of health educa tion in the west of Ireland. Further information re garding this course may be obtained by contacting the Extra-Mural Studies Office U.C.G. Compiled by Nollaig O Gadhra