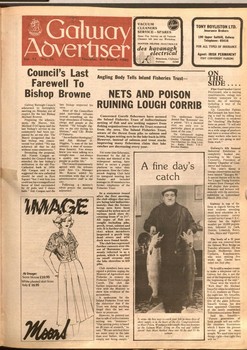 Council's Last Farewell To Bishop Browne
Galway Borough Council adjourned its fortnightly meeting on Monday out of respect for the late Bishop Michael Browne. Proposing the adjourn ment, the Mayor, Aid. Micheal O hUiginn said the late bishop's service to the community had been sur passed by no one else. The Mayor recognised that the late bishop was contro versial but added: " N o one achieved all that he did without some controversy." Seconding the proposal, Aid. Fintan Coogan re minded the Council that he attended the late bishop's ordination in the old ProCathedral back in 1939. Aid. Coogan said it was suggested the new cathedral should be sited in Eyre Square "but I told him you could not have a magnificent house of God surrounded by 22 pubs and 2 dance halls." Aid. Coogan said the late bishop respected his view. Most of the Councillors paid individual tributes; several remarking on the large attendance of bishops, clergy and people at the funeral. "He brought dig nity to the city during his lifetime," said Cllr. Bridie O'Flaherty. "An orthodox theologian^' said Aid. Michael D. Higgins, "a man of the last century, a man of tremen dous honesty. You always knew you were talking to a straight man . . . not always a quality one meets in people in public life." The Council unanimously agreed with the tributes paid. Asst. Co. Manager Mr. Reams added his association with that of all administrative staff in the city. Following a minute's silent prayer the meeting adjourned.

ON THE SIDE
Fine Gael leader Garret FitzGerald, who is touring constituencies, swings into Galway tomorrow for a hectic day of meetings, including a tour of the Gaeltacht. Co. Councillor Padraic McCormack has been beat ing a trail by telling local F.G. branches to condemn the "shocking" 20p Budget hoist on petrol. "It will add to inflation, cause price rises on a wide range of products and have a serious effect on many workers who have to use their cars going to and from work." Galway's 4th Annual Industrial Exhibition is completely booked out, according to Mr. Conor Connolly, President of Galway Chamber of Com merce and Industry. This year's theme is energy conservation and has been named "Energex 80." A special feature will be the Aer Lingus Young Scientist winners from Donegal who will display their projects. Seminars and lectures will coincide with the ambitious exhibition at Leisureland March 20th-23rd. Galway is top of the form as regards having the most students attending third level education in a county-by-county survey carried out by Cavan V.E.C. Galway has the highest number per 10,000 popula tion, followed by Cork, Dublin, Limerick, Kerry, Clare, Mayo and Tipperary. The body of a 31 year old man was removed from the Salmon Weir Bridge on Tuesday afternoon. He was Joseph Mulkerrins from Clybawn, Knocknacarra, who went missing five weeks ago. Gardai have ruled out foul play. "It is still a major event to make a telephone call in Galway but this is not the end of the beginning but it is the beginning of the end." Those were the words of "Rich Man" Mr. Michael Smurfitt when he addressed U.C.G. students on Thurs day night last. Mr. Smurfitt, Chairman and Chief Execu tive of the giant Jefferson Smurfit Group, has also been appointed Chairman of the newly established Telecommunications Board. Said Mr. Smurfit:-- "Future generations of Irish people will not suffer the countless frustrations which I know the present service gives to many people. We need time to put things right--but right they will be."

NETS AND POISON RUINING LOUGH CORRIB
C o n c e r n e d C o r r i b fishermen h a v e a c c u s e d the Inland Fisheries Trust of indiscriminate n e t t i n g o f fish a n d a r e s e e k i n g s u p p o r t f r o m f i s h i n g o r g a n i s a t i o n s to h a v e the T r u s t r e m o v e d from the area. The Inland Fisheries Trust, a w a r e o f the t h r e a t f r o m pike t o s a l m o n a n d t r o u t , b e g a n s e t t i n g nets in t h e lake back i n 1954. H o w e v e r , i n s t e a d o f s a l m o n and t r o u t stocks i m p r o v i n g m a n y f i s h e r m e n c l a i m t h a t lake catches are decreasing every year. For some time fishermen, frustrated by the fall in catches and alarmed at the widespread netting, have failed to secure a proper platform to voice their grievances. Now the Collin amuck Angling Club held its inaugural meeting last Sunday and included amongst its 20 members two former employees of the Fisheries Trust. In a s t a t e m e n t issued after t h e first meeting, the club alleges t h a t nets a r e being laid i n d i s c r i m inately; t h a t the f o r m e r h e m p nets have been replaced by nylon nets of various mesh sizes de creasing from A" to 2Vi". All types of fish a r e c a u g h t including pike, perch, trout, salmon and eels. It is f u r t h e r claimed that when members inspected a perch t r a p dead o t t e r s and wild duck were found inside. T h e club has expressed f u r t h e r concern over the use of 'Rotonone,' com monly referred to as a poison, which is applied on small s t r e a m s and the lake shoreline to kill pike. Club members have now signed a petition urging the Minister of Agriculture and Fisheries to remove the Fisheries Trust from Lough Corrib. The club has further requested an inter view with the Minister to show him evidence of the accusations. A spokesman for the Inland Fisheries Trust told the Advertiser that if the Trust was doing anything illegal then the law was there to prosecute. However, he pointed out that to talk of indiscriminate netting was "nonsense." "Our netting policy is based on 28 years of research," he said. "We are satisfied there are more trout in the lake than ever before, they are simply not being caught." The spokesman further denied that 'Rotonone' was a poison. "It's a chemical that we only use in particular places at certain times of the year."
The Collinamuck Angling Club meets in O'Halloran's every Sunday. Chairman Pat Dolan; Vice-Chairman Dr. Greg Little; Sec. Kathy Keely; P R O . Brendan Madden.

It items the best way to catch your fish in these days of short supply is in the heart of the city. Congratulations toMurt Folan, VCoodquay who caught these two beauties at the Salmon Weir. Using an Abu rod and 'yellow devon' bait Murt hoohed these two 18 lbs and 15 lbs salmon.