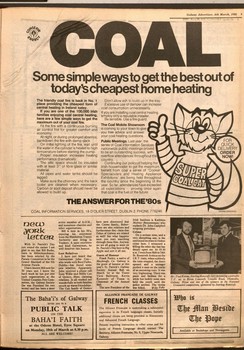 S o m e simple ways to get the best out of today's cheapest h o m e heating
The friendly coal fire is back in No. 1 Don't allow ash to build up in the tray. place providing the cheapest form of Excessive use of damper can increase central heating in Ireland today. coal consumption unnecessarily. If you are one of the 100,000 Irish If you are installing coal central heating families enjoying coal central heating, employ only a reputable installer. here are a few simple ways to get the Be sensible. Use a fire guard. maximum out of your coal fire. Fit the fire with a continuous burning The Coal Mobile Showroom air control fret for greater comfort and is coming to your town to give you free advice and answer economy. At night, or during prolonged absence, your coal heating questions. bankdown the fire with damp slack. Public Meetings. Last year, the On initial lighting of the fire, wait until series of Coal Information Services the water in the cylinder is heated to high nationwide public meetings proved temperature before starting the pump. to be an outstanding success, with Proper insulation increases heating overflow attendances throughout the' performance dramatically. country, i The attic space should be insulated Continufng our policy ,of helping the with at least 3 " of fibre glass or similar Irish householder to get the maximum material. benefit from coal a series of "Cooker All pipes and water tanks should be Spectaculars and Heating Appliance lagged. Exhibitions" are being held throughout Make sure the chimney and the back the country since the beginning of the boiler are cleaned when necessary. year. So far, attendances have exceeded Carbon or soot deposit should never be all expectations - proving once again that coal is the fuel of the future. allowed to build up.

THE ANSWER FOR THE'80s
COAL INFORMATION SERVICES, 18 D'OLIER STREET, DUBLIN 2. PHONE 776246
active member of A.O.H., and numerous charities and other organisations. Bill is now in his 70's, enjoying his retirement from the Manhattan Transit Authority and living in Yonkers. A most courteous and kind Galwayman, he well deserves this honour. Lost Relatives I have just heard that Galwayman John Cox-- who works with Bord Failte, Dublin--has found some new relatives. Apparently John received a phone call from Willie and Millie Cox of Quincy, Mass. claiming relations. It all worked out wonderfully as both families struck up warm friendships. The Cox family of Quincv have now discovered that the Crowe family, Bohermore are also relations and furthermore they claim that Fahys of Galway are related as well! See what happens once you start searching through those files. Anyway we are all going to meet on St. Patrick's Day here in Big Apple and sort it all out. Guest of Honour Frank Feeley, a native of Moylough, Co. Galway is the guest of honour at this year's St. Patrick's Galway Society Annual Ball on March 1st at the Tower View Ballroom. Kevin Kennedy of T u a m is Chairman of the Annual Ball. The new President of the Irish Institute is Kathleen Mulvey (Roscommon) who replaces Dr. John Campbell outgoing president. Crime On a serious note, and a very disturbing one, is the continued increase in violent crime here. I witnessed a killing the other day that has deeply upset me. At 10.30 a.m. I went from 90th to 74th St. Roosevelt Avenue on the I.R.T. train, when suddenly the train stopped, the doors opened and a teenager pushed a man on the tracks of an oncoming train. It was very frightening. There was panic and bedlam for a while but luckily some men held the youth until the police arrived. The victim
was killed. Willy Poky

Letter*
With St. Patrick's Day just round the corner I am glad to say that Bill Burke, born in Abbeyknockmoy, has been selected by the Parade Committee to be the Grand Marshall of the 5th Avenue Parade. I have known Bill now for 30 years and I know the hard work he has put into such organisations as the United Counties Feis Com mittee, the Galway Society (he was President for two terms) and has been a most

FRENCH CLASSES
The Alliance Francaise is undertaking a substantial expansion in its French languages classes. Initially additional classes are being provided in Elementary and Advanced French Language. Persons requiring instruction in other areas and for levels of French Language should contact The Secetary, Alliance Francaise, No. 6, Upper Newcastle, Galway.