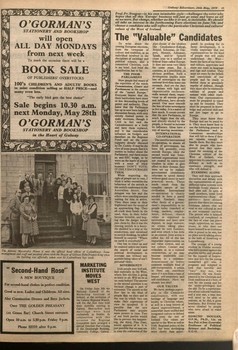 O'GORMAN'S
values of the West of STATIONERY AND BOOKSHOP

100'S CHILDREN'S AND ADULTS' BOOKS in mint condition selling at HALF PRICE--and many even less.
"The early bird gets the best choice"

Sale begins 10.30 a.m. next Monday, May 28th
STATIONERY in AND of BOOKSHOP Galway

The historic Mayoralty House is now the official head offices of LydonHouse. Some management and staff and pictured above with the Mayor of Galway John Francis King when the building was officially taken over by LydonHouse last week.

MARKETING INSTITUTE MOVES WEST
On Friday June 8th the National Council of the Marketing Institute of Ireland, at the invitation of the Galway Regional Branch, will for the first time hold their monthly meeting in Galway. Here-to-fore such meetings were held exclusively in Dublin. In conjunction with this occasion the Regional Committee have arranged a special function that evening in the Quadrangle Building, University College, Galway.