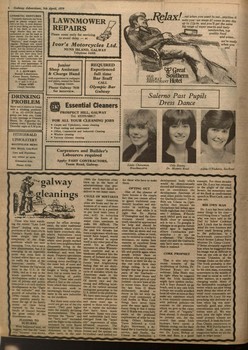 COSMETIC DENTURES Cosmetic dentures can be as good as plastic surgery and cost a lot less. Is your denture not to your liking, are the teeth on it too short or even too long? Maybe they are very prominent or too far back in your mouth. D o the teeth in your denture look very "denrury," dead straight and regular. Perhaps you would like a gold filling in an artificial tooth. Are the corners of your mouth turned down or falling in? Do you have deep lines running down each side of your mouth? Corrections like these in dentures can take years off your appearance. If you have a problem with your denture contact F. I. HOWARD, Dental Laboratory, Cross Street, Galway. Monday-Friday" 9--1 and 2--6 p.m. Phone 64385 Closed Saturday.

to eat..anytime it! come in any

and you 11 get the
snacks quality and sandwiches, food and

DRINKING PROBLEM
Have you a relative or friend with a drinking problem? If so, AL-ANON family group can help you. Come to our meetings at Ozanam House, St. Augustine St., Galway every Tuesday and Thursday night at 8.30 p.m.

1960s the American cities blew u p in t h e faces of administrations that pro mised much but failed to deliver in too many cases. CYCLE O F MISTAKES Now many American cities are broke and the re location of so many of those who would be in a position to pay local taxes (rates if you will) in s u b u r b i a outside the limits of the major cities continues to make life difficult. T h e American city experience of the past few decades has been a nightmare which one would have hoped, would not be allowed to repeat itself in any other part of the world. Yet as affluence increases in other Westernstyle countries and as a moderate affluence hits the shores of Ireland and cities like Dublin, we get the funny a n d frightening feeling that we are deter mined to repeat the whole cycle of mistakes which the Americans made in the 1950s and the early 1960s. Of course race and the strong and differing loyal ties of the various national immigrant groupings in the U.S. added to the problems. We have seen enough of the mistakes in other places ten and more years ago to appeal to those with power not to repeat the mistakes t h a t have been m a d e elsewhere. Some very clear and undeniable facts have emerged from the "inner city" experiences of other advanced countries. T h e literature is available, the lessons and the options can be studied--and spelled out

for those who have to make them. OPTING O U T One of the clearest of these lessons is the simple fact that you cannot afford to ignore traditional com munity loyalties and atti t u d e s in tackling t h e problems. And while it is right that Dr. Martin O'Donoghue and the Gov ernment should interest itself, should be approached for help and should be anxious to give it, it is fairly clear that no down and out community, urban or rural, can be restored to vitality by assistance, no matter how massive or excellent from outside. Declining com munities only really come to life and growth again when people within them or outsiders who are prepared to throw in their lot day in day out with them start things rolling. It is this insight that has given some parts of the Gaeltacht-- once the rural slums and down-trodden parts of rural Ireland--its new lease of life in recent times. Ever since the late Sean O Riada deliberately decided to throw in his lot with the small rural community of Cuil Aodha in West Cork things have never been quite the same again. T h e funny thing is that it seems that O Riada was even fully aware of the profound implications of what he was doing. Others followed. There followed a Civil Rights Movement, a de mand for a Gaeltacht radio service, and finally, for Udaras na Gaeltachta a

Those who were watch except for office develop ing the recent "Late Late ment, the older traditional Show" dealing with the communities where every problems of the inner city in body knew everybody else, Dublin's North Side got where businesses were some insight into the largely family owned and complexity of the huge where most people worked problems which are now in their own neighbourhood emerging. True, this is not a (frequently living in the new phenomenon, but it is apartment above the shop or emerging in an especially workshop) and went into acute way even here in decay. Property speculation Ireland where there are still had a vested interest in no really big cities of the running down dwellings in American .variety. " T h e the inner belt of town and cities" became the big social city housing programmes issue in the U.S. in the fought a losing battle in 1960s, tied as it was to the their bid to retain land for whole question of urban the building of public development under a mix housing. Those who could ture of private and public afford it fled to the suburbs enterprise aud such modem from which they commuted developments as the "flight to down-town work or to the suburbs" and the increasingly found employ growth of suburbia in the ment in the new industries 1950s--trends which be on the outskirts. came possible mainly be cause the age of the family But there were some who motor car (now being could not get out of the city replaced by the two-car centre. They paid higher family of course) became rents for steadily declining the great reality of the accommodation. The gap Eisenhower era. between the "haves" and the "have nots" increaded FLEEING T O and the flight to the suburbs SUBURBS increased the cycle. Racial What happened next, we suspicion added an extra suggest, was that the "inner dimension to the whole c i t y " b e c a m e r u n - d o w n , affair until, in the mid-

development body which would be democratically elected and would incorpor ate or c o o r d i n a t e t h e development functions of most other public bodies in the Gaeltacht context. Ta an Bille u m Udaras na Gael t a c h t a faoi b h r a i d an Oireachtais faoi lathair agus beidh toghchan don Udaras ann i mbliana. B'fheidir nach bhfuil gach aon ni sa Bhille chun ar sastachta, ach is tus e. Ta geargha le atheagar ar an gcoras rialtais aitiuil agus le haghaidh dilaru c u m h a c h t a p o l aitiochta i re seo na n-ollaonad. T h e Dublin inner city and the Gaeltacht may have more in common than is realised. CORK P R O P H E T That is also why the recent remarks of the Archbishop of Dublin, D r . D e r m o t R y a n , a r e so welcome. John Healy may be right when he suggests that the Irish hierarchy might have spoken earlier. Ach is fearr deanach no go brach, and in any case Irish bishops are usually attacked from all sides as soon as they make any statement which is even remotely connected with political policies--in contrast to the attention which we give to the views of - all sorts of "experts" from abroad. It should also be pointed out, for the record, that some Irish bishops have spent a lifetime crying out for their declining rural communi ties. Dr. Lucy, Bishop of Cork and Ross is a good

example. For three decades now Dr. Lucy has returned to t h e . plight of the small farmer, the mountainy men of his flock at confirmation speech in West Cork, year in year out. HIS OWN MAN Dr. Lucy has been called many things in his time-- everything from a "radical" who was once told in the Dail by fellow Corkman Jack Lynch that he should mind his own business and leave small farming policy to the politicians, to a backwoods conservative which former Labour Party Minister Dr. Conor CruiseO'Brien obviously regarded him when he suggested that his image was as difficult to bear on one side as that of certain Unionists of the Orange Order on the other. The truth probably is that Dr. Lucy has continued to be his own man, remaining somewhere in the middle of the road in social as well as other matters, in a rapidly changing world. Many of the fashionable sociological noises which are now being made about the value of the small rural community are old hat to Dr. Lucy. He was preaching this doctrine at a time when big was auto matically good and when centralisation and rational isation were all. We may have seen the light where small primary schools are concerned. It took the bitter Dun Chaoin controversy to do that. Will Dublin have to choke itself in its own congestion before we see the light in other areas?