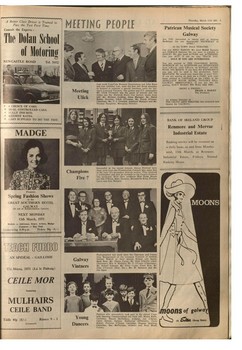 Patrican Musical Society Galway
Are YOU interested in taking part or helping Backstage for our Spectacular SHOWBOAT in APRIL? At the TOWN HALL THEATRE. Can you SING? DANCE? We need MALE Dancers and FEMALE Dancers. Do you want to LEARN to DANCE? We also need ACTORS and ACTRESSES. Can you ACT? If not we may TEACH YOU. ONLY I F YOU ARE INTERESTED. You are invited to THE COACHMAN HOTEL, DOMIN1CK JST. for AUDITIONS and INTERVIEWS from 2.30 p.m. until 5.30 p.m. on SUNDAY AFTER NOON 14th MARCH. If you have NO EXPERIENCE you may still be used in this production. Don't HESITATE! We would very much like to meet YOU. If you are coming do drop me a CARD, with your name printed in CAPITALS on the CARD, to the ARDILLAUN HOUSE HOTEL, TAYLOR'S HILL, GALWAY, IMMEDIATELY. If you are late for posting, DON'T WORRY WE WILL SEE YOU. BRING A FRIEND ! FRANK J. BAILEY The Producer An Artistic Director of THE CELTIC ARTS THEATRE (the proposed new theatre for GALWAY).

Successful at the recent Schools Drama Festival were these girls from the Presentation Convent who came first in the over 15's Secondary Schools section. They received a nomination and now go forward to the County Festival this week-end. With their producer Miss Tessa Brown are Sile O'Broin, Mary Devaney, Bernadette King, Pauline Carey and Ann Mangan.

Spring Fashion Shows
at the