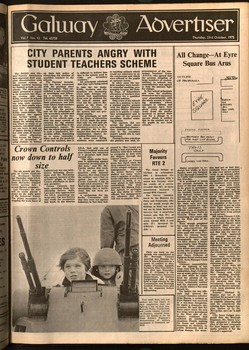 Galiuay H i Advertiser
CITY PARENTS ANGRY WITH STUDENT TEACHERS SCHEME
up their bad policy of restricting the number of qualified teachers in the schools. The Parents' Associa tion has been concerned with the problem since last November. They est ablished a sub-committee to investigate and follow ing a meeting with the Education Department at. U.C.G. they were told that their grieveance was-with local school head-teachers rather than with them. Last May the parents met all the principals of city secondary schools and were struck by the fact that no two schools oper ated the same system of catering for the student teachers. According to the Association's report! "In fact the whole programme is such a haphazard, hitor-miss affair, depending on so many imponder ables such as the goodwill of the lay teachers, that it is difficult to believe that this is the system used to train our secondary teachers." All principals admitted ' that they were being asked to take far too many H.Dip. students and the numbers are increasing every year. Already two schools had applications from over 90 students for the 1975-76 season and even one for 1976-77. Re quests to the Dept. of Education, U.C.G., for some rationalisation of the system had not pro duced results. The principals, as well as the Dept. of Education at U . C G . made the point that only 1st, 2nd and 4th year classes were given to untrained teach:TM, a) far as possible, bit it does happen that they are given examination classes in cluding Honours level. In some cases H.Dip. students were employed in teaching subjects which would not otherwise be on the curriculum and which were offered to the pupils as optional extras. In other cases the stu dent teachers were Involvin remedial teaching, pre sumably because the Dub lin Dept. of Education's allocation of teachers does not allow for a qualified remedial teacher. Only a few of the schools were in a position to have a trained teacher present with the Higher Diploma students. Where this hap pens it is purely a volun tary arrangement and is not part of the present secondary teacher train ing system. The parents did not accept the point about non-examination classes-- they insisted that every year in the secondary pupil's school life is very important. During further meetings the parents met with re comed it. "But Crown are giving a bad reputation to industry with their refusal to recognise or deal with the dispute through the Labour Court." The dispute at Crown arose last April when the shop steward was dismiss ed for alleged rudeness to management. Although the entire factory staffl walked out some weeks later a number of strikers broke with their union and returned to work. A 24hour picket is still being maintained. The shop steward, Mr. Martin Daly, has agreed to apologise and step down as union official, but management are adamant that they will not re-employ him. presentatives of the Sec ondary Teachers' Union (A.S.T.I.) who agreed that the present situation of large numbers of student teachers in schools was unsatisfactory and agreed to help the parents fight for change. In fact school principals and even the students themselves have expressed total dissatisfaction with the whole system of train ing secondary school teachers in Galway and the parents have been given every encourage ment from the parties involved to persue their case for a change in a system which Is neither fair to the student nor to the pupils in our local schools.

The Salthil and Dis trict Parents' Association have expressed their com plete dissatisfaction with the present system of trainee teachers teaching for limited ptrlods in city schools. The Association, which presented a report to its members last Mon day evening said that H.Dip. students in schools cannot be expected to have any long term commit ment to their pupils when their main responsibility must be to past their H.Dip. exam nation. The Association ha* agreed that further" action on their part is accessary to change the existing situa tion where as many as 37 students, untriined teach ers, can movt in and out of classes during a child's five vital years of second ary school education. They accuse the Depart ment of Education of using students to bolster

Unilock Ltd. but was with drawn following discus sions with Mr. McCarthy who agreed, because of the strikers' plight, to refuse Crown admission to their new premises. Crown Controls had been operating from two adjoining factory units. Last June they approached the I.D.A. requesting one large unit. The new factory was ready for occupation last week. In the interim

LD.A. had sold one of Crown's original units and now Crown are restricted to a premises half their normal size. "The whole strike busi ness is militating against industrial development in this area," said Mr. M c Carthy earlier this week. "It is not my place to interfere with internal .disputes. But when I heard the strikers' case I had no option but to restrict (Crown Controls. I am in a cleft-stick situation." M r McCarthy said that it was astonishing that a settle ment has not been yet reached. A spokesman for the Strike Committee said that they were not against industry; in fact they wel

Majority Favours RTE2
The Great Debate on whether to rebroadcast BBC 1 throughout t h e island or establish RTE 2 ended last Tuesday when the results of a survey revealed that 62% of those interviewed favoured a second RTE Channel. The Survey commiss ioned by t h e Minister for Posts and Telegraphs, who said h e would accept the findings as final, was carr ied out by Irish Marketing Surveys Ltd. A surprising feature was that 59% of viewers in single channel areas wanted RTE 2 and only 37% favoured Dr. O'Brien's proposal for

Meeting Adjourned
Only one item on the agenda was considered at the Borough Council meeting last Monday be fore it was adjourned as a mark of respect to Mrs. Paddy O'Grady, Salthill, formerly Miss Una Dillon, who died last Thursday Mr. P. O'Grady is the Senior executive, Accounts Department, at Galway Corporation and a man held in high esteem by the Corporation and Borough Council. Prayers were said for the departed before adjourning.

Two small boys, not real soldiers yet, but clearly in their imagination they are fighting a war on their own. Kenneth Burke, Corrib Park, and Joseph Ganley, Carrickon-Shannon, enjoyed them selves last Sunday at the 5th Field Artillery Regiment's demonstration of military equipment at Oranmore air field.

Major proposals to re design bus traffic at Eyre Square were put forward to the Borough Council by its Traffic Sub-Committee last Monday. It is proposed to recess the present footpath in front of the taxi rank and in its place to accommo date all bus traffic except the Salthill, Taylor's Hill and Rahoon routes. T h e present car park, behind the existing taxi rank, to become an exclusive area for taxis only and bus shelters erected for wait ing bus passengers. The Salthill route re-position ed opposite Arus Failte at Victoria Place and ,the remaining two routes still on the West side of the Square. Even though prepared for some time the Coun cil's sub-committee did not divulge their sugges tions until this week. Per haps for reasons better known to themselves, but strategically they could not have chosen a better opportunity than Monday evening. After consider able delays and post ponements also present at the meeting were Superinten dent Gerry Colleran of Eglinton Street station and C L E . Area Manager Liam Tierney. Ultimate responsibility for the sighting of bus stops rests with the Garda authorities, Supt. Colleran was at some pains to point out that while he might heed the opinion of the Borough Council and of C L E . technically neither had the statutory powers to decide where a bus stop should be. Yet before the two offi cials had entered the Council Chamber solicitor Sean Horan, a resident at Eyre Square was received as a one-man delegation. He made a dramatic i m pression. He said that for three years (since the new bus stops were introduced to the West side of the Square) residents had endured an intolerable situation. People waiting for buses use residents' doorways as shelters, as public lavatories and as refuse dumps. The situa

tion had got so bad that . residents were prompted to take very severe action "even to go beyond what most citizens would con sider right." He bitterly complained that somehow the residents were never able to meet with C L E . and the Corporation together and said that the situation was forcing them out of their homes. The strain was making resi dents "nervous wrecks" and he surmised that if any member of the Coun cil had had to put up with what Eyre Square resi dents suffered he was sure it would have been solved much sooner. MT Liam Tierney C L E . said that when in 1971 the new bus stops on the West side of Eyre Square were proposed there was no objection. They were pre sented at a public meeting and that was the time to object. C L E . approved the scheme because it felt that it would suit the users of their service, and that la C L E . ' s main con sideration, and that it suited the one-way traffic system. It was only after the scheme was introduced that residents objected. There were various in dependent ideas to change the plan and he had no objection to change. Indeed C L E . were all the time changing. Due to the expansion of the city, Mr. Tierney said, C L E . were watching develop ments almost daily. In the last four years four new city services had been introduced because of growth in the city suburbs. C L E . were planning five years ahead. Senator Michael D. Higgins was not at all satisfied. He accused C L E . of living in the last century as regards planning and said he considered the existing Eyre Square bus plan (drawn up by Dr. McCarthy, 1971) as "a daft plan." CUr. Jerry Colgan pro posed that the Borough Engineer, Mr. Gerry Leyden, prepares a detailed plan of the new proposals for Eyre Square and for mally submits it for the Councils approval.