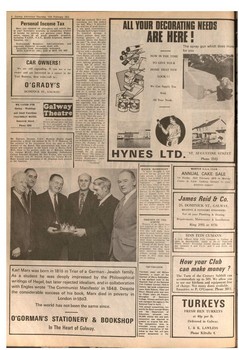 Personal Income Tax
Have you claimed all allowances and reliefs due to you? Assistance available in completing returns of income for current and previous years. Repay ments claims of all kinds promptly prepared, including P.A.Y.E., V.A.T., Health Expenses, Double Taxation, etc. Professional, Retailers', Sub-Contractors, and especially Farmers' Arcounts dealt with. Enquiries from Accountants welcomed. RING GALWAY (091) 4538 or BOX NO. 96P.

CAR O W N E R S !
We are still expanding. If you are a car owner and are interested in a career in the Taxi Business, then write/call to :

O'GRADY'S
DOMINICK ST., GALWAY.
WE CATER FOR Parties - Weddings and Small Functions COACHMAN HOTEL Dominick Street Phone 5222 U.C.G. Players have brok en new ground again this year as they presented the Irish premiere of "Elizabeth One" by Paul Foster in the Jesuit

Mr. Eamonn Hannon, C.E.O. Western Health Board, presenting a silver tea service to Dr. P. P. Donovan, on the occasion of his retirement from the post of Chief Analyst of the Board. The presentation was made at a dinner and reception in the board room at Merlin Park. With them in the picture (left) Dr. C. McConn, former Co. Galway M u l l . Prof. John Kennedy, Pathologist, Galway Regional Hospital, Dr. Des. Feeley, who succeeds Dr. Donovan, and Dr. Patrick Power, Co. Galway M.O.H. Many friends and associates of Dr. Donovan were present at the function.

Hall last weekend. Here was something new that packed the hall. Why? It provided the acid test of good theatre; it was good entertainment. The play itself is light-bodied. Its historical message is flimsy; perhaps there were fleeting glimpses of "the awesome Queen that fleshed the part." In short, the play has very little substance for the paradoxical reason that the author attempted to un fold too wide a spectrum. Yet this play, produced by Garry Hyncs, was truly spec tacular. It had a distinctive architectonic quality--move ment, lighting, grouping, the timing and of course the silences, had a marvellous fluidity. The magical quality of the music specially com posed by Tom Cullivan was particularly evocative of the mood of the play. It was all beautifully balanced. The high moments of suspense so well controlled left one won dering at such professional direction. Did this in fact lead to a certain lack of spontaneity on the part of the actors? The acting while stylized was consistently good; this was especially true of the ladies' parts. The skilful un obtrusive transfer from char acter to character was an achievement. As the witch in the opening lines of the play asks us to "shed the coats of centuries" and as she whirls us into the world of makcbclicve wc sec something of the play within the play: the possibilities of modern drama on a bare stage. The Player Queen in the epilogue asks "could there ever be such a place to show you, or could there ever have been such a one as Elizabeth the Queen ?" hence the dilemma of the play! To bring it off success fully was a feat for the U.C.G. Players and a personal triumph for the producer Garry Hyncs. The queue on Sunday night spoke for itself; Galway theatre-goers await another performance. "Sccolang"

We Can Supply You With All Your Needs.

HYIMES L T D .
KNOCK M A R R I A G E S "I never thought it was possible for me to wed the right person. I just cannot cxprc ;s how grateful I am to you for bringing us so much happiness" . . . part of one of the many letters of thanks to Rev. Michael Keane, Dir ector of the Knock Marriage Bureau. In the Bureau's 7th Ann' a) Report 7,766 men am' women have made en quiries through the bureau resulting in 127 marriages and 13 engagements. During the last twelve months 9.13 enquiries were received and there have been 27 marriages.

For all your Plumbing & Heating
FRIENDS OF T H E EARTH Friends of the Earth have just acquired an office at I I Dominick Street. They hope that this will make them easier to reach both for those who wish to become mem bers and for those who simply want more information on environmental problems. Friends of the Earth have a lot of activities on their programme but they need more members badly for without enough concerned people in their ranks they can do nothing.

SINN FEIN CUMANN
A new Official Sinn Fein Cumann in open to membership. Apply at 35--37 Street. Hours: Everyday except Sunday day between 4 and 6 p.m. and 2 and Saturday. Galway is Dominick and Mon 4 p.m. on.

Karl Marx was born in 1818 in Trier of a German-Jewish family. As a student he was deeply impressed by the Philosophical writings of Hegel, but later rejected idealism, and in collaboration with Engles wrote 'The Communist Manifesto' in 1848. Despite the considerable success of his book, Marx died in poverty in London in1883. The world has not been the same since.

STATIONERY &
In The Heart of Galway.

Fourteen years old Miriam Cummins, a pupil of the Convent of Mercy Ballinasloe. is top sea-food cook in the Regional final of the National Fish Cookery Contest. Held in Galway last week competitors came from Galway, Clare and Mayo. Second prize was won by fifteen years old Eleanor Monaghan of Seamount College, Kinvara and both girls will represent the region in the National Final in April. This annual competition, run jointly by Bord lascaigh Mhara and the Department of Education, attracted over 25,000 entries this and each competitor was required to present an original fish dish. The competition aims to stimulate young people in attractive presentation of fish dishes so that fish will gain greater acceptance in the home.

How your Club can make money ?
The Turn of the Century Salthill can accommodate up to 500. We allow you to use our kitchens and equipment free of charge. Not many dates available. Enquiries to P. O'Connor. Phone 3811.