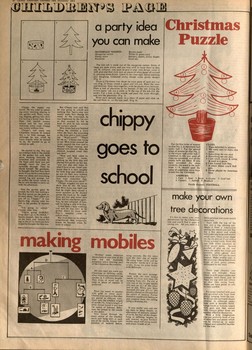 a party idea Christmas you can make Puzzle
MATERIALS NEEDED: Margarine carton Plastic straw Plasticine Brown paper White or green card Scissors, paints, sticky shapes tinsel etc. The tree tub is made out of the margarine carton. Some of these are quite pretty and you may wish to leave them as they are. If, however, you want to give it your own design, cover it with glue and then stick torn up pieces of white paper all around it, pressing down firmly. Leave to dry overnight before painting and designing. Coloured sticky shapes make pretty designs (Fig. I) Draw a Christmas tree shape on your piece of card and cut out (Fig. 2) Draw round it again and cut out. Paint the trees and decorate. Stick them together, with the plastic straw between. Place a ball of plasticine in the bottom of the tub. Using the brown paper cut out a circle to fit the top of the tub (for the earth). Cut a hole in the middle and push the straw through, and into the plasticine. (Fig. 3) Write each persons name on a piece of paper and stick on the tub front or, on the tree itself. (Fig. 4 ) . Chippy the puppy was bored. He was used to spend ing every morning playing in the garden with Peter, romp ing, digging, getting very dirty but having a lovely time. Now Peter had started nursery school and for two whole mornings every week Chippy was lonely without him. Chippy's real name was Chipolata because he looked like a fat little sausage, but although he was small he knew exactly what he wanted to do. //. wanted to go to school as well. He started to dig. Not just an ordinary hole in the middle of the garden but with little paws working furiously he scratched and scratched by the fence until there was just enough room for him to scramble through. Then he shook himself. My goodness, he thought, that had been hard work! It wasthe first time he had been out alone and everything seemed big and strange, but he snilTcd the lovely smells in the air and decided to carry on with his adventure. Past the garden gates he trotted, his little feet making a llip-llnp sound on the path as he went along."And where are you off lo. Chippy?" It was Spotty-dog playing with his ball in the garden of number ten. "I'm going to school," Chippy told him. "You're going WHERE! Dogs don't go to SCHOOL!" Spotty yapped, then he rolled on his back and kicked his legs in the air to show just how stupid he thought the idea was. But Chippy had said that he was going to school and nothing that Spotty-dog said would make him change his mind. At the crossroads he was frightened by the big cars as they zoomed by but he kept on until he was outside the nursery school. Miss Jones had just finished telling the children a story when she hears the scratching at the door and a tired sound ing "Woof-woof!" "Please let me in," Chippy was trying to say. Miss Jones crossed the room, opened the door and in flopped Chippy looking very pleased with himself. How the childreh laughed when they saw him! "Now you have come to school," said Miss Jones, picking up the little dog and placing him gently on her lap, "you can stay and listen to what I have to say. Dont' you know that it is very naughty for little dogs and children to go out on their own without somebody to look after them? You must remember that. Chippy. Do you understand?" Chippy waggled his ears to show that he did. He knew that Miss Jones was right and that he might have caused a nasty accident as he dashed across the road, or he might have got LOST and never seen Peter and his nice home again. Yes, he was ashamed of him self for being a silly little dog. It had been a busy morning and now he was tired so he settled down to sleep until Peter's mummy came to collect them. But from then on he always remembered that important lesson he learned when he went to school.

It's fun to make your own" decorations for the Christmas tree and you'll find it quite a saving too. All you need IS a

making mobiles
'Mobiles' make attractive decorations at any time of the year but are especially attractive when forming part of the Christmas decorations. All you need are some gay Christmas or birthday cards, silver thread and some knitting needles in 4 different lengths. Thin strips of wood can be used in place of needles if preferred. Paint the wood or needles with gold or silver paint. Choose your cards so that they are paired in different sizes. Then take the smallest length of needle (A), loop a length of silver thread round it and find the centre of balance. Sellotape the thread to the needle at this point. Now thread through the exact centre of the smallest cards and hang then at each end of the needle. Adjust their position of balance before lying securely. Do the same with the next size of needle (B) using larger cards and tie the smaller needle to it in the centre, fixing the point firmly with Sellotape. Repeat the card arrange ment with the next largest needle (C).You now have (B) hanging from (A). Tie (A) at one end of the largest needle (D) and tie (C) at the other end of (D). When you have fastened (A) and (C) to (D) attach a thread-to (D) and find the centre of balance. Fasten thread to needle with Sellotape and suspend from the ceiling using a drawing pin. If you prefer you can cut out stars or fancy shapes, or silhouettes of animals instead of cards. See that all the shapes hang at differing heights to add interest to your finished mobile which will swing round with every breath of air.

little PATIENCE AND SOME SIMPLE MATERIALS. START WITH THE TOP OF THE tree AND A BIG. SHINING STAR. Make IT FROM A POLYSTYRENE CEILING TILE WHICH YOU CAN BUY FOR A FEW PENCE AND WHICH WILL MAKE ONE LARGE AND SEVERAL SMALL STARS. DRAW A STAR SHAPE ON THE TILE AND CUT IT OUT WITH A SHARP POINTED KNIFE. PAINT THE STAR WITH EITHER EMULSION OR j SILVER POSTER PAINT. SPREAD PATCHES OF GLUE ON THE STAR WHEN THE PAINT HAS DRIED AND SPRINKLE SILVER - GLITTER DUST over IT. SILVER FOIL CAN BE USED INSTEAD. M A K E SMALLER STARS IN the SAME WAY. H A N G THEM FROM LOOPS OF DARK GREEN COTTON, SELLOTAPED TO THE BACK.
TWIST P I P E CLEANERS INTO CIRCLES AND TRIANGLES. PASTE SILVER OR GOLD PAPER CIRCLES AND TRIANGLES ONTO THESE, AND TIE FROM THE TOP WITH RED RIBBON so THAT THEY SWING FREELY. S O M E CAN HAVE GLITTER TO ADD to THEIR SPARKLE. FIR CONES TOUCHED WITH G U M AND SPRINKLED WITH 'FROST' LOOK pretty HANGING FROM THE TREE. So D O CUT-OUT CARBOARD SHAPES covered IN COLOURED STICKY tape WITH A METALLIC FINISH. Large BEADS OR BUTTONS TIPPED with G U M AND THEN COATED with VARIOUS GLITTER DUSTS ARE another EFFECTIVE DECORATION. WITH A LITTLE IMAGINATION you can PROBABLY THINK OF LOTS OF other BITS AND PIECES WHICH can be DRESSED-UP TO MAKE ORIGINAL AND COLOURFUL BAUBLES