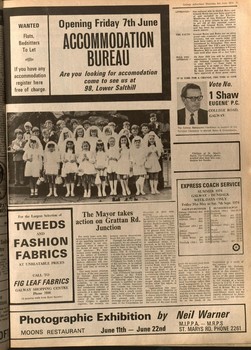 APPROVED ! Our national aim to abolish Rates and Ground Rents has now been approved of and included in t h e Election Manifestos of two Political Parties. This is a great tribute to o u r effort to g e t rid of this national cancer Rates and Ground Rents, which is and has been for centuries causing much misery. THE FACTS Ground Rents and Rates a r e an alien penal code reminder of conquest and evictions, b u t o u r courts today still back these codes, as it was when first introduced by Strongbow. This must be changed! Our T.D.'s and Senators have the power to introduce a Private Members Bill to end all this -- Don't wait until after J u n e 18 -- Act Now ! On J u n e 18th you will be given an opportunity to reject or approve of our National Campaign -- Our fight is your fight! -- Your right to ownership is at stake -- They have all been given the chance to act -- By their silence and inactivity they have approved of these penal codes.

Flats, Bedsitters To Let If you have any accommodation register here free of charge.

Are you looking for accomodation come to see us at 98, Lower Salthill

IT IS TIME FOR A CHANGE, T H E TIME IS NOW

The Galway Ratepayers Candidate in support of the National Campaign to abolish Rates & Groundrents.

The Mayor takes action on Grattan Rd. Junction
For many years now, this newspaper has been conscious of the appalling standards of traffic control in our city, especially when it comes to the design of many of our road junctions. W e have written many leading articles on the subject of Galway's road junctions in the past and we have pledged that the Galway Advertiser will con tinue to campaign for change until such time as action is taken. Our most recent criticism has been of the new junction of Grattan Road/Seapoint Promenade. This junction which, we understand, is now complete, is an absolute danger. Apart from the fact that commercial vehicles of any size cannot negotiate it correctly, it is almost impos sible to see t h e minute, camouflaged, island in t h e centre of t h e road. Cllr. Gerry Colgan, a qualified engineer, has recently ex

discussion at their next meeting. T h e Galway Advertiser con tacted Mr. Graham to discuss his opinion of the junction at Grattan Road/Scapoint Pro menade. H e says: "This junction is an absolute danger in its present form because motorists approaching this pressed serious reservations junction are not pre-warncd of its existence. Obviously, about this new junction. Through the efforts of this the designer of this junction newspaper, we are pleased to is academical rather than announce that steps are being practical, as he has failed to taken'at least, to discuss this view the junction through the eyes of the ordinary motorist. dangerous junction. T h e in motoring Mayor, Cllr. P . O'Flaherty, Anticipation is to raise the question of this means to detect and interpret junction at the next meeting the vital clues in any driving of Galway Corporation. Cllr. situation and act upon the O'Flaherty has made a study information received. App of this junction, as he realises roaching this junction from that lives are in danger of Grattan Road, there is noth being lost unless action is ing to warn the motorist of the danger ahead -- not a taken immediately. Cllr. O'Flaherty has sought warning sign to be seen. Even the advice of M r . Frank a continuous white line down Graham of Graham's School the centre of the road would of Motoring who, in his warn the motorist of the opinion, is qualified to com danger ahead, instead of a ment on Galway junctions. broken white line which, at Mr. Graham has submitted present, exists." "Approaching this junc drawings to the Mayor illus trating how a simple round tion from either Seapoint or about could solve the prob Whitestrand, the centre island lem. Cllr. O'Flaherty is more is almost impossible to see. A than pleased with these simple solution like putting drawings and he is to present diagonal white stripes down same to the Coiporation for the centre of the road would

guide the motorist away from this centre island." "During the hours of dark ness this junction becomes a death trap. Only a few motorists have come to grief at this junction so far but, this has been mainly due to local knowledge rather than good management. It is nowondet that the Mayor, Cllr. Patrick O'Flaherty, is deeply concerned, as he tealises that, with the tourist season shortly reaching its peak, the blood of some innocent tourist may be on the hands of the

Corporation as a result of this junction." We asked M r . Graham, why don't we have round abouts in this country ? " I put this very same question to one of the most eminent and highly qualified engineers in this country at a recent lectuie in U.C.G. I was told that 'roundabouts ate mainly used in Btitain. W c , in this country, are very much a mid-Atlantic island and are equally influenced by Amer ica which docs not advocate roundabouts'."