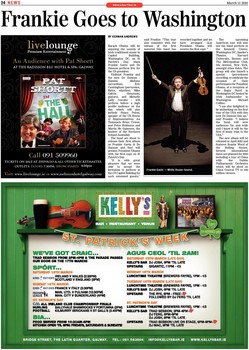 Frankie Goes to Washington
BY KERNAN ANDREWS Barack Obama will be enjoying the sounds of Irish traditional music in Capitol Building, Washington DC, on St Patrick's Day, when Frankie Gavin and De Dannan perform live for the US president. Violinist Frankie and the new De Dannan Damien Mullane (accordion), Eric Cunningham (percussion, flutes, whistles), Mike Galvin (bouzouki, guitars), and Michelle Lally (vocals) - will perform before a high profile audience on the day, which will also include Nancy Pelosi, speaker of the US House of Representatives; An Taoiseach Brian Cowen; and Peter Robinson and Martin Mc Guinness, the leaders of the Northern Ireland Assembly. The band are about to release their first album as Frankie Gavin & De Dannan and they will present President Obama with the first copy on St Patrick's Day. "It is with great pleasure that we were able to accept the invitation to perform at the US Capitol Building for such esteemed guests," said Frankie. "This tour also coincides with the release of the first material this band has recorded together and we have arranged that President Obama will receive the first copy. " The upcoming American tour will also see the band perform in the Kennedy Centre, Washington DC; Sander's Theatre, Harvard University, Boston; and The Metropolitan Club, 5th Avenue, New York, amongst other dates. The group will also launch a special (pre-release) recording, to celebrate the occasion of their performance for President Obama, at a reception at the Regis Hotel in Washington DC hosted by Irish Ambassador to Washington Michael Collins. "I am also delighted to be embarking on the first tour of the USA with this new De Dannan line up," said Frankie. "I believe the band will wow audiences far and wide and I know it will be the first of many trips to the USA." The new album will be released in April 2010 and features Ronnie Wood of the Rolling Stones. Several international dates are planned for 2010 including a tour of China with the Dublin Philharmonic Orchestra which will be aired on China Central TV to 100 million viewers.

An Audience with Pat Shortt
at the RADISSON BLU HOTEL & SPA, GALWAY.