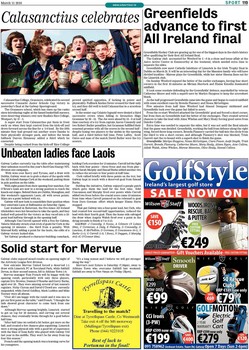 Greenfields Calasanctius celebrates advance to first All Ireland final
Greenfields Hockey Club are gearing up for one of the biggest days in the club's history after qualifying for their first All Ireland final. The Galway club accounted for Wexford by 1 - 0 in a close and tense affair at the Astro Active Centre in Enniscorthy at the weekend, which needed extra time to separate the sides. Greenfields now meet Catholic Inistitute of Limerick in the Irish Trophy final in Dublin on March 21. It will be an interesting day for the Mannion family who will have divided loyalties - Marese plays for Greenfields, while her sister Sheena lines out for the Limerick club. On Sunday Wexford enjoyed the better of the earlier exchanges, forcing four short corners in the first 10 minutes as Miriam Sherlock and Elaine Kinsilla dominated midfield. It took some resolute defending by the Greenfields' defence, marshelled by veteran Catherine Moore and with a superb save by Marlyn Huygens to keep the scoresheet blank. As the half progressed Greenfields came into the game and began to control midfield with some excellent runs by Brenda Flannery and Nessa McGettigan. Five minutes from half time Wexford had Sinead Dempsey sinbinned and Greenfields took over the game but failed to score. From the re-start Wexford attacked the Greenfields' goal and forced a short corner, but from then on Greenfields had the better of the exchanges. They created several chances to take the lead with Alma Whelan and Mary Healy forcing good saves from Deirdre Colfer. Extra time was needed to separate the sides, but it was not until the final minute that the game was decided. Greenfields, working the ball from defence along the right wing, forced three long corners. Brenda Flannery carried the ball into the circle from the third to win a short corner, and although Flannery's shot was blocked, Trish Garrett met the re-bound with a superb shot to finish the game. Greenfields: Marlyn Huygens, Nessa McGettigan, Ciara Power, Aoife Smyth, Trish Garrett, Brenda Flannery, Catherine Moore, Mary Healy, Alison Ryan, Aine Collins, Ailish Walsh, Alma Whelan, Marese Mannion, Olive Healy, Sinead Collins.

Calasanctius College, Oranmore, celebrated its second successive Connacht Junior Schools Cup victory in yesterday's final at the Galway Sportsground. The Oranmore school, which has risen up the ranks since introducing rugby at the famed basketball nursery, were deserving winners over new finalists Rice College, Westport, by 17 - 5. A super start from Calasanctius put them in front early on when they kept control from the kick-off and drove forward across the line for a 5-0 lead. By the 19th minute they had ground out another score thanks to their physically stronger pack, and before the break fullback Darren Hennessy added a third which he converted. Despite being rocked from the kick-off Rice College

proved spirited oppostion, if lacking in power and physicality. Fullback Keelan Dever crossed for their only try, and they did well to hold Calasanctius in a scoreless second half. In the senior cup Colaiste Iognaid were denied a third successive crown when falling to favourites Sligo Grammar by 26 - 11. The Jes were ahead by 11 - 8 at half time courtesy of a try from captain Aaron Conneely and two Robert Butler penalties, but Grammar fulfilled their seasonal promise with all the scores in the second half despite losing two players to the sinbin in the opening half, and a third before full time. Peter Laffey, Scott Oates and man of the match David Butler were the try scorers.

Unbeaten ladies face Laois
Galway Ladies currently top the table after maintaining their unbeaten record in this year's Bord Gais Energy NFL division one campaign. With wins over Kerry and Tyrone, and a draw with Dublin, Galway went on to grab a share of the spoils with the All Ireland champs Cork at the weekend, putting them in pole position on the table. With eight points from their opening four matches, Gay O'Brien's team are now in a strong position to reach the knock-out stages. Behind them are Dublin, Monaghan, and this weekend's opponents Laois, all with seven points. Mayo are a point behind with six. Galway will now look to consolidate their position when they entertain Laois at Ballinasloe on Saturday (2pm). Last weekend in Buttevant, the five-times All Ireland titleholders were hot favourites to take the spoils, and they looked well poised for the victory as they raced into a 10point lead halfway through in the opening half. Although Una Carroll opened with a free for Galway, Valerie Mulcahy struck a hat-trick of goals for Cork in the opening 10 minutes - the third from a penalty. With Mairead Kelly adding a point for the hosts, the odds of a Galway victory looked slim. Yet Galway produced a character-building comeback, holding Cork scoreless for 15 minutes. Carroll led the fight back with four points - three frees and one from play while Sarah Murphy and Sinead Burke added another two to reduce the arrears to four points at half time. Cork rallied briefly with three points on the trot, but Galway kept in touch with a deserved goal from Sinead Burke. Holding the initiative, Galway enjoyed a purple patch which gave them the lead for the first time. Edel Concannon and Murphy fired over points while Carroll added two frees before the crucial score came 10 minutes from time when Carroll pounced on the rebound to goal from Dora Gorman effort which keeper Elaine Harte stopped. That put Galway into a four-point lead, but Cork, who had created few second-half opportunities, reduced the lead with their fourth goal. Then the home side salvaged the draw when Angela Walsh fired over a point in the dying seconds to finish 4-7 to 2-13. GALWAY: J Connolly; S Noone, A Gilmore (N Lohan 59m), C Cormican; A Daly, E Flaherty, G Conneally; D Lawless, R McPhilbin; D Gorman, E Concannon (0-1), S Burke (1-1); U Carroll (1-9, 7 frees), N Duggan, S Murphy (0-2) (G O'Connor 55m).

Solid start for Mervue
Galway clubs enjoyed mixed results on opening night of the Airtricity League first division. New entrants Mervue United forced a deserved 1-1 draw with Limerick FC at Terryland Park, while Salthill Devon, in their second season, fell to Athlone Town 1-0. Mervue manager Tom French will be happy with the opening result, particulatly with only three players, captain Eric Browne, Damien O'Rourke and Gerry Burke, aged over 20. They were missing several of last season's regulars. Nicky Curran and David O'Dowd are currently suspended, while David Goldbey, Mark Ludden and Mike Tierney were all absent. "Over all I am happy with the result and it was nice to get our first point on the table," said French. "I thought the lads showed great character to come back from one down." Although Mervue opening brightly, Limerick started to get on top for 20 minutes, and carving out several chances, they eventually broke through for a goal before half time. "After half time we settled a bit better, got more on the ball, and created a few chances plus equalising. Limerick were a strong physical side with a good bit of experience with the likes of Sean Kelly who played with Galway Utd last year in the middle. They won't be far away from top four this season." French said the opening match was a learning curve for his youngsters. "It's a long season and I believe we will get stronger along the way." Mervue's next fixture is Saturday (7.30pm), away to Athlone Town who overcame Salthill last weekend. Salthill are away to Finn Harps on Friday (8pm).

Best of luck to Portumna in the final!