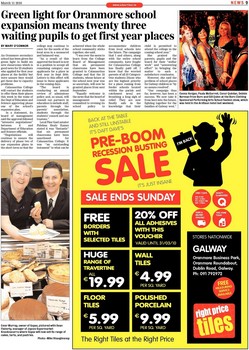 Green light for Oranmore school expansion means twenty three waiting pupils to get first year places
BY MARY O'CONNOR An Oranmore secondary school has been given the green light to build six new classrooms which is good news for 23 students who applied for first year places at the facility but were unsure they would get these due to capacity problems. Calasanctius College will contact the students to offer them their places this week in the wake of the Dept of Education and Science approving phase one of the school's expansion plan. In a statement, its board of management said the approval followed "intensive negotiations" between it and Department of Education and Science officials. "Negotiations will continue to ensure the delivery of phase two of our expansion plans in the short-term so that the college may continue to cater for the needs of the local area in a measured and balanced way. "As a result of this approval the board is now in a position to accept all remaining category one applicants for a place in first year in Sept 2010. Letters to this effect will issue to these applicants in the coming days. "The board is conducting an annual review of admissions policy and, as usual, will consult our partners in education to include staff, parents through the parents' association, students through the students' council and our trustees." Local Fine Gael senator Fidelma Healy Eames stated it was "fantastic" that six permanent classrooms have been sanctioned for Calasanctius College. It was "an outstanding testament" to what can be achieved when the whole school community sticks together, she said. "I was over the moon to learn from the College Board of Management that six permanent classrooms have been granted to Calasanctius College and that the 23 students, whose future at the school next year was so uncertain, will now be granted places from next September. "Equally welcome is the news that the board of management has committed to revising its school policy to accommodate children from local schools into the future. The campaign that I and others, along with the entire school community, have fought for Calasanctius College has finally paid off. I know that the worried parents of all 23 Category One students [those who are the highest priority for a place coming from feeder schools located within the parish and catchment area] are breathing a long sigh of relief. They are now finally safe in the knowledge that their child is permitted to attend the college in the coming school year." She praised the parents, pupils and the board for their "stellar work" and "unwavering effort" in bringing the matter to such a satisfactory conclusion. However, she said the problem of school places for Galway children is "by no means resolved'. "Our campaign thus far, however, has been a success. We now take it from here into the future, fighting together for the families of Galway west."

The Right Tiles at the Right Price