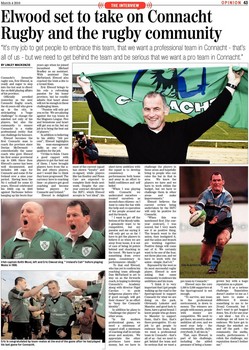 Elwood set to take on Connacht Rugby and the rugby community
"It's my job to get people to embrace this team, that we want a professional team in Connacht - that's all of us - but we need to get behind the team and be serious that we want a pro team in Connacht."
BY LINLEY MACKENZIE Connacht's favourite rugby son, Eric Elwood, is ready and eager to step into the hot seat to direct the on-field playing affairs of his province. Officially unveiled yesterday as the next Connacht Rugby coach, the 41-years-old who grew up in the city, is anticipating a "huge challenge" to change the mindset not only of his players, but also the community to ensure Connacht is a viable professional entity that can challenge for honours. Elwood becomes the first Connacht man to coach the province since Declan McDermott coincidentally the same coach who gave Elwood his first senior provincial cap in 1989. Since then Elwood's career has been well documented, and includes 168 caps for Connacht and some 35 for Ireland over a nine year period. Having been the No 1 outhalf for some 13 years, Elwood celebrated his 100th cap in 2002 against Narbonne before hanging up his boots four years ago when he joined incumbent Michael Bradley as an assistant. With assistant Dan McFarland, Elwood also coached the Irish u-20s to a Grand Slam. Eric Elwood brings to his role a refreshing passion for his home province, but he readily admits that heart alone will not be enough in these challenging times. "Passion will only get you so far. We are playing against the top teams in the Magners League. Fire and brimstone and heart will get you so far, but my job is to bring the best out of players." In addition to believing in his ability "100 per cent", Elwood highlights his man-management skills as one of his qualities for the job. "I'd like to think I have a good rapport with players to get the best out of them. I have brought players here from the u20s and others players, and I would like to think they have progressed. The currency here is coaching time - so players get good coaching and become better players for Connacht and Ireland." Elwood is delighted

most of the current squad has shown "loyalty" and re-signed, while players like Ian Keatley and Fionn Carr are expected to complete their deals next week. Despite the oneyear contract dictated by the IRFU, which Elwood accepts is "not ideal", his

Eric is congratulated by team-mates at the end of the game after he had played his last game for Connacht.

short-term ambition with the squad is to develop consistency in performances both home and away in an effort to build confidence and self belief. "When I was playing with Connacht we underrated ourselves treated ourselves as second-class citizens - so I want to raise the bar with the help and co-operation of the people around me and the branch. " I want to get off the bottom of the bloody table. I genuinely want to be competitive, but my passion and me saying it will only get us so far. I have to get the players to believe it so when we are away from home, it is not of case of being 10 points behind and chucking in the towel. We have to get something from every game, consistency in performances - ideally." To that end Elwood, who has yet to confirm his coaching team although Dan McFarland is set to stay on as the forwards coach, is hoping to develop Connacht's Academy along with director Nigel Carolan to push indigenous players who " if good enough will get their chance" in an effort to "keep the Connacht identity". In addition he plans to "challenge the players" in other areas. "In the modern professional game, we need a minimum of support staff, a minimum of coaching staff in certain areas and analysis. We appreciate the other provinces have more money, but we have to

challenge the players in those areas and hopefully bring in people who can raise the bar in that in area. We know the players we have and we have to work within the budget, but we have to challenge them in other areas and make improvements." Elwood believes the current review being undertaken by the IRFU will only be positive for Connacht. "When this was mentioned first [the oneyear contract], I was scared, but I very much see it as positive thing. The branch went to the union, they instigated it, and the union and branch are working together. Positive things will come out of it. We certainly want to be one of the four, not three plus one, and we have to work with the union - simple, that's it." Espoused by the west as its most successful rugby player, Elwood is now asking that same community to embrace his ambitions and his team. "I think it is very important that I get people walking up the road to the Sportsground to support Connacht for what we are doing on the park. Obviously Leinster and Munster, and good luck to them, have a great brand. I know people who go down to Munster to support them, that's fine, that's there prerogative. It's my job to get people to embrace this team, that we want a professional team in Connacht - that's all of us - but we need to get behind the team and be serious that we want a

(((
Eric in action for Galwegians

pro team in Connacht." Elwood says the core 1,500 to 2,000 supporters at the Sportsground is not enough. "To survive, any team in the professional environment, is down to money. The winners are people with money, people with money are competitive. We need to get there, we need to show ambition all over, and we need your help - the community, media, clubs, everybody. It all ties in." That, says Elwood, is part of his challenge, including the added pressure of being a home-

grown boy with a huge reputation as a player. "I see it as a serious challenge. Reputation doesn't matter to me as I am here to make a difference. It means something to me to be [from] Connacht, but I don't want to get bogged down. Yes, it's for one year - not ideal - but it's a challenge we all have to embrace. We have got to change the mindset on and off the park - the community, the media, results, performances. I relish the challenge, my reputation doesn't bother me."