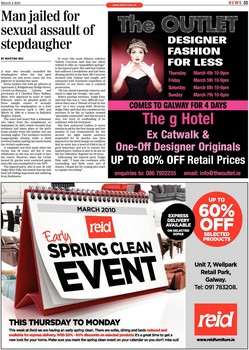 Man jailed for sexual assault of stepdaugher
BY MARTINA NEE A man who sexually assaulted his stepdaughter when she was aged between six and seven years old was jailed for 11 months this week. Kevin Guihen (39) with an address at Apartment 2, Bridgehouse, Bridge Street, Carrick-on-Shannon, Leitrim, and previously of 1 Charlton Flats, Ballina, Mayo, first appeared in court in early February where he pleaded guilty to three sample counts of sexually assaulting his stepdaughter on a date unknown between April 1, 1997 and March 31, 1998 at a house in Ballybrit Heights, Galway. The court had heard that a statement was taken from the complainant on September 24, 2005, which revealed that incidents had taken place at the girl's home usually when the mother was out working nights. Two incidents involved inappropriate kissing while a third involved Guihen putting his hands inside the victim's underwear. A complaint was first made when the victim was 14 years old but it was withdrawn as she was not ready to face the courts. However, when the victim turned 18, gardai were contacted again and a file was resubmitted to the DPP. The injured party, who is now 18, told Judge Mary Fahy last month that she had been left feeling depressed and suffering from flashbacks. In court this week defence solicitor Valerie Corcoran said that her client wished to offer an "unqualified apology" to the injured party. She said that Guihen had suffered a breakdown and had been abusing alcohol at the time. Ms Corcoran stressed that Guihen had sought and continued with treatment regardless of whether or not there was a criminal prosecution. "He has showed genuine remorse and wants to right his wrongs," she said. Before passing sentence, Judge Fahy said that this was a "very difficult case" where there was a "breach of trust by this man" on a very young child. However, Judge Fahy said that she considered the sentence to be fair as Guihen seemed "genuinely remorseful" and that he had a very low level of reoffending if he continues with his treatment. She then sentenced Guihen to seven months in jail for the first charge and four months to run consecutively for the second. An eight month sentence suspended for 12 months was then imposed on the third charge on condition that he enter into a bond of 500 to be of good behaviour and not to contact the injured party. Guihen is also to be put on the Sex Offenders' Register for 10 years. Addressing the injured party Judge Fahy said: "I hope she continues with counselling and finds some sort of closure. I thank her for coming into court to explain everything".

COMES TO GALWAY FOR 4 DAYS