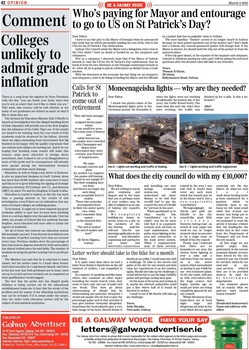 Who's paying for Mayor and entourage to go to US on St Patrick's Day?
Dear Editor, I have to say fair play to the Mayor of Donegal when he announced this week that he will be personally funding the cost of his visit to the USA for the St Patrick's Day celebrations. Galway City Council sends the Mayor and a delegation every year to the USA which I have no doubt is funded by us, the taxpayers and ratepayers. Now as a ratepayer I sincerely hope that if the Mayor of Galway intends to visit the US for the St Patrick's Day celebrations, that he funds it from his own allowance as his Donegal counterpart intends to do. After all, he is going to join in celebrations as distinct from a trade mission. With the downturn in the economy the last thing we, as taxpayers and ratepayers, want to be doing is funding the Mayor and the officials on a junket that has no palpable value to Galway. The once familiar "Yankee" accent is no longer heard in Galway because we have priced ourselves out of the market and I don't think that a Galway city council-sponsored junket will change that. If the Mayor is sincere, he should fund the trip out of his pocket or from his mayoral salary. If the trip goes ahead, at the expense of the taxpayer and ratepayer, I intend to withdraw paying my rates and I will be asking the awkward questions after the dreaded rates bill falls in my letterbox. Yours, Thomas R Glynn, Sli Gheal, Ballymoneen Road, Galway.

BE A GALWAY VOICE

Colleges unlikely to admit grade inflation Calls for St
There is a song from the eighties by Dean Friedman with the line "you can thank your lucky stars that you're not as smart that you'd like to think you are." This week, this country will be told whether or not many of our graduates are indeed as smart as they'd like to think they are. The decision by Education Minister Batt O'Keeffe to launch an investigation into the alleged dumbing down of Irish education will provide one of the first insights into the falseness of the Celtic Tiger era. If the results are found to be wanting, then the cosy world of Irish academia could be shattered by the fallout. Already there are signs emanating from Government that big business is not happy with the quality of graduate that our schools and colleges are turning out. And if we are hoping that boosting exam results will make this country seem more attractive to foreign direct investment, then Ireland is set to be disappointed as news of this probe and its consequences will already have spread among the international business community and done much damage. Education as well as being a key driver of business, is also an important business in itself. Galway alone has more than 20,000 students who come here to learn and this is set to grow following the signing of strategic alliances between NUI,Galway and UL, and between GMIT, its sister ITs and the Kingdom of Saudi Arabia. Education is crucial to Galway so the city has more than a passing interest in the results of this investigation, even if there are no indications that any west of Ireland colleges are inflating grades. To be honest, it ought not to have required any great academic ability to spot that we have been dumbing down to a serious degree over the past decade. Over the 1990s, the people of Ireland did not suddenly become brighter, more educated and more able to tackle the rigours of academia. Yet all of those who entered our education system did seemingly succeed. It has become incredulous now the number of perfect Leaving Certs that are secured every year. Previous studies show the percentage of first class honors degrees awarded in Irish universities has almost trebled since the mid-1990s. The number of students securing the perfect Leaving Cert is up 500 per cent. The Minister has said that he is reluctant to name names, but the matter came to a head when former Intel chief executive Dr Craig Barrett bluntly said twice in the last year that Irish graduates are in many cases not up to scratch and are certainly not as competent as their qualifications would suggest. The fact that the probe into the alleged grade inflation is being carried out by the educational establishment leads one to fear that the extent of the problem and the names of the offending institutions may not be revealed. If it is swept under the carpet, then the entire Irish education system will be the subject of international scepticism.

Patrick to come out of retirement
They slid back amongst us, assigned dream paper values to our small few acres. The runny nose of history now safely beyond use, the snakes were rewarded with Champagne and dickey bows everywhere they went: a twenty year Festival of Acquiescence. We wake to enough concrete and glass for another Los Angeles; the snakes still hissing: "Could we not wangle it?" But their wangling days are done. And there's no longer any such thing as an acceptable level of snakes. Those who yesterday accompanied them in their two-seater sports cars, today don't remember their names, as the clenched fists shout: "The end of snakes! The end of snakes and now!" By Kevin Higgins, Galway

Moneenageisha lights -- why are they needed?
Dear Editor, I attach two photos taken of the Moneenageisha lights prior to the Christmas period. On December 8, when the lights were not working (traditionally the busiest day of the year), the traffic flowed freely. The same time the next day when they were working, the traffic was blocked up for a mile. Is this a nobrainer? JMcC Galway

Dec 8 - Lights not working and traffic is flowing.

What does the city council do with my 10,000?
Dear Editor, We are writing to you in utter confusion and disgust and in the hope that you or perhaps some of your readers may be able to enlighten us on one of Galway city council's 'rules'. We completed building our house in recent years on a site on the outskirts of the city. Having paid the relevant fees for our planning application to the council and thereafter organising and paying for our water and electricity connections and installing our own sewage treatment system you will understand our sheer dismay to be told that we still had to pay the council the sum of 10,000 for 'services in the area'. When questioned as to what exactly this 'contribution' - as it is called - was for, we were told that it is a payment towards such services as road maintenance, foot paths, street lighting in the area, and connection to the main sewer system. When I explained that none of these services existed in the area I was told that it would then cover any such work which the council may do in the future and it was a non-negotiable 'contribution'. We begrudgingly let this be and paid our 10,000 to the city council like good little c i t i z e n s . However, having read an article in your paper last week we can no longer stomach what we perceive to be a huge scam on behalf of the city council. Firstly, may I reiterate that there are no footpaths in our area, the closest street lighting is over a mile and a half away from our house as is the sewer system which necessitated us having to pay 5000 for our own treatment plant. As for the roads, well just as with everywhere else, the huge craters that began months ago as small pot holes are being completely ignored by the city council. Within 200 metres of our home there are at least eight huge and dangerous pot holes in the road which did not appear yesterday nor the day before. So when we read l a s t week about funding havin g been announced for a junction which is relatively close to our home we felt some small relief that at least our money was being put to some use. However, as we continued to read the article it became evident that the funding for the works had in fact come from the Department of Transport and not from the city council. At this stage we are pretty angry that, particularly in the current economic climate, we have been forced by the city council to pay out 10,000 for services which do not exist and in any case, services which if they are to be provided seem to be paid for by Government departments. Can someone please tell us exactly what we paid our hard earned money towards? Yours, (Frustrated homeowner) Name and address with editor

Letter writer should take to the bike for a month
Dear Editor, It is quite some time since we had a letter from Roisin G Steede but on the old chestnut of cyclists, I am compelled to reply. In a manner of speaking and like many others who comment on other topics including the recent church crisis, they seem to have only one can of paint and one brush. They then go about whitewashing or should that be blackwashing one partcular viewpoint. I would ask people who do that to play the percentage game and in that scenario it may give another viewpoint altogether. Sometimes the vocal minority give a very false image of the facts. Should Roisin G Steede go on a bike, I would issue her with a challenge. To take to the streets and paths of the city for one month and then relay her experiences to us the readers, again. Should she take up the challenge, I would advise her to use the high visibility jacket and perhaps cycling hear gear. On the issue of the prom and cycling on it, maybe the relevant authorities could put a line where half of it would be devoted to cyclists. I await to see if Ms Steede will take up my challenge. Yours, John Murphy, Newcastle, Galway

BE A GALWAY VOICE