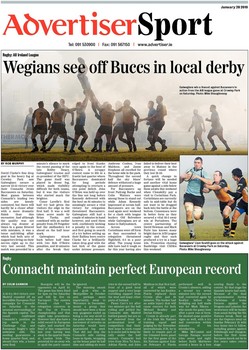 Wegians see off Buccs in local derby
Galwegians win a lineout against Bucaneers in action from the AIB league game at Crowley Park on Saturday. Photo: Mike Shaughnessy

David Clarke's fine drop goal in the heavy fog at Crowley Park saw Galwegians secure a narrow 12-11 victory over their Connacht rivals Buccaneers on Saturday. Most games between Connacht's leading two sides are keenly contested, but there will hardly be a closer affair with a more dramatic finish than this encounter. And although the quality was not always top drawer at times in a game littered with mistakes, it was a tense nail-biting affair which had both sets of supporters living on their nerves right up to the very last second. This match was preceded by a

minute's silence to mark the recent passing of the late Bobby Deacy, Galwegians' trustee and ex-president of the IRFU. The game itself was played in dense fog, which made visibility difficult for both teams, but it was the visitors who started much the brighter. Conor Lavelle's first half try had given the visitors the edge in the first half. It was a well taken score made by Brian Tuohy, and combined with an earlier penalty from JH Potgeiter had the midlanders 8-0 ahead on the half hour mark. Galwegians struck back before half time with two Rob O'Beirn penalties, and 10 minutes after the break they

edged in front thanks once again to the boot of O'Beirn. A scrappy contest came to life in a frantic last quarter where Buccaneers dominated for long periods attempting to overturn a one point deficit. John O'Brien was held up over the line not long before Kennedy delivered with the boot on 81 minutes to seemingly secure a vital victory for relegation threatened Buccaneers. Galwegians still had a couple of minutes in hand however, and used them well, confidently kicking a penalty to the corner, and first going in search of a try before setting up their Ballina born centre Clarke for a brilliantly taken drop goal with the last kick of the game under intense pressure.

Ambrose Conboy, Ivan Muldoon, and Jamie Stephens all excelled for the home side in the pack. Throughout the second half the sky blues' defence withstood a huge amount of pressure. For Buccaneers up front Padraig Burke and Colin Watters were among those to stand out while Adam Kennedy impressed at scrum half. Buccaneers are on the road again next weekend for a clash with league leaders Old Belvedere while Galwegians are at home to Ballynahinch. Across town Corinthians were off form as they succumbed to relegation threatened Highfield, 6-3 in a poor affair. The young home side have had it tough so far this year having also

failed to deliver their best away to Malone in the previous round where they lost 21-10. A quick change in fortune will be needed and another vital home game against a side below them awaits this weekend when Clonakilty pay a visit to Corinthian Park. Corinthians are currently safe in mid-table but do not want to be dragged back into the battle at the bottom. Connemara were in better form as they secured a vital 18-3 away win at Portadown. The centre partnership of David Newman and Mark Foyle has known many bright days in AIB League rugby and they each produced a try in a huge win. Promotion chasing Banbridge visit Clifden this weekend.

Connacht maintain perfect European record
BY COLM GANNON A 10 try, 66-0 victory, over Madrid rounded off an incredible European Pool campaign for Connacht on Saturday in the unusual surroundings of the Spanish capital. The result confirmed Connacht's position as top seeds in the Challenge Cup and European Rugby's only unbeaten side. The seeding guarantees a home quarter final, and, should they win, a home semi final. Bourgoin will be the opponents on April 10. The game has been fixed for 1pm on the Saturday and will be live on Eurosport. The eastern French club has relegation concerns in the Top 14 French championship and that might take precedence. However they also have a solid record in European rugby, and reached the final of this competition last year having won away in the quarter finals at London Irish. The potential for an away win to spoil the party cannot be ignored. The stunning smash and grab wins in Montpellier in October and, perhaps more importantly, away to Worcester in December, meant a group that should have been a three way quagmire ended up being a one way stroll to the point where even the narrowest of victories on Saturday would have guaranteed top seed. That did not stop the Connacht side cutting loose in Spain, wrapping up the bonus point by half time and adding six more tries in the second half in front of a good local support and a very large travelling support from the west and many other parts of Ireland. Fionn Carr's try after two minutes got the ball rolling and settled the Connacht side. Madrid battled gamely but are so far removed from the professional level of competition that their best hope in each round is to score and to keep the tally under the half century. Connacht had tries from Niva Ta'Auso, Adrian Flavin, and John Muldoon in that first half, all of which were converted by Ian Keatley. Flavin replaced Sean Cronin after just 10 minutes. The hooker had an ankle injury that will cause concern for both Michael Bradley and Declan Kidney. Cronin is already part of the Irish Six Nations training squad and judging by the November internationals, if fit, he is likely to remain part of the trimmed down panel for the first game of the Six Nations against Italy on February 6. Flavin performed well in Cronin's absence, adding a second try seven minutes into the second half, converted again by Keatley before the fledgling out half made way for Miah Nikora who needs the game time after a poor run of form. He showed some positive signs as well, with a try and conversion within minutes of his introduction. Mike McComish and George Naoupu scored tries seven and eight before Keith Matthews scored a brace in a free scoring finale to the contest. By that stage the Spanish hearts had sunk. Because of the dual postponements during Christmas of home fixtures against the Dragons and Leinster, the westerners will be busier than usual during the Six Nations break. Next up are the Ospreys away on Sunday February 21 with four home ties to follow, including games against Edinburgh and Glasgow, before the first home European knock out tie in five years takes centre stage.