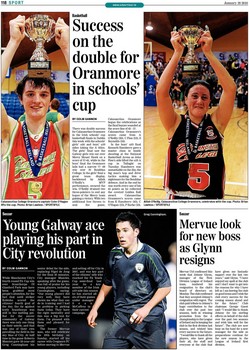 Success on the double for Oranmore in schools' cup
BY COLM GANNON There was double success for Calasanctius Oranmore in the Irish schools' cup basketball finals in Dublin this week with the schools' girls' u16 and boys' u19 sides taking the A titles. The girls' final saw the Galway girls win out over Mercy Mount Hawk on a score of 57-41, while in the boys' final the Oranmore lads had a narrow 77 -69 win over St Benildus College. In the girls' final a great team display, backboned by Ailish O'Reilly's MVP performance, secured the win. O'Reilly drained two three-pointers to end any hopes of the Mercy team gaining a victory. With two additional free throws to seal the game, Calasanctius Oranmore began the celebrations as the final buzzer sounded at the score line of 41 - 57. Calasanctius Oranmore's scores came from A O'Reilly (20), C Finn (12), S Reynolds (10). In the boys' u19 final Kenneth Hansberry gave a master class in inside shooting at the National Basketball Arena as John Finn's side lifted the u19 A cup in Tallaght on Tuesday. Hansberry was unmarkable on the day, the big man's hop and drive tactics making him a nightmare for the Benildus defence. And in the end he was worth every one of his 43 points as he collected the coveted Golden Ball award. Calasanctius Oranmore's scores came from K Hansberry (43), C O'Hagan (13), P Burke (10).

Young Galway ace playing his part in City revolution
BY COLM GANNON While Manchester City's fourth round FA Cup win over Scunthorpe IN Glanford Park may have been grabbed most people's attention, for the fact that until striker Robinho scored the citizens' fourth goal of the day, the tie against lowly Scunthorpe was still in the melting pot. But for the soccer community of Galway there was only one thing on their minds, and that was one of their own patrolling the field in the sky blue of City. At half time in the game Roberto Mancini gave 18-year-old Greg Cunningham his senior debut for the side, replacing Nigel de Jong for the final 45 minutes. City manager Mancini, speaking after the game, was full of praise for his young players, including Cunningham, saying: "Our young players did very well, they have shown me what they can do in training and I had no problem in picking them today. They have the right mentality and this was a big test for them. I'm pleased with them and pleased for them." The former Mervue man, who will celebrate his 19th birthday on Sunday, started off his career with Cregmore FC before moving to Mervue and setting off for City in 2007, and was key part of the citizens' side who reached the FA Youth Cup semi-final last year. As a key member of the Irish u19 side this season he has started all six of their games under manager S e a n McCaffrey in their current campaign.

Mervue look for new boss as Glynn resigns
Mervue Utd confirmed this week that Johnny Glynn, manager of the First Division League of Ireland team, tendered his resignation to the club's board of directors on Monday. The club confirmed that they accepted Johnny's resignation with regret. The club paid tribute to Johnny's huge contribution to the club over the past two seasons, both in winning promotion from the A championship to the League of Ireland and in keeping the club in the first division last season, and wished him every success in the future. "I would like to thank all the players, who have given their all, the staff and everyone at the club that have given me fantastic support over the last two years," said Glynn. "I have enjoyed my spell at the club and I don't want to get into the reasons for why I have left as I am leaving the club on good terms and I wish the club every success for the coming season ahead and for the future." Club chairman George Guest said: "I would like to thank Johnny for his sterling efforts on behalf of the club over the past two seasons and wish him well for the future". The club are now busy on the hunt for a new manager for the side as preparations continue for the new season in the League of Ireland first division.