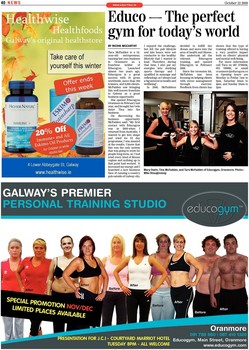 Educo -- The perfect gym for today's world
BY RICHIE MCCARTHY Tara McFadden is a 31year-old entrepreneur, running her own business in Oranmore as a franchise holder of Educogym. Launched almost two years ago, Educogym is a great success with 35 gyms worldwide, more than 100 trainers, and 6,000 clients. McFadden saw bringing this well known franchise to Galway as a great business opportunity. She opened Educogym Oranmore in February last year, and brought her twin sister Tina into the business. On discovering the business opportunity McFadden said: "My first contact with Educogym was in 2000 when I returned from Australia. I wanted to get into shape and tried its 12 day programme, I was amazed at the results. I knew that this was the only system that was going to work for people long-term, as I had tried every kind of fitness regime and nothing up to that point had worked. It increased my energy and I launched a new business then of running a country pub outside of Galway city. I enjoyed the challenge, but felt the pub lifestyle and late hours were not conducive to the healthy lifestyle that I wanted to lead. Therefore, during that time, I also put my energies into studying sports therapy and I qualified in massage and reflexology as I always had a big interest in health and wellbeing". In 2006, McFaddenn decided to fulfill her dream and move into the area of health and fitness. She undertook all the relevant Educogym training, and opened Educogym in February 2008. Since the recession hit, McFadden has been focusing on helping clients with stress management through exercise. Feedback from clients has shown that the type of training offered is having a very positive impact both on clients' physical and mental well-being. For more information call Tara on 087 2798024, 091 788880, or email oranmore@educogym.co m Opening hours are Monday to Friday 7am to 9pm, Saturday 10am to 4pm, and Sunday 10am to 2pm