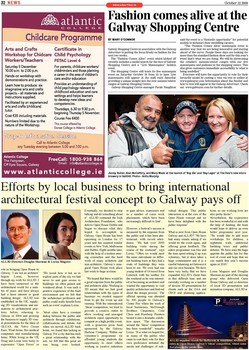 Fashion comes alive at the Galway Shopping Centre
BY MARY O'CONNOR Galway Shopping Centre in association with the Galway Advertiser is putting the focus firmly on fashion for the next two weeks. The "Fashion Comes Alive" event which kicked off recently includes a model search for the face of Galway Shopping Centre and a "Live Mannequins" fashion event. The Shopping Centre will hosts its live mannequin event on Saturday October 31 from 12 to 5pm. Live mannequins will appear at the mall each Saturday providing a unique insight into the new autumn/winter ranges at Galway Shopping Centre. Galway Shopping Centre manager Paraic Naughton said the event is a "fantastic opportunity" for potential models to kickstart their modelling careers. "The `Fashion Comes Alive' mannequin event is another way that we are being innovative and staying ahead of the curve. People these days are looking for more than the standard fashion show and for this year's event that's what we are doing. We will be showcasing the retailers' autumn/winter ranges with our live mannequins and podiums in the shopping centre. This also gives customers immediate accessibility to what is being modelled." Everyone will have the opportunity to vote for their favourite model by casting a vote via text or online at www.galwaysc.com Information about the finalist and how to vote will appear in the Galway Advertiser. Check out www.galwaysc.com for further details.

Efforts by local business to bring international architectural festival concept to Galway pays off
Eventually, we decided to stop talking and do something about it'. ALL3D contacted the Irish Architecture Foundation, who deliver Open House Dublin and began to discuss what they hoped to accomplish in Galway. Open House has been operating in London for 17 years and has inspired similar events in New York, Melbourne and Dublin. Eight months later, with the help of a tireless steering committee and the hard work of many architects and non-architects, Galway's inaugural Open House took place last week to huge acclaim. `We hoped that there would be a good response from the public and architects alike. Working in 3D meant that we had good relationships with the types of business we needed support from to get the event up and running. With the international `Ideas' competition, we tried to provide a creative outlet to allow working and unwaged architects equal opportunity to compete in a high profile event, with a generous prize fund sponsored by the Galway Harbour Company. Within our volunteer's programme we afforded young students the opportunity to meet others working in creative industries to gain advice, experience and in a number of cases work placements, which have been increasingly difficult to find'. However, a festival's success is measured by the response from the public and it has been phenomenal, with record attendance. `We had over 2000 building visits during the course of the weekend", says Lorna. "Often we would meet the same individuals on different building tours as they had a route of buildings they were keen to see. We even had one young student of 14 travel from Limerick with his mother for the weekend as he was interested in becoming an architect and wanted the opportunity to visit quality architecture and find out about the design process.' The official opening was attended by 300 people to Galway's Center Pier where the work of local businesses, McDonagh Brothers Carpenters, Cold Chon and Ramberg Painters turned it into a dramatic exhibition space. `The discussion around the `Ideas' competition has been wonderful", remarks Lorna. "It is what we hoped for, as many of the public who came to cast their vote for their own preference debated the merits and challenges of individual designs. This public interaction is at the core of the Open House concept and we have been delighted with the public response' What is next from Open House Galway and ALL3D? `We have had many emails asking if we would do the event again, and offering great feedback. The entire programme was free and the time spent setting it up was voluntary, but it does takes a huge commitment and it is a careful balancing act between it and our own business. We have been very lucky that we have expanded ALL3D's client base in this difficult time and are currently working on a number of diverse 3D presentations for clients such as the GAA and CROI and planning applications, so our working lives are also pretty hectic". Nevertheless, the experience has been wonderful so and with the help of funding, the team would hope to deliver an even better programme next year. `We would like to add more workshops for children, a nighttime walk, additional building tours and public debates. We have seen the huge appetite the public has for this sort of event and hope that we can match this year's success again in 2010.' Lorna Maguire and Douglas Sherman are part of the steering group who delivered Open House Galway and co-directors of local 3D presentation and animation company, ALL3D.ie

ALL3D Directors Douglas of Edinburgh, then `Open Lorna Maguire, Director Sherman & Lorna Maguire House', ALL3D talks to us about their in London and later Dublin. role in bringing Open House to Galway. `I am not an architect' `We loved how it led us to begins Lorna, `however explore parts of the city we had through my work for ALL3D, I never to and gain access to have been immersed in the buildings we often passed and architectural world for a num- wondered about. It was such a ber of years, and have always positive experience of the built had a keen interest in great environment and we felt that building design'. ALL3D was the architecture profession and established in the UK, supply- public could really benefit from ing 3D visualizations and ani- such an event' explains Lorna. mations to architectural practices before returning to `Most cities have a constant Galway in 2004 and growing dialog between the public and the business to supply 3D visu- architects through exhibitions, al presentations for the likes of collaborations and debate, but GLUAS, the Volvo Ocean when we moved ALL3D back Race, Wind farms, Bio-medical home, we found this lacking in companies and manufacturing Galway. For a city that has such firms. While living in the UK a great relationship with the Doug and Lorna were lucky to arts, we felt that this great art experience `Open Doors' in was being over looked.