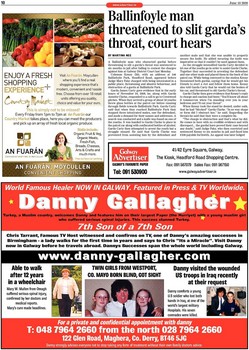 Ballinfoyle man threatened to slit garda's throat, court hears
BY MARTINA NEE A Ballinfoyle man who obsructed gardai before threatening to slit a garda's throat was sentenced to six months in jail after failing to contest the charges against him at Galway District Court last Monday. Coleman Kenny (26), with an address at 144 Ballinfoyle Park, Headford Road, appeared before Judge Mary Fahy charged with being intoxicated in a public place, threatening and abusive behaviour, and obstruction of a garda at Ballinfoyle Park. Garda James Carty gave evidence that in the early hours of November 16, 2008, he, along with Garda Annette Clarke, responded to a call to go to Crestwood pitches. When they arrived a group of about 10 youths threw glass bottles at the patrol car before running through fields towards Ballinfoyle Park. Garda Carty said that when they reached Ballinfoyle Park they stopped three intoxicated males, one the defendant, and made a demand for their names and addresses. A search was conducted and a knife was found on one of the youths. It was handed to Garda Clarke to place in the patrol car along with confiscated bottles of alcohol. Garda Carty then attempted to arrest the youth but a struggle ensued. He said that Garda Clarke was prevented from assisting him by the defendant and another male and that she was unable to properly secure the knife. He added securing the knife was imperative so that it couldn't be used against them. As the struggle intensified Garda Carty decided to let one of the youths go in order to assist Garda Clarke. Together they succeeded in arresting the defendant and one other male and placed them in the back of the patrol car. While being conveyed to the station Kenny threatened both gardai, saying that he would get his friends to start a riot and follow them home. Kenny also told Garda Carty that he would cut the brakes of his car, and threatened to slit Garda Clarke's throat. Garda Clarke then gave evidence that Kenny's reply to charge and caution had been: "You'll know all about it tommorrow when I'm standing over you in your bedroom and I'll cut your throat". When Kenny took the stand he denied, under oath, that he had "blocked" Garda Clarke. "In no way shape or form did I obstruct her," he said. Regarding the threats he said that they were a complete lie. "The charge is obstruction and that's what he did. He comes in here with no credible evidence and with disrespect... the gardai have proved their case beyond any doubt," said Judge Fahy, who then convicted and sentenced Kenny to six months in jail and fined him 100 payable forthwith. An appeal was later lodged

Danny Gallagher
Turkey, a Muslim country, welcomes Danny and features him on their largest Paper (the Hurriyet) with a young muslim girl who suffered serious spinal injuries. This success stunned Turkey.

7th Son of a 7th Son
Chris Tarrant, Famous TV Host witnessed and confirms on TV, one of Danny's amazing successes in Birmingham - a lady walks for the first time in years and says to Chris "Its a Miracle". Visit Danny now in Galway before he travels abroad. Dannys Successes span the whole world including Galway.

www.danny-gallagher.com
Able to walk after 12 years in a wheelchair
Mary W. Mullen from Omagh suffered serious spinal injury, confirmed by her doctors and medical reports. Mary's cure made headlines.

Danny visited the wounded US troops in Iraq recently at their request
Danny comforts a young U.S soldier who lost both hands in Iraq, at one of the world's largest military Hospitals. His seven comrades were killed.

For a private and confidential appointment with danny