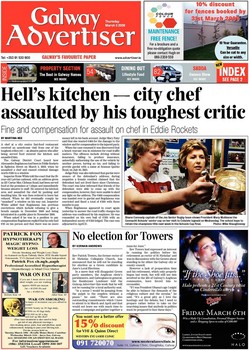 10 Year Guarantee. Versatile Can be cut to any size or width.

PROPERTY SECTION
The Best in Galway Homes
SEE INSIDE

DINING OUT
Lifestyle Food
SEE INSIDE

Hell's kitchen -- city chef assaulted by his toughest critic
Fine and compensation for assault on chef in Eddie Rockets
BY MARTINA NEE A chef at a city centre fast-food restaurant received an unwelcome visit from one of his toughest critics yet -- an abusive patron who after being served food entered the kitchen and assaulted him. The Galway District Court heard how Alexsandrs Bogdanous had been in Eddie Rockets in Eglinton Street on March 1, 2009, when he assaulted a chef and caused criminal damage worth 200 to a window. Inspector Ernie White told the court that the 29year-old Latvian national, with an address given as 227 Cartur Mor, Clybaun Road, had been served food at the premises at 7.40pm and immediately became abusive to staff. He entered the kitchen area and assaulted the chef by pushing and insulting him. He was then ordered to leave but refused. When he did eventually comply he "smashed" a window on his way out. Inspector White added that Bogdanous has previous convictions which include refusing to give a breath sample in December 2008 and being intoxicated in a public place in November 2006. When asked if he was in a position to pay compensation Bogdanous replied that he only had 95 on his person and that there was no more money left in his bank account. Judge Mary Fahy said that she wanted 400 for the damage to the window and for compensation to the injured party. When the case resumed it was discovered that a bench warrant was in existence for road traffic matters. The offences include driving without insurance, failing to produce insurance, unlawfully authorising the use of the vehicle by another person, having no tax, and failing to provide gardai with a name at Seamus Quirke Road, on July 10, 2005. Judge Fahy was also informed that gardai were unsure of the defendant's address; during enquiries a female resident claimed that the defendant had not lived there since Christmas. The court was later informed that friends of the defendant were able to come up with the compensation, however, they were unable to shed any light on the address. The 400 compensation was handed over to gardai and Bogdanous was convicted and fined a total of 300 with three months to pay. When Bogdanous appeared in court again yesterday to answer the road traffic charges his address was confirmed by his employer. He was remanded on his own bail of 300 with an independent surety of 300 lodged. The case was adjourned to April 27.

Shane Conneely captain of the Jes Senior Rugby team shows President Mary McAleese the Connacht Schools' senior cup on her visit to Colaiste Iognaid on Wednesday. The school hope to retain the champions title next week in the Schools Cup final. Photo:-Mike Shaughnessy

No election for Towers
BY KERNAN ANDREWS Rev Patrick Towers, the former rector of St Nicholas Collegiate Church, has announced that he will not be standing for election as a Green candidate in June's Local Elections. In a move that will disappoint Green party members, the Anglican cleric's parishioners, and Galwegians in general, the flamboyant Londoner told the Galway Advertiser this week that he will not be running for a local authority seat. "In a sense I would be jumping from the pulpit to the soapbox without a pause," he said. "There are also outstanding commitments which I have to attend to in March and April and that would not leave me with much time to mount a campaign and gather together a team for June." Rev Towers had expressed an interest in running for politics before his retirement as rector of St Nicholas' and was in discussions with the Greens about standing in for either the Galway city or county council. However a lack of preparation time and his retirement, which only properly began last week, but will still see him involved in the life of Galway's Anglican communion, have forced him to reconsider. "If I was President Obama's age I might be able to balance the demands of the religious culture and the secular," he said. "It's a great pity as I love the hustings and the debate, but I need to prepare rather better to take on the searching issues that anybody in politics must be prepared to face these days."

WAR ON SMOKING
In times of recession can you afford to waste? 3500 Yearly on 20 fags daily, 7000 on 40 fags daily 10,500 on 60 a day and end up like this? (Free laser treatment is also used to help get rid of any physical cravings.) Also treating stress, pain, fear and phobias, sport enhancement, helping to pass your driving test.... Private session held on Tuesday March 10th - Breaffy House Hotel, Castelbar Wednesday March 11th - Jurys Inn, Galway ALL SESSIONS ON AN INDIVIDUAL BASIS

You wont see a better offer