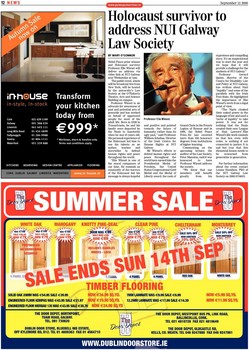 Holocaust survivor to address NUI Galway Law Society
BY MARY O'CONNOR Nobel Peace prize winner and Holocaust survivor Professor Elie Wiesel will deliver an address via video link at NUI Galway next Wednesday at 7pm. The public event, which will be broadcast live from New York, will be hosted by the university's Law Society at the O'Flaherty Theatre, Arts and Science Building on campus. Professor Wiesel is an advocate for awareness of past and potential acts of genocide and has worked on behalf of oppressed people for most of his adult life. Born in 1928 in Transylvania, he and his family were deported by the Nazis to Auschwitz when he was 15 years old. His personal experience of the Holocaust led him to use his talents as an author, teacher and storyteller to defend human rights and peace throughout the world. "Elie Wiesel is one of the moral compasses of our time. He reminds us constantly of the horrors of the Holocaust but his message is always hopeful experience and compelling story. It's an inspirational way to start the year and we hope that it will provide a challenge for the students of NUI Galway." Professor Gerard Quinn, director of the Centre for Disability Law and Policy at NUI Galway, has written about Nazi "legality" and some of the parallels with the Irish Free State. He highlighted the importance of Elie Wiesel's work from a legal point of view. "The Nazis cloaked their naked power in the language of law and used a `tactic of legality' to take power. It was not for nothing that the Nazis created their own `League of Nazi Lawyers'. Elie Wiesel's life work reminds us that law, even with order, is nothing if not connected to justice. It is sad but true that this elemental lesson needs to be re-learned from generation to generation. For further information about the event contact Louise Hamilton, PRO of the NUI Galway Law Society on (086) 0734033.

and positive and pointed towards the future of humanity rather than its ugly past," said Professor William Schabas, Director of the Irish Centre for Human Rights at NUI Galway. Mr Wiesel's efforts to defend human rights and peace throughout the world have earned him the Presidential Medal of Freedom, the United States Congressional Gold Medal and the Medal of Liberty award, the rank of

Grand-Choix in the French Legion of Honour and in 1986, the Nobel Peace Prize. He has received more than 100 honorary degrees from institutions of higher learning. Commenting on the upcoming lecture, the auditor of the Law Society, Peter Mannion, said it was honoured to have Professor Wiesel address the society. "We know that our members will benefit greatly from his