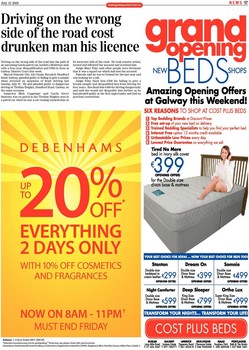 Driving on the wrong side of the road cost drunken man his licence
Driving on the wrong side of the road into the path of an oncoming Garda patrol car, landed a Moldovan man with a four-year disqualification and 900 in fines at Galway District Court this week. Marcel Paierele (31), 150 Cluain Riocaird, Headford Road, Galway, pleaded guilty to failing to give a sample when arrested on suspicion of drink driving last Sunday, July 27. He also pleaded guilty to dangerous driving at Tirellan Heights, Headford Road, Galway, on the same occasion. Inspector Mick Coppinger said Garda Gerry Sweeney was on patrol in the Tirellan Heights area in a patrol car when he saw a car coming towards him on its incorrect side of the road. He took evasive action, turned and followed the accused and arrested him. Judge Mary Fahy said other people were fortunate that it was a squad car which had met the accused. Paierele said he was in Ireland for the last year and was looking for a job. Judge Fahy fined him 500 for failing to give a breath sample and disqualified him from driving for four years. She fined him 400 for driving dangerously and said she would not disqualify him further as he had pleaded guilty at the first opportunity and had no previous convictions.

2 DAYS ONLY
WITH 10% OFF COSMETICS AND FRAGRANCES

NOW ON 8AM - 11PM
MUST END FRIDAY
*Selected concessions may not be participating. Times may vary, please check with your local store. Debenhams Retail (Ireland) Limited trading as Debenhams. Registered in Ireland No 239481. Registered office: Fitzwilton House,Wilton Place, Dublin 2.