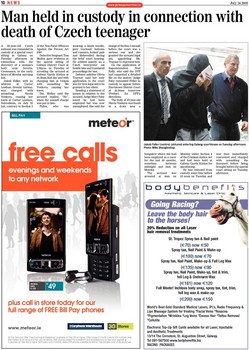 Man held in custody in connection with death of Czech teenager
A 22-year-old Czech national was remanded in custody at a special court sitting in Galway on Tuesday afternoon in connection with the discovery of a woman's body near Inverin, Connemara, in the early hours of Monday morning last. Jakub Fidler, with an address at Cartur Leathan, Inverin, Galway, was charged with assaulting Nicola Vonkova, causing her harm at Cartur Leathan, Indreabhan, on July 21 last, contrary to Section 3 of the Non-Fatal Offences Against the Person Act 1997. Detective Sergeant Tom Molloy gave evidence at the special sitting of Galway District Court at 2.30p.m. on Tuesday of arresting the accused at Galway Garda Station at 11.58am that day and with charging him at 2.16pm with assaulting Ms Vonkova, causing her harm. Det. Molloy said the accused replied, "No", when the assault charge was put to him. Fidler, who was wearing a black hoodie, grey tracksuit bottoms and runners, looked pale and dishevelled during the brief court hearing. He sobbed quietly as a Czech interpreter sat beside him and translated proceedings for him. Defence solicitor Olivia Traynor said her only application to the court was for free legal aid to be granted to her client. Reading a statement of means in relation to the accused, Judge Mary Fahy noted he had been employed but was now unemployed. She said the charge of Section 3 assault before the court was a serious one and she granted the accused legal aid, appointing Ms. Traynor to represent him. On the application of Superintendent Noel Kelly, who said the DPP had requested a detailed file on the matter, Judge Fahy remanded Fidler in custody to appear before Harristown District Court at 10.30am tomorrow (Friday), for DPP's directions. The body of 19-year-old Nicola Vonkova was found in a drain near a

free calls
evenings and weekends to any network

bungalow where she had been employed as a carer for the last 18 months, sometime between midnight and 3am on Monday. The accused was arrested at 4am on

Monday under Section 4 of the Criminal Justice Act and had been held at Galway Garda Station for questioning. He was released from custody some time before 12 noon on Tuesday and

was then immediately rearrested and charged with assaulting the deceased before being brought before the special court sitting on Tuesday afternoon.

plus call in store today for our full range of FREE Bill Pay phones
www.meteor.ie
Bill Pay Network Offer `Free Evenings & Weekends' available on Talk 300 or higher. Offer closes 31/10/08. Calls to ROI numbers only. See meteor.ie for terms and fair use conditions. FREE phones subject to availability and available only to new and upgrading customers on Talk 300 or higher tariff plans until 31/07/08. Nokia N95 phone available for 49 on Talk 600 plan only while stocks last.