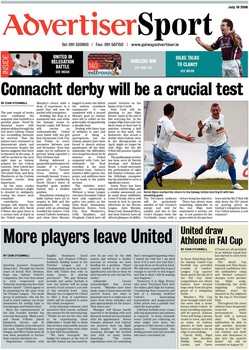 UNITED IN RELEGATION BATTLE
SEE INSIDE

SILKE TALKS TO CLANCY
SEE INSIDE

Connacht derby will be a crucial test
BY CIAN O'CONNELL The past couple of weeks have confirmed the suspicion that football is a peculiar game. Vexed by financial issues with players sliding through the exit doors Galway United are scrambling furiously for survival. That the players have continued to demonstrate pluck and perseverance despite the duress suggests that there is character in the camp. It will be needed in the next eight days as Galway prepare for two critical contests. How United fare against Sligo Rovers at Terryland Park, and Bray Wanderers at the Carlisle Grounds carries deep importance. As the mass exodus continues Galway's plight is clouded in ambiguity. Losing the team's most consistent contributor Gary Deegan will deprive the midfield, and with Derek O'Brien also gone there is a serious lack of depth in the United squad. Alan Murphy's return adds a drop of experience to a panel that will now be packed with youngsters. Avoiding the drop is a mammoth task, and while the damage seems to beyond repair Jeff Kenna still carries on enthusiastically. United must battle with the grit that threatened Cork City last Friday in every encounter between now and November. Even that might not be sufficient to prevent being regraded a First Division club. Having delivered a purposeful performance for chunks of a curious encounter in Turners Cross Galway were eventually burned. It was a grave pity considering Derek Glynn's burst of beautiful goals guided Galway into a healthy position. Nonetheless winning is a habit Galway have yet to acquire in 2008 and the unfamiliarity of being armed with an advantage troubled the visitors. Cork sensed United's hesitancy, and when Dave Mooney bagged to halve the deficit the natives comeback commenced. It was completed with a second Mooney goal as Galway were left to reflect on the grim reality of squandering a sizeable lead. Dealing with these type of setbacks is part and parcel of being a sportsperson, but the Galway players have been forced to absorb serious punishment off the field. Admirably the difficulties were forgotten about for 90 minutes as United competed with Cork, but ultimately the final scoreline is the most pertinent issue. Galway's industry didn't garner any points, and additions have to be made to the points account. The statistics aren't exactly encouraging. Without a home League win since November United have only registered a paltry two points on the Dyke Road. Bohemians, Shamrock Rovers, Cork City, Bray Wanderers, Cobh Ramblers, and Drogheda United have all posted victories on the banks of the Corrib. Paul Cook will be planning to put Sligo Rovers' name at the end of this worrying list. In the League Sligo have only lost three times in their last 14 matches, winning a half dozen in this spell. Faz Kudozovic, who struck a double when Galway were in the Showgrounds in April, might no longer be with Sligo, but the Bit O'Red still possess capable players. The goalkeeping sweater has been worn by Patrick Jennings and Richard Brush. A doubt surrounds the participation of right full Seamus Coleman, and the Killybegs youngster has the potential to carve a significant career. Gavin Peers has been safe and solid for Sligo, and a similar assessment can be made about midfielder Conor O'Grady, who is well versed in how to operate effectively in the Eircom League. Anto Murphy, Brian Cash, Romauld Boco, and Sean Doherty have all offered glimpses of ability.

Derek Glynn marked his return to the Galway United starting XI with two smashing goals. The Terryland audience victory being the objective. town and the Bit O'Red will There has always been skip down the N17 intent will be particularly mindful of Raf Cretaro's something admirable in on pouring petrol on energy and zeal for the way Sligo have Galway's relegation blaze. combat, and due to this maintained a serious set Can United summon a cool Cook's charges enter the up. A raw passion for the response? Corribside venue with a game exists in the garrison

More players leave United
BY CIAN O'CONNELL Sporting journeys frequently bring tears. Through the barren years of brutal First Division, hope was Galway United's companion, but even that seems to have evaporated now. Yesterday morning was the white feather raised? United appear to be preparing for life away from the Premier League. The small group of partisans, who hit the road to watch Galway, can brace themselves for testing trips to Gortakeegan and Station Road. Since the commencement of the July transfer window the news has been grim. Mark Leech and Derek O'Brien joined Shamrock Rovers and St Patrick's Athletic at the tail end of last week. Greg O'Halloran, Gary Deegan, and Wes Charles have all now been permitted to further their careers elsewhere too. Negotiations continue with Regillio Nooitmeer, Daryl Robson, and Stephen O'Flynn. Suddenly fielding teams in the Premier League and A Championship must be an issue. How will United deal with so many losses in playing personnel? The gap between juvenile and senior football is vast, but Galway will be using several of last season's u-21 side at this elevated level. Alan Murphy has re-signed for United to offer a drop of experience which will be required to assist the coltish youngsters. In the statement released, chief executive Nick Leeson, outlined the reasons for the restructuring: "Whilst we are not the only club to be experiencing these difficulties I would like to think that we have acted swiftly and are better equipped than most clubs to deal with the problems. "We have overspent, the budget for players at the end of the 2007 season was increased by over 50 per cent for the 2008 season and without a similar increase in revenue we were heading for a problem. Player salaries needed to be reduced significantly and this is what we have focused on over the last few weeks." Admirably Leeson acknowledged that errors occured. "Mistakes have been made, many of them mine and the current board, but what is important now is to make sure we learn from those mistakes and plan appropriately for the future. That starts now." Manager Jeff Kenna hardly expected to be dealing with such financial turmoil and uncertainty after his appointment. Kenna remains adamant that Galway can preserve their top flight status despite the problems sweeping through the football club with so many bodies departing. "The recent negotiations were not something that I envisaged happening when I joined the club but I am glad most of it is now over and that I can now focus on the job in hand. We still have a squad that is good enough to survive in this league and that is what I will be making sure happens." Tomorrow it is Sligo Rovers who enter Terryland Park with the stakes piled high for Galway. Considering their resources and lack of a winning tradition United's skyscraping expectations and inappropriate ticket prices was a gamble that irked the local public. Full-time football never comes with any guarantees and patience is required. In these unsteady hours United are reflecting on what might have been, the progress of 2007 merely a distant memory. Unfortunately the feeling persists that this stressful tale hasn't concluded yet.

United draw Athlone in FAI Cup
BY CIAN O'CONNELL In these disturbing days for Galway United Cup football has provided crumbs of comfort. League Cup quarter finals and in the last 16 of the FAI Cup these competitions are where Galway have located hope away from the grim grind of a relegation battle. Monday's FAI Cup draw brought relief with the news that a home fixture awaits United. At least travelling expenses will be spared, Athlone Town will bring a decent crowd to town, and with so many ex Galway players in their squad there is certain to be an edge to proceedings. Ciaran Kelly, Nigel Keady, Ian Rossiter, Phillip Reilly, Eric Lavine, and Davie O'Dowd are all sprinkled in an Athlone squad that has started to catch form recently. The shock Cup triumph over Finn Harps injected confidence into the midlanders' camp and Dermot Lennon's charges crave another top flight scalp. Considering the strife engulfing Galway Athlone won't be daunted in the slightest by the trip to Terryland Park. Throughout the years Athlone have frequently reserved gritty performances when faced with a maroon shirt. Will the midlanders be able to add another dynamic display to this list? Or can Galway use their nous and sharpness to slip into the quarter finals? All will be revealed on August 15.