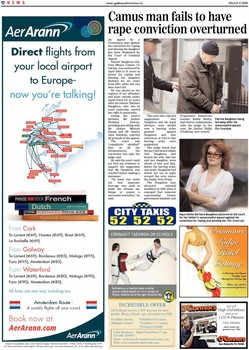 An appeal by a Connemara man against his conviction for raping and abusing his daughter has been dismissed by the Court of Criminal Appeal. Patrick Naughton (52), Cinn Mhara, Camus, Co Galway, was sentenced in April 2002 to 11 years in prison for raping and abusing his daughter Barbara for six years from 1987, when she was nine years old. He was placed on the register of sex offenders and must remain under supervision for 12 years after his release. Barbara Naughton, who was in court yesterday, waived her right to anonymity. Giving the court's decision, Mr Justice Nicholas Kearns, presiding and sitting with Mr Justice Michael Hanna and Mr Justice John Edwards, rejected all grounds of the appeal. The court was "completely satisfied" that, in all the circumstances, the conviction was safe, the judge said. He said the court could not find any evidence to support the suggestion that Ms Naughton was coached before making a statement. "No basis was made out that improper leverage was used to make the witness say things to ensure a successful conviction," he said.

The court also rejected suggestions that Naughton and his legal advisers were misled over a barring order granted against Naughton and that references at trial to this barring order were prejudicial. The judge noted that the jury had heard claims that Naughton had beaten his wife, that she and her daughter were afraid of him and that, before the barring order was made, Naughton had driven his car at night around the area where the family were living. The Naughton case attracted national headlines in 2002 when it emerged that someone representing former government minister and

Patrick Naughton being led away after his unsuccessful appeal. Pic: Courtpix.

Rape victim Barbara Naughton pictured at the court for her father's unsuccessful appeal against his conviction for raping and abusing her. Pic: Court pix

All fares are one way including tax.

Book now at AerArann.com
Subject to availability, terms and conditions apply. Valid for travel from 1st May 2008. A handling fee of 7 for Amex and Diners cards applies, 6 per booking for Visa and Mastercard, 1.50 for debit card bookings