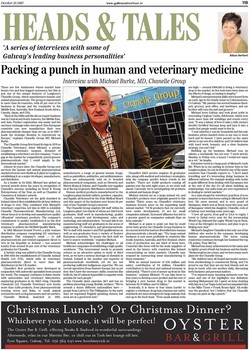 Packing a punch in human and veterinary medicine
Interview with Michael Burke, MD, Chanelle Group
There are few businesses whose market base boasts two and four-legged customers; but this is just one of the unique features of Loughrea's Chanelle Group, which manufactures human and animal pharmaceuticals. The group is represented in more than 80 countries, with 85 per cent of its business in Europe and the remainder in the Middle East, Australia, New Zealand, South Africa, Canada, Japan, and USA. "Back in the 1980s and 90s all our export business was in Central and South America, the Middle East, and Asia. Product registration was easier and the currency exchange rates were good. Non-European countries can now manufacture their own pharmaceuticals cheaper than we can, so in 1997 I made the strategic decision to concentrate on Europe," explains Chanelle Group MD Michael Burke. The Chanelle Group first found its legs in 1979 as Chanelle Veterinary, when Michael, a private Loughrea veterinary surgeon, dreamed of establishing a veterinary service company. "I saw a gap in the market for competitively priced generic pharmaceuticals that I could supply to the international market." Almost 30 years later, the Chanelle Group now services the human and animal pharmaceutical markets from its new 60,000 sq ft plant in Loughrea, establishing it as a major developer, manufacturer, and distributor. As a leader in its field, Michael has picked up several awards down the years in recognition of Chanelle's success, including an Ernst & Young Entrepreneur of the Year, as well as Chamber of Commerce & Industry awards. Chanelle Veterinary set the gold standard in Ireland when it first established its 24-hour delivery of drugs to vets. This, combined with Michael's veterinary expertise, led him in 1985 to establish Chanelle Pharmaceuticals Manufacturing Ltd, whose focus is to develop and manufacture quality `off-patent' veterinary products. The company's commitment to quality established it as the first veterinary pharmaceutical manufacturing company to achieve the ISO9002 Quality Mark. In 1991 Michael formed Provet, a joint venture distribution company comprising 107 veterinary surgeons. This company's remit -- to sell pharmaceuticals and related equipment direct to vets in the Republic or Ireland -- has secured loyalty from around 65 per cent of the veterinary profession for Chanelle. A further wing was added to the Chanelle Group in 1994 with the establishment of Chanelle Animal Health Ltd (UK), which sells 21 veterinary pharmaceuticals direct to more than 140 distributors in the UK market. Chanelle's first products were developed in conjunction with university specialists from around the world. The company continues to liaise closely with universities and veterinary laboratories, employing graduates in its R&D wing, Chanelle Chemicals Ltd. Chanelle Veterinary now stocks more than 5,000 products, from pharmaceuticals treating worm and fluke, to small animal accessories such as dog harnesses and cat carriers. Chanelle Medical, launched in 1993, are high -- around 400,000 to bring a veterinary drug to the market. So few tests have been done on the effects of drugs, so testing is lengthy." Michael's entrepreneurial skills were honed from an early age in the family home in Colemanstown, Co Galway. "My parents ran several business there: pub, grocery, post office, and hardware, and my brother still runs the pub and grocery." Michael loves Galway and took great pride in renovating Cloghan Castle, Kilchreest, which now hosts more than 100 weddings and events every year. "It was a labour of love to take a 13th century derelict fortified Norman keep and turn it into a castle that people would want to live in. "I was raised in a `can-do' household and the only business advice handed down to me was to work hard and be honest. I have passed on the same advice to my own five children, and I do believe that with hard work, honesty, and a clear business strategy, you can't fail." Building up the business, Michael was, he admits, a workaholic, but not now. "I work strictly Monday to Friday now, a luxury I would not enjoy as a vet," he laughs. Extensive travel is a large part of Michael's work life. When he is not putting in 12-hour days in the Loughrea plant, he can be found in any of the many countries that Chanelle exports to. "I don't mind travelling and it's interesting doing business in different cultures. For example dealing with Arabs is quite different from dealing with Europeans, but at the end of the day it's all about building up relationships. Our sales team are very experienced in dealing in varied markets." As a man steeped in veterinary practices, it is no surprise to learn that horse racing is Michael's first love. He owns several, and is very proud of Sindapour, which won at Royal Ascot this year, and of Bamapour which his daughter, Chanelle, rode at a Galway race meeting some years ago. "I love all sports, from golf to GAA to rugby. I travel to Dubai every year for the horseracing World Cup, followed the rugby World Cup in Paris, I was at the Olympics in Greece, and plan to go to Beijing next year." Michael's daughter Chanelle is the only one of his children who works in the company, developing human pharmaceuticals. The horse racing connection continues through her husband the top UK jockey, Tony McCoy. Michael has many achievements to his name and is rightly proud of both his business and his family. "Business gives me a buzz, and we have many more plans for the Chanelle Group. "My children have all forged successful careers, from stockbroking to commercial flying, and I'm proud to say that they are my best friends and we keep in touch with one another daily, discussing both business and personal matters. "I've enjoyed many amazing moments over the years and one of the highlights was definitely meeting Muhammad Ali. I spent an hour chatting with him in a Las Vegas hotel and accompanied him to the Mike Tyson v Frank Bruno fight. Ali really was the greatest, but I believe that the Chanelle Group can pack as big a punch."

manufactures a range of generic human drugs, such as painkillers, antibiotics, and antihistamines. These are subsequently sold on to branded pharmaceutical companies, such as Novartis and Merck Sharp & Dohme, and Chanelle now supplies 14 of the top 15 generic distributors worldwide. Human medical products manufactured in the Loughrea plant include tablets, powders, capsules, and liquids, all licensed by the Irish Medical Board and this aspect of the business now forms 60 per cent of the Chanelle Group's turnover. The Chanelle Group employs 230 staff within its Loughrea plant; two-thirds of whom are third level graduates. Staff work in manufacturing, quality control, research and development, sales and marketing, and administration. "Around 140 of our manufacturing staff are graduates in the areas of engineering, IT, chemistry, and pharmaceuticals. We've staff with master's and PhD qualifications as well as non-graduates from a variety of Eastern European countries. To secure the best staff we have to source worldwide," explains Michael. Michael acknowledges the challenges to all healthcare companies of establishing a high quality workforce. "The Government needs to promote science as an attractive option to study at third level, as we have a serious shortage of chemists in Ireland. Ireland is the number one exporter of pharmaceuticals worldwide, yet we are not producing sufficient indigenous expertise. We can recruit operatives from Eastern Europe, but as yet they don't have the necessary skills; countries like India do, but it's almost impossible to organise work permits for such people." The Chanelle plant operates 24/5 and has no problem attracting young, flexible, workers. "We've around a dozen different nationalities here -- people from Latvia to The Philippines. In the early days we organised English speaking classes, but most are at a good level now."

Chanelle's R&D section employs 30 graduates who, along with medical and veterinary strategists, help the company predict future trends in the market. "There are 15,000 products coming off patents over the next eight years, so we work well ahead. Currently we're investigating 150 products in animal and human drugs." Michael started out as a large animal vet, and Chanelle's products were originally geared to this market. Thirty years on, Chanelle's veterinary business focuses more on the expanding small animal market. "Of 20 products that we currently have under development, 17 are for small companion animals. Increased affluence has led to a greater spend on companion animals than on farm animals." Michael is at pains to point out that he could never have grown the Chanelle Group business to its current level if he had not diversified into human pharmaceuticals a decade ago. "The large animal business is now most profitable in countries like South America, Australia, and New Zealand, where costs of production are one third of those here. Countries like these will be the main suppliers of meat in the future, with countries like Ireland concentrating on niche markets. Chanelle may respond by outsourcing some manufacturing to these countries." With an annual turnover of 50 million and salary contribution of 8 million, Chanelle's contribution to the local and national economy is substantial. "There's a lot of money up-front in this business," explains Michael. "It can take three to four years to develop a new product and the cost of bringing a new human drug to the market is between 0.75 billion and 1 billion." Ironically, it is three or four times harder to register a veterinary drug than a human one: safety standards are more stringent for large animals that end up in the food chain. "Even small animal costs

Christmas Lunch? Or Christmas Dinner?
Whichever you choose, it will be perfect!
The Oyster Bar & Grill, offering Steaks & Seafood in wonderful surroundings. Afterwards, relax in our Martini Bar, or chill out in Tosh late lounge till late. Eyre Square, Galway. Tel: 091 564 041 www.hotelmeyrick.ie