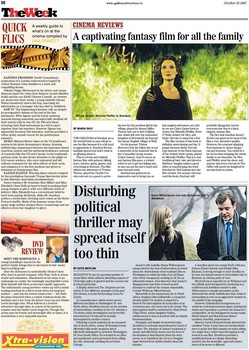 A captivating fantasy film for all the family

EASTERN PROMISES: David Cronenberg's exploration of a London underworld occupied by violent Russian crime families is a stark and compelling drama. Nikolai (Viggo Mortensen) is the driver and corpse disposal expert for crime boss Semyon (Armin MuellerStahl) and his son Kirill (Vincent Cassell). As viewers are drawn into their world, a young midwife (Naomi Watts) tentatively enters the fray, searching for information on a teenager who has died in childbirth. SAW IV: The frightening franchise rolls on despite its protagonist's demise at the end of the last instalment. With Jigsaw and his lovely assistant Amanda having somewhat uncomfortably shuffled off their mortal coils in Saw III, the FBI sets about retracing their final movements in a bid to piece together their last murders. However Jigsaw has apparently foreseen this intrusion, and has provided a rather grisly assault course for his posthumous pursuers. SICKO: Michael Moore takes on the US healthcare system in his latest documentary drama, drawing unflattering comparisons between the insurance-based American system and the universal healthcare systems of countries like the UK and Canada. In his trademark partisan style, he also draws attention to the plight of 9/11 rescue workers, who were uninsured and left without treatment for the after-effects of their work, and compares it to the free medical care given to detainees at Guantanamo Bay. RAZZLE DAZZLE: Warring dance schools compete for the prestigious Sanosafe Troupe Spectacular prize in this hilarious Australian mockumentary. Dance teachers Mr Jonathan (Ben Miller) and Miss Elizabeth (Jane Hall) go head to head in pushing their young charges to glory, with very different styles of delivery. Miss Elizabeth has a conventional belief in hard work paying dividends, while Mr Jonathan prefers a social slant, devising such routes as the Kyoto Protocol shuffle. Much of the humour comes from pushy stage mother Justine (Kerry Armstrong) and her efforts to force her daughter to glory.

THE CREATORS of Stardust are a bit worried that no one will go to see the film because it is a bit hard to pigeonhole it. Stardust fits into multiple genres but that's what is so alluring about it. This is a fresh and original fantasy film with princes, falling stars, witches, goats, ghosts, and everything in between. The film follows the adventure of Tristan Thorne, played by Charlie Cox who sets out on a quest to prove

his love for the prettiest girl in the village, played by Sienna Miller. Thorne sets out to find a falling star which fell over the enchanted kingdom of Stormhold, far beyond the sleepy English village of Wall. On his journey Tristan discovers that the fallen star is not a meteorite as he expected, but in fact a beautiful young woman (Claire Danes). And of course as any fantasy film goes, a wicked witch is out to get the falling star, so she can eat the star's heart and have eternal youth. Stardust has gathered an impressive cast to bring you on

this magical adventure, not only do we see Claire Danes back in action, but Michelle Pfeiffer, Peter O'Toole, Robert De Niro, and Ricky Gervais to name but a few. The film version of this book is definitey entertaining and fun. It jumps between Ricky Gervais type humour to the black humour of the wicked witch Lamia, played by Michelle Pfeiffer. This is a real traditional fairy tale, and director Matthew Vaughn makes a good effort at transforming the book Stardust by Neil Gaiman into the film version. For anyone who has read the book, Stardust will

probably disappoint, but for everyone else this is a dark, elegant, fantasy film. The fact that Stardust doesn't fit into one genre is for most of the film a very attractive quality. However, the constant skipping from humour to `grave danger' can get tiresome. You could do a lot worse than bringing the whole family to see Stardust. De Niro and Pfeiffer steal the show, and anyone who loves Gervais in The Office will surely be delighted to see him back in action.

DVD REVIEW
MEET THE ROBINSONS: A young foundling's search for the perfect family brings him to the future in this wacky time-travelling tale. Meet the Robinsons is undoubtedly Disney's best offer since it parted company with Pixar, both in terms of plot and animation. Abandoned on the steps of an orphanage as a baby, the seemingly unadoptable Lewis finds himself still there as his teen rapidly approach. The enthusiastic young inventor comes up with a mindreading machine in a bid to track down his long-lost mother -- and win the school science fair -- but finds his plans thwarted when a crazed criminal steals the machine and a boy from the future turns up and whisks Lewis through time. What follows is a frenetic adventure through time, in search of the memory scanner and the family Lewis longs for. Though the action may be frantic and downright silly at times, it is nonetheless a very enjoyable journey.

Disturbing political thriller may spread itself too thin
BY KATIE MOYLAN RENDITION IS one of a growing number of recent films which address disturbing aspects of US foreign policy in general and the current war in Iraq in particular. A Mighty Heart and The Kingdom are two recent, if very different, examples of this post 9/11 cinema, as is the forthcoming Lions For Lambs. An ensemble piece which moves across different storylines in Washington DC and North Africa, Rendition focuses on the practice of extraordinary rendition in the US, wherein a US citizen under investigation can be forcibly removed from US soil and be brutally interrogated in another country. Following a bomb explosion in an unnamed city in North Africa, Anwar El-Ibrahimi (Omar Metwally) falls under suspicion and is effectively kidnapped on arrival in Washington DC from South Africa. He is locked in an office and questioned, and is prevented from calling his wife, anxiously awaiting his arrival in Chicago.

Anwar's wife Isabella (Reese Witherspoon), exasperated by the lack of information provided about the whereabouts of her husband, flies to Washington to enlist the help of an old flame, Alan (Peter Sarsgaard), working in DC for an influential senator. Alan discovers that Anwar's disappearance has been covered up and attempts to confront the woman responsible, Corrine Whitman (Meryl Streep). Meanwhile in the anonymous city in North Africa, Douglas (Jake Gyllenhall), a young but already jaded CIA analyst, is required to observe the interrogation by local police of an American man, who turns out to be Anwar. The interrogation itself is conducted by Abasi Fawal (Yigal Naor), whose daughter Fatima, unbeknownst to him, is involved with an Islamic fundamentalism. Strangely, and despite its powerful topic, Rendition is curiously unemotional for much of the time. The injustice of Anwar's treatment is clearly and effectively shown, but the force of his situation is then blunted when the story moves on to Isabella in the US or to Douglas' angst derived from sudden doubts about his mission.

A storyline about two young North Africans, Fatima (Zineb Oukach) and Khalid (Moa Khouas), is strong enough to carry the film on its own, but instead seems to be included only to illustrate an African point of view. Meryl Streep is superbly icy as Whitman and the reliably good Sarsgaard is convincing as a conflicted and ambitious senator's aide. Witherspoon is equally persuasive as the distressed but steely Isabella and Alan Arkin is outstanding as ever as an aggressive senator in the middle of his campaign. However, Gyllenhall is incongruous as a would-be cynical government agent, lacking the depth and expression to portray his character's complexities. As the beleaguered young couple, Zineb Oukach and Moa Khouas deliver excellent, heartfelt, performances. Director Gavin Hood previously directed the excellent Tsotsi. It may have served him better here to adopt that film's simple yet stark telling of a single story, rather than attempting to tell several in one film. Rendition provides a multifaceted look at a deeply disturbing practice, but the ensemble approach means much of its power is diffused.