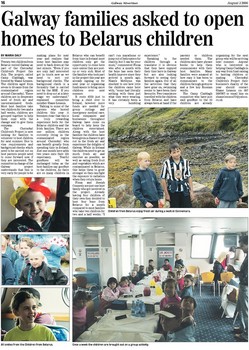 Galway families asked to open homes to Belarus children
BY MARIA DALY Twenty-two children from Belarus visited Galway as part of the Chernobyl Children's Project this July. The project, called Camp Claddagh, was fronted by Shane Lennon. The children aged from seven to 10 came from the contaminated region around Chernobyl. These children are in desperate need of fresh air and uncontaminated foods. Most host families take two children for two and a half weeks, children are grouped together to help them cope with the change and to give them company. The Chernobyl Children's Project is now looking for families to volunteer to host children for next summer. Due to visa requirements and background checks which need to be carried out on host parents people need to come forward now if they are interested. The committee in charge of the Galway project understands that this is very early for people to be making plans for next year and realises that some host families may need to back down at the last minute. "Even if you are only half interested get in touch now as we need to sort out background checks. The background check is a formality that is carried out by the HSE. If you need to drop out at a later stage we understand," explained committee member Shane Lennon. Talking to some of the parents who hosted children this year it becomes clear that this is a truly rewarding experience both for the Belarus children and the Irish families. There are one million children currently living in the contaminated region around Chernobyl who can benefit greatly from spending time in Ireland. Just one month here adds two years onto their life expectancy. Tearful goodbyes will be exchanged today as the host families say goodbye to the children. As there are so many children in Belarus who can benefit from time in Ireland most children only get the opportunity to come here once unless they are postop or very sick. Most of the families who took part in the project this year are already signing up for next year or organising fundraisers to bring more children over next summer. It costs 550 just to bring a child over to Ireland, however more funds are needed for group outings and emergency medical care. Local companies and businesses throughout Galway have come on board to help keep the children entertained. Along with the host families the children have been given a chance to get out in the fresh air and experience the delights of Galway. While in Ireland the children need to get as much fresh air and exercise as possible, as well as eating fresh fruit and vegetables which are contaminated in Belarus, this helps them to grow stronger so they can fight the exposure to radiation when they return home. Fiona and Joseph Conneely are just one host family who got involved in the project. Already having four children of their own they decided to host four boys from Belarus for a month compared to most families who take two children for two and a half weeks. "I can't run marathons or jump out of helicopters for charity, but I can be your mum," commented Fiona who after a month with the boys has seen their health improve since they arrived a month ago. Niamh McGlynn was shocked to see how little the children came here with, "some had literally nothing with them just what they were wearing. It has certainly been a very humbling experience." Speaking to the children through a translator it is obvious that they have enjoyed their time here in Galway but are also looking forward to seeing their families again. Out of all the activities that they have gone on, swimming seems to have been their favourite. Two translators travelled with the children from Belarus and have always been at hand if the parents or children needed them. The children also have phrase books to help them communicate with their host families. Many families were amazed at how easy it has been to communicate to the children through gestures and a few key Russian words. The Camp Claddagh committee who have just said goodbye to the 22 children are already organising for the next group who will be arriving next summer. Anyone who is interested in helping Camp Claddagh in any way from fund-raising to hosting children or making Chernobyl Children's Project their business's charity of the year should contact Shane Lennon on 087 2897957 or email him on shanelennon73@yahoo. co.uk

Children from Belarus enjoy fresh air during a walk in Connemara.

All smiles from the Children from Belarus.

Once a week the children are brought out on a group activity.