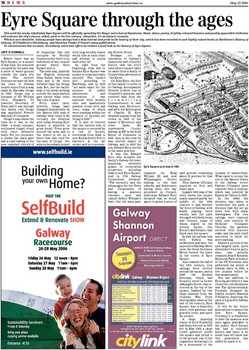 Eyre Square through the ages
This week the newly-refurbished Eyre Square will be officially opened by the Mayor and a host of dignitaries. Music, dance, poetry, brightly-coloured banners and gaudily apparelled celebrants will welcome the city's newest, oldest, park to the 21st century. Altogether, it's an historic occasion. Which is as it should be. Galway people have always had a deep interest and pride in the history of their city, which has been recorded in such highly-valued books as Hardiman's History of Galway, M O'Sullivan's Old Galway, and historian Peader O'Dowd's many publications. To commemorate this occasion, the Galway Advertiser offers its readers a brief look at the history of Eyre Square. JEFF O'CONNELL Before there was an Eyre Square, or a square of any kind, the area now occupied by the park was a piece of waste ground outside the main city gate. The earliest evidence we have for how the town of Galway looked comes from a map made by Barnaby Googe in 1583. Googe was a kinsman of Sir William Cecil, Elizabeth I's powerful Secretary of State, and it was through this family link Googe was appointed Provost Marshall of Connacht. Googe's map shows the town as it was in the 1580s - a small, compact, settlement ringed round with stout defensive walls. For our purposes, it shows the main gate and a road leading to the now vanished church of St Augustine (the site occupied by Forthill Cemetery) but there is no indication of any cleared ground where Eyre Square now is. The next map, made by the English historian John Speed, dates from 1610 and is far more detailed than the Googe map. But, like the earlier map, it too shows nothing outside the main eastern gate except what looks like tufts of grass. Forty years later, however, things have changed dramatically. In the famous 1651 map of Galway what looks to be virtually the identical area today forming Eyre Square is depicted in great detail. Trees grow around the area, and in the centre is set up a fence that was used for the sport of 'tilting' - two men on horseback, armed with long wooden staves would ride at each other and attempt to knock each other off. So right from the beginning, what was to become Eyre Square was a place to relax and enjoy yourself. The 'square plot', according to Hardiman, was in 1630 "set aside apart for the purpose of public amusement and recreation; it was enclosed with wooden rails and handsomely planted round with ash trees, many of which were standing within the memory of persons yet living in 1820." It is also of interest that the eastern side of the square is occupied by a row of houses, stretching from what is now Richardson's Pub to Garvey's at the far corner, and on to presentday Forster Street. Perhaps it's an indication of Galway's chequered and colourful history that the city's centrepiece square takes its name from a family of Cromwellian adventurers - the Eyres. Col John Eyre, the first of this family to settle in Co Galway, accompanied General Ludlow, one of Cromwell's generals, and received land from the C r o m w e l l i a n Commissioners in east Galway, near Eyrecourt, and after the Restoration of Charles II, Eyre obtained a grant from the crown in 1662 of the manor of Eyrecourt and other lands. He represented County Galway as MP in the Irish House of Commons in 1661. Also in this year he was elected mayor of Galway, and in 1663 his son, Edward Eyre, served in the same position. It was this Edward Eyre who founded the family's Galway fortunes, acquiring extensive grants of corporation properties, including what is now Eyre Square. And in 1710 Galway Corporation declared: "The necessity and the advantages for the Town and Corporation of having a spacious entrance open and unbuilt before William's Gate [the old main gate

renamed for King William III and now Williamsgate Street] leading to the east suburbs and Bohermore having been this day presented in Council, Alderman Edward Eyre declared that he would agree to grant a piece of

said ground containing about 30 perches for that purpose." Thus Galway officially acquired its first and finest park. Logan's 1818 map of the town shows the square neatly planted and by the middle of the 19th century it had become the focus of Galway, with bands playing twice weekly and the park thronged with both locals and visitors, many of whom stayed in the several hotels, like Kilroy's and Nolan's, that faced onto the square. In 1851 the railway link with Dublin was established and later the impressive Railway Hotel (now the Great Southern Hotel) formed the jewel in the crown of Eyre Square. Also towards the end of the 19th century, iron railings were erected around the square, and in 1905 the Browne Doorway, which had formerly stood in Lower Abbeygate Street, was reerected at the top of the square, flanked by two large cannons from the Crimean War. From photographs taken at the end of the century, Eyre Square was a beautiful place, with gardens, and graceful trees, and spots for picnics. A large, imposing statue of Lord Dunkellin had been erected in 1873 but in May 1922 a large crowd gathered inside the square and pulled it to the ground, one of the organisers declaring it to be a monument to the

tyranny of landlordism. What came to occupy the site is the famous statue of the Galway writer Padraic O'Conaire (now replaced with a replica), which was unveiled by Eamon de Valera in 1935. In the 1960s the decision was taken to 'modernise' the park, a decision that did not go down well with many Galwegians. The iron railings were removed (they now encircle St Nicholas' Collegiate Church), the gardens covered with concrete slabs, and the park itself narrowed to allow for more parking. Indeed a portion of the new-fangled park, much diminished from its glory days, was actually renamed John F Kennedy Memorial Park in honour of the US President who addressed the people of Galway there in 1963, a few months before he was assassinated. The last addition to Eyre Square before it was closed for refurbishment was The Quincentennial Fountain designed by Dublin sculptor Eamonn O'Doherty, depicting the sails of a graceful Galway Hooker. It will be for future generations to assess the new Eyre Square. Certainly it is wonderful to have the spacious area once again available to the public. Eyre Square has had a colourful history and there is no doubt time will show that this generation has added its mark to it.