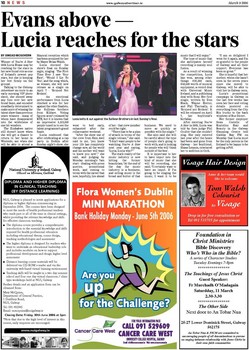 Evans above -- Lucia reaches for the stars
BY SINEAD MCGOVERN Winner of You're A Star 2006 Lucia Evans may be reaching for the stars in her new found role as one of Ireland's newest pop stars, but she is keeping her feet firmly on the ground. Talking to the Galway Advertiser en route to an early morning VIP photo shoot, she shooed away any fuss over her new found fame, and sounded steadfastly determined to make more of winning the talent show than previous years winners - many of whom have disappeared into the wilderness of one-hit wonders. The Zimbabwe native still doesn't know when she will get a chance to return to her home in Westside, nor when she will be able to attend a Mayoral reception which has been promised for her by Mayor Brian Walsh. Lucia stormed the show's final on Sunday night, singing `The First Time Ever I saw Your Face', `Would I Lie To You', and the song which, as winner, she will now release as a single on April 7 - `Bruised Not Broken'. An emotional performance from Lucia clinched a win for her against the other finalists, the Sullivan brothers from Kildare. Voting figures aren't released by RTE, but it is known that an impressive 1,112,000 people tuned in to see the talent programme's grand finale. Lucia confessed that after celebrating at a rap party in Dublin after Sunday night's show, she music that I will enjoy." The type of music that she anticipates herself recording is mainly soul fusion. As a result of winning the competition, Lucia has won, among other things 15,000 cash, 10,000 worth of musical equipment, a record deal with Universal Music Ireland, and a publishing deal with Sony. Her first single, written by Don Black, Wayne Hector, and Phil Thornally, is `Bruised not Broken'. It will be released on April 7, her boyfriend's birthday. After entering You're A Star in 2001, Lucia was told by then judge Phil Coulter that she couldn't sing. She only entered last year after the heats had been and gone from Galway - her boyfriend, Shane Lennon, convinced her to audition in Cork. "I am so delighted I went for it again, and I'm so grateful to the people of Galway and all their support. Everyone has been so great." She is hopeful that her mother, whom she hasn't seen in the seven years since she moved to Galway, will be able to visit her in Galway soon. Lucia's promotional campaign in Galway in the last few weeks has seen her face and voting details postered on everything from the City Bin trucks to the back windows of Bus Direct. Her former employer Sean Costello of Koztellos Hair and Beauty in the Galway Shopping Centre told Galway Bay FM on Monday that Lucia must be the only person in the Ireland to be happy to be getting a P45.

Lucia belts it out against the Sullivan Brothers in last Sunday's final.

went to bed early, exhausted after the rollarcoaster weekend. "After the show one of the crew from Shin Awil said to me, `you know your life has completely change now, all the world and his mother will want to know you now'," she said, and judging by Monday morning's 7am start - dealing with press queries, promotional work, and coming to terms with the career that now, hopefully, lies ahead

of her - that crew member could be right. "There has to be a plan of attack in terms of the single release," she said. "I don't want people to be watching You're A Star next year and saying, `Lucia, Lucia who?'" The stark reality of the music industry is now hitting the former beautician; "At the end of the day the music industry is a business, and selling music is the bread and butter of that

business. We need to move as quickly as possible with the single." She also said she will be careful about the type of people she's going to work with, and is looking for people who will `think outside of the box'. It is important to her to have imput into the kind of music that she will be recording, she said; "I certainly want to have an imput. If I'm going to be singing the music, I want it to be

Visage Hair Design
Anne & her team would like to welcome

DIPLOMA AND HIGHER DIPLOMA IN CLINICAL TEACHING (BY DISTANCE LEARNING)
NUI, Galway is pleased to invite applications for a diploma or higher diploma commencing in September 2006. The courses have been designed to meet the needs of health professional teachers who teach part or all of the time in clinical settings, whilst providing the relevant knowledge and skills for effective classroom teaching.
I

The diploma course provides a comprehensive introduction to the essential knowledge and skills required for health professional education including educational theory, course design, teaching methodologies and assessment The higher diploma is designed for teachers who want to undertake an educational leadership role and includes modules on how to support professional development and design higher level assessment Distance learning course materials will be delivered via CD-ROM e-reader and via the university web-based virtual learning environment Teaching skills will be taught in a two day summer school and four one day virtual classroom / clinic type workshops held at NUI, Galway

Foundation in Christ Ministries
Bible Discovery Who's Who in the Bible?
A series of Character Studies Tuesday Evenings 7-8pm ****************

Further details and an application form can be obtained from: Mary McQuinn, Department of General Practice, 1 Distillery Road, NUI, Galway Tel: 091 492945 Email: mmcquinn@nuigalway.ie Closing Date: Friday, 30th June 2006 at 5pm *Note that due to the high level of interest in this course, early enquiries are encouraged.

Next door to An Tobar Nua
25-27 Lower Dominick Street, Galway 562175
An Tobar Nua & FICM are committed to encouraging people of all denominations to pursue an onging intimate relationship with Jesus Christ in their own faith communities