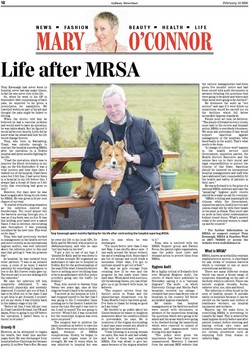 MARY
Tony Kavanagh had never been in hospital, never had any major illness, in fact he was never sick in his life. So, when he went to his GP in September 2004 complaining of back pain, he expected to be given a prescription for painkillers. He travelled widely as part of his job and thought the pain might be linked to driving. When the doctor told him he believed he had a vascular problem and would need to have an operation, he was taken aback. But he figured it would all be over shortly. Little did he know what lay ahead and how his life would change forever. Tony, who lives in Barnaderg, Tuam, was unlucky enough to contract the hospital superbug MRSA after his operation in a Dublin hospital and spent months fighting for his life. "I had the operation, which was to improve the blood circulation in my legs, on the 5th September. It was a total success and nine days later I walked out of the hospital. I had three scars but I felt fine. I had never been in a hospital in my life before this. I always had a dread of them so I felt lucky that everything had gone so well." However, five days later he was back in again after being struck down by MRSA. He was given a 30 per cent chance of survival. "It started with a burning sensation as the infection entered my bloodstream. You could almost feel the bacteria moving through you, it was as if my body was on fire. It was like holding your hand over a naked flame. I was in extreme, excruciating pain throughout. I was pumping morphine by the new time. This went on for days." Tony, who had previously worked in management in the health service and more recently as an international hygiene auditor, was well informed about the infection prior to this and says that getting it "was his greatest fear". In hospital, he was isolated from other patients. "I was in an isolated room, a room of no hope. I waited patiently for something to happen, to live or die. But I never really gave up. The worse part is you are dealing with the unknown." He says the infection left him completely debilitated. "I was absolutely physically and mentally shattered. I couldn't get out of bed, I had to be lifted out to the chair. I had to get help to get dressed, I couldn't put on my shoes. I was literally back in the infancy stage of my life. "Before all this, I was 100 per cent fit, I had travelled Ireland, the UK and Japan. Prior to going to my GP before the operation, I hadn't been to a doctor in 18 years."

O'CONNOR
the various managements had been given five months' notice and had been issued with audit documents in advance detailing the questions that were going to be asked and where and what areas were going to be checked." He dismisses the audit as "not serious" and says if it were follow-up inspections would be carried out on the facilities which fell below acceptable hygiene standards. People must act now, he believes. "The people of Ireland in every county must take to the streets and demand action. MRSA is everybody's business. We must ask politicians if they would support sanctions against management of the hospitals [who fared badly in the audit]. That's what needs to be done. "A change of culture won't happen in the health service until Government, oppostion parties, the Health Service Executive and the unions face up to their moral and legal responsibilities to protect the citizens of this State. Sanctions should be imposed on incompetent hospital managements and staff who have abdicated their responsibility fot the health and safety of patients in their care." He warns Ireland is in the grips of a national MRSA epidemic and says the "appalling" hygiene audit results should be a wake-up call for everyone. "MRSA is killing and maiming Irish citizens while the Government, opposition parties, health service and unions stand idly by with their heads in the sand, in denial. They must take no pride in their silent condemnation behind closed doors. What's needed today is for men and women to stand up and be counted." * For further information on MRSA or support contact Tony Kavanagh, MRSA & Families West at (087) 7945506 or access the website www.wallofsilence.ie

Gravely ill
However, as he attempted to regain his health, fate dealt him another major blow. He was discharged from hospital before Christmas but became gravely ill on New Year's Eve. He says

he owes his life to his local GPs, Dr Kelly and Dr Mitchell, who practice in Abbeyknockmoy, and who he says "put him back on his feet". "I got a clot in one of my legs. I `phoned Dr Kelly and he was down to me within seconds. He organised an ambulance to take me to hospital in Dublin. But for the professionalism of the man I'd be dead. I honestly believe there is nothing more terrifying than to be in an ambulance with four police outriders going into the traffic [in Dublin]." Tony, who moved to Galway from Navan two years ago, says at this stage he found it hard to be optimistic. "I arrived at the hospital at 5.30. I had resigned myself to the fact that I was going to die. I remember them pushing me to the theatre. I asked the nurse the time. She said it was tent to six. I said to myself `I'm not going to survive'. When I did, I was surprised but the consultant surgeon was even more surprised." The surgeon had to perform the same operation as before to save his life. There were other visits to theatre again because of MRSA complications. Slowly, he began to recover and regain some of his strength. He was 11 stone when he was admitted to hospital but was

down to nine when he was discharged. "I'm much better now than I was last May. I can shuffle about now. I can walk around the house without the aid of a walking stick. Some days I am full of energy and could climb a mountain. Other days, I've got to motivate myself to get out of bed." He says he gets courage from recalling how ill he was and the progress he has made since these dark days. When faced with a serious, life threatening illness, you can either give up or go forward with hope, he believes. "The support service from the district nurse in Tuam and the physiotherapy department run by Tuam Health Centre has been great. I've them to thank for being as good as I am today." He decided to go public about his illness because he wants to heighten awareness about the condition which is preventable, he says. He is conscious of the stigma surrounding it and says some people are afraid to admit they have contracted it. "I was listening to a young woman on radio. She was 24 and had a baby and both of them had contacted MRSA. She was afraid to give her name because of the stigma attached

to it." Tony, who is involved with the MRSA Support group and Patient Focus, the patient rights organisation, says the public must unite and demand action to protect them from MRSA.

What is MRSA?
MRSA, known as methicillin-resistant staphylococcus aureus, is shorthand for any strain of common bacteria which is resistant to one or more conventional antibiotics. There are many different strains which can cause a broad range of symptoms depending on the part of the body which is infected. These can include surgical wounds, burns, catheter sites, eye, skin and blood. The infection is often found in the nose of healthy people. It spreads easily in hospitals because it can be carried on the hands and clothes of healthcare workers, on hospital equipment and surfaces. Experts say the main focus in controlling MRSA is preventing its transfer by hand. This is achieved by hand hygiene directly before and after patient contact, before entering and leaving critical care units and isolation rooms, and before carrying out certain procedures such as emptying fluid from drains or catheter bags.

Hygiene Audit
He is highly critical of Ireland's first ever Hospital Hygiene Audit, the results of which were published in November, saying it is a "national disgrace". The audit - in which University College and Merlin Park hospitals received top ratings revealed that more than 90 per cent of hospitals in the country fell below acceptable hygiene standards. He claims that hospital managements at the facilities audited were issued with documents in advance of the inspections detailing the questions which were going to be asked and the areas which were going to be checked during the inspections which were reported to consist of random and unannounced visits during July and August. "The public were given the impression that these visits were unannounced. However, I learned from the national HSE website that