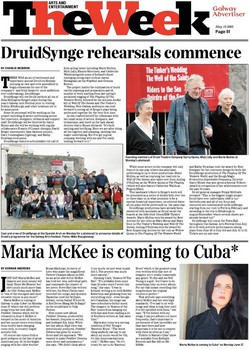 Th W e e ek
ARTS AND ENTERTAINMENT
BY CHARLIE MCBRIDE HERE WAS an air of excitement and expectancy around Druid on Monday morning as cast and crew assembled to begin rehearsals for one of the company's - and Irish theatre's- most ambitious ever undertakings, DruidSynge. DruidSynge will see Druid perform all six of John Millington Synge's plays during this year's Galway Arts Festival prior to visiting Dublin, Edinburgh, and other locations yet to be announced. Some 50 personnel will be working on the project including 30 actors performing across the repertoire, designers, technical and support staff. DruidSynge will be directed by Garry Hynes and she will be working with regular collaborators Francis O'Connor (design), David Bolger (movement), Sam Jackson (music), Davy Cunningham (lighting), and Kathy Strachan (costumes). DruidSynge features a formidable roll call of

Irish acting talent including Marie Mullen, Mick Lally, Eamon Morrissey, and Catherine Walsh alongside some of Ireland's finest emerging young stars such as Aaron Monaghan (as the Playboy) and Gemma Reeves. The project marks the culmination of much careful planning and preparation and 18 months of work starting from last spring's acclaimed staging of The Playboy Of The Western World, followed by the autumn double bill of Well Of The Saints and The Tinker's Wedding. Now Galway audiences can look forward to seeing all of Synge's plays being performed together for the very first time. As she readied herself for rehearsals with her small army of actors, designers, and technicians, and sized up the task ahead, director Garry Hynes declared: "It's both exciting and terrifying. Here we are after doing all the logistics and planning, tackling this major undertaking. But I've got a great company working with me and I'm really looking forward to it."

Cast and crew of DruidSynge at the Spanish Arch on Monday for a photocall to announce details of Druid's programme for the Galway Arts Festival. Photo:-Mike Shaughnessy

While some actors in the company will only feature in one play others can anticipate performing in up to three productions. Marie Mullen, as well as reprising her lead role in Well Of The Saints, also takes over from Aisling O'Sullivan as the Widow Quinn in The Playboy (which will also feature Catherine Walsh as Pegeen Mike). This landmark tribute to Synge's work will be presented as a series of double bills over two or three days or, in what promises to be a special theatrical experience, on selected dates all six plays will be performed on the same day. DruidSynge productions have already been showered with accolades as Druid swept the boards at the 2004 Irish Times/ESB Theatre Awards. Marie Mullen won the award for Best Actress for her roles as Mary Byrne and Mary Doul in The Tinker's Wedding and Well Of The Saints; Aisling O'Sullivan won the award for Best Supporting Actress for her role as Widow Quinn in The Playboy Of The Western World

and Kathy Strachan took the award for Best Designer for her costumes design for both the DruidSynge production of The Playboy Of The Western World, and the Rough Magic Production Improbable Frequency. Director Garry Hynes was also given a Special Tribute Award in recognition of her achievements over the past 30 years. Druid general manager Fergal McGrath revealed: "This is the biggest single project Druid have ever undertaken. 2005 is our thirtieth year and all of our focus and resources are concentrated on DruidSynge, starting from our visit to Perth in February and extending to the trip to Edinburgh in August/September where several shows are already booked out!" DruidSynge will run at the Town Hall throughout the Galway Arts Festival from July 16 to 30 with preview performances taking place from June 29 to July 3rd and July 11 to 15. Tickets are on sale now.

Maria McKee is coming to Cuba*
BY KERNAN ANDREWS UST SAY Maria McKee and chances are most people will think `Show Me Heaven' but she's much much more than that. As USA Today said, McKee is "one of the strongest and most versatile voices in pop music". Maria McKee is coming to Galway to play Cuba* on Monday June 27 where she will perform songs from her new album Peddlin' Dreams which will be released on June 3. McKee is steeped in the music of America and her sound covers everything from soulful hard charging roots-rock, to country tinged acoustic folk. Of course she comes from a good pedigree in the line of great American pop. At 16 she began singing with her older brother

Bryan MacLean, formerly of Love who made the magnificent Forever Changes album in 1967. As an artist and writer McKee has trod her own, individual path and commands the respect of her peers. Steve Earl has written with her, the Dixie Chicks have recorded her songs, and Quentin Tarantino used her brilliant, defiant, rootsy ballad `If Love Is A Red Dress (Hang Me In Rags)' on the soundtrack to Pulp Fiction. Now comes new album Peddlin' Dreams, produced by her bassist, frequent co-writer, and husband Jim Akin. While her last album High Dive was meticulously produced, Peddlin' Dreams has gone for a more direct and live approach. "We wanted to make Peddlin' Dreams more direct and spontaneous," she says. "We didn't think about

it too much; we just went in and did it. The process was much more natural." Opening track, `Season Of The Fair'. "It's probably been more than 20 years since I wrote this song," she says. "I was in Ireland, writing a lot with Robbie Robertson and gleaning from his storytelling style - even though he's Canadian, his songs can have a Southern Gothic mood. The imagery in `Season of the Fair' comes from hanging out with him and from reading a lot of Southern writers at that same time." Maria also turns in a moving rendition of Neil Young's `Barstool Blues'. "The worst thing anybody can say to me about my music would be `Oh, it's like American barroom rock!'," McKee says. "So it's ironic for me to do `Barstool

Blues' which is the greatest song ever written with that sort of imagery yet it totally transcends any genre. To Jim and me Neil Young is a god - but I have to do something risky on every album. For me that meant recording this song because his original version is perfect." That attitude says something about McKee and her own high standards. "I've had to sit with songs and ideas a long time until I've felt satisfied with them," she says. "If I'm honest with my songs, I can put albums out more frequently; that's important to me because of how incredible my fans have been and how important it is for me to connect with them as often as I can." Tickets to Maria's Cuba* show are available from Redlight Records and Bar 903 on 091 565991.

Maria McKee is coming to Cuba* on Monday June 27.